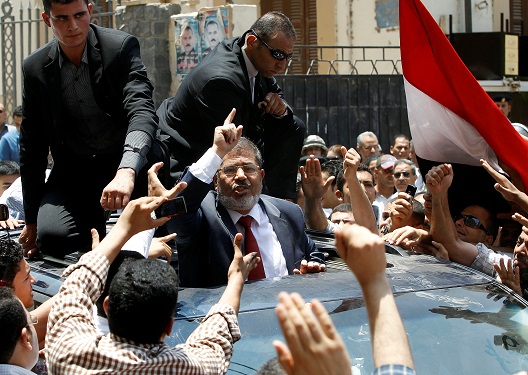 On June 17, 2019 Mohamed Morsi, the first democratically elected president in Egypt, died in court. Joyce Karam, a journalist based in Washington DC, tweets it out. His death released a myriad of emotions—and then the truth became a victim. Yet again.

Most are astonished at his death—he was only sixty-seven years old—and how he died in court, while still in state custody. In sharp contrast to Hosni Mubarak, who ruled Egypt, without any democratic election for three decades, caused untold damage to it, and had also been imprisoned. For much of his imprisonment, he was in a military hospital in an upscale neighbourhood of southern Cairo. Provision for his health was rarely in question. On the other hand, numerous press reports and human rights organisations—including those who were deeply critical of the MB—consistently reported over the last few years that Morsi’s treatment in prison raised deep concerns.

Like those human rights organizations, I wasn’t a fan of Mohammed Morsi. And yet, I was astonished—shocked—by his death.

I was a stringent critic of Morsi’s presidency. My critique wasn’t based in describing him and the Muslim Brotherhood as lesser versions of al-Qaeda, or urging their annihilation. Nor was my critique based on supporting his main opponents, the felool (left-overs) of the Mubarak regime. In fact, I saw Egypt’s best hope for a sustainable and prosperous future in the fulfilment of the 25th of January revolution—a revolution I felt Morsi and the Brotherhood had used for their own power plays.

And yet, when Morsi died, I was indeed quite melancholic—and the extent to which I was surprised me. I mentioned that to a friend, who likewise was also a critic of the Brotherhood, he looked at me and also said: “I’m really sad about Morsi’s death.” A member of the Coptic community, he confirmed that he felt great sadness—and he was also surprised at quite how much sadness he felt.

I pondered that a lot over the following days. At the same time, I was curious to see how other Egyptians, and the world at large, reacted to Morsi’s death. And truth became a victim.

There were those who wanted to deny Morsi ever really even existed as a former Egyptian president. The Egyptian press (see this excellent report by Mada Masr) didn’t refer to him in that way at all. It seemed fanciful to note the death of a president, without referring to the fact that he was a former president—but that was the way it was presented. He just…died. They could not note his passing—so they tried to do it in a way that tried to minimise the historical milestone of his election. His opponents could not bear to note that he was the democratically elected president, so they instead chose to focus and exaggerate his flaws in various propaganda. And truth became a victim.

It isn’t that he didn’t have any faults; I wrote about them many times myself. But these exaggerations to the point of complete myths were hardly useful.

And then his supporters’ hagiography of him began. Once they are done, we may yet see Morsi as the equivalent of Saladin. Only glowing reports of his virtues—again, overdone, and often quite false, ranging from forged versions of his final words, to lists of saintly things he was claimed to have done. Bogus, but hardly any worse that many of the attacks. And truth, again, became a victim.

And as it is a victim that everyone seems to want a piece of, the questions begin. Was the Brotherhood a force for pluralistic democracy, underpinned by a respect for fundamental freedoms and rights? (No.) Was it al-Qaeda in suits? (No.) Wait, how could Egyptians have been pro-revolution and then voted for the Brotherhood, and then supported a military takeover? It’s so much easier to explain this all in in 2019 than it was in 2013. Just by saying: “How could Americans vote for a Black-American president, and then vote in an apologist for white supremacists?” Orientalist undertones will permeate—and the truth is still a victim.

The official narrative is that only Brotherhood supporters saw Morsi’s passing as the culmination of a sad tale—and they are at a failure to explain why Queen Noor of Jordan issued condolences on Twitter: “RIP first and only democratically elected President of #Egypt #Morsi.” The Queen was on a bit of a roll, actually: shortly thereafter, she Tweeted out a BBC story that was suitably titled: “BBC News – Egypt Morsi TV gaffe puts spotlight on control of media.” There wasn’t anyone who could claim the Queen of Jordan was an MB sympathiser after all—and the story was hard to discount.

And when all is said and done, and interest in Egypt fades away from the international news cycle, few outside of the country are going to be talking about the continuing problems that face Egypt. Supporters of the Brotherhood will claim it was the best thing to happen to Egypt, and their opponents will say it was the worst disaster to befall it.

As I pondered, I was reminded there are still people and institutions that take the truth seriously. So, as I was asked about the truth, as an analyst and academic, I kept reminding others—if one is truly interested in learning about Egypt and keeping up to date with what happens in Egypt, then follow good sources.

Follow independent sites like Mada Masr; human rights organisations like the Egyptian Initiative for Personal Rights, or the Arab Network for Human Rights Information. Rely on Egyptian journalists in wires like the Associated Press, such as Maggie Michael; or in Reuters, like Amina Ismail; or Heba Saleh who writes for the Financial Times, and likewise Heba Mahfouz of the Washington Post; or the likes of Dina Ezzat and Amira Howeidy. Or on the truly empathetic non-Egyptian correspondents that actually care about the country, such as Ruth Michaelson of the Guardian, or Jared Malsin of the Wall Street Journal. I would have noted Bel Trew of the Independent and the Times, except she was deported from Egypt, after having built a life in Cairo over a decade—with more love for the country than I can put into words. And there are so many others—who put themselves at risk, whether as rights defenders or journalists, to bear witness—to the truth.

If the truth is to be upheld as a value in and of itself, rather than something to be sacrificed on the altar of one’s politics, then it is to such witnesses to whom we ought to turn. Truth may well be a victim—but it persists. And it does not go quietly into the night—and neither should we.

H.A. Hellyer is a non-resident senior fellow at the Rafik Hariri Center for the Middle East at the Atlantic Council. A senior associate fellow at the Royal United Services Institute in the UK, he is the author of “A Revolution Undone: Egypt’s Road Beyond Revolt”, “Muslims of Europe: the ‘Other’ Europeans”, and “The Islamic Tradition and the Human Rights Discourse”. A visiting professor at the UTM Centre for the Advanced Study of Islam, Science and Civilization in Malaysia, he previously led the Rafik Hariri Centre’s Religion and Human Rights project at the Atlantic Council, which examined the engagement between Islam and the human rights discourse, supported by the Carnegie Corporation in New York.

Image: Photo: Presidential candidate Mohamed Morsy of the Muslim Brotherhood waves to his supporters after casting his vote at a polling station in a school in Al-Sharqya, 60 km (37 miles) northeast of Cairo June 16, 2012. REUTERS/Ahmed Jadallah