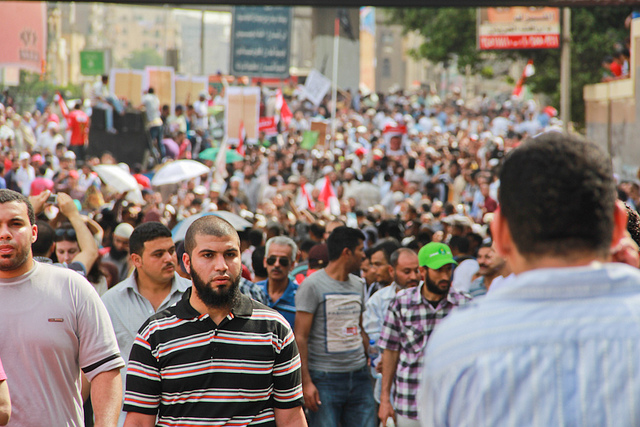 Egypt’s constitution, drafted by an Islamist-dominated committee and pushed through by a bizarre voting process in which the constituent assembly worked into the early hours of the morning, approving article after article at breakneck speed, introduced a vague definition of what it means to be Egyptian. There are however a few key elements cemented by the constitution; it characterizes Egypt as a Sunni Muslim country whose values are rooted in family and religion, but gives no real definition as to what those values are. Recent incidents in Egypt have brought to light how dangerous constitutionally-sanctioned and vague definitions, approved by only 16% of Egypt’s eligible voters, can be when put into practice.

Under the Supreme Council of the Armed Forces, xenophobia ran rampant, aided in large part by conspiracy theories that foreign elements were attempting to infiltrate Egypt and destroy the country. Under President Mohamed Morsi, the definition of xenophobia has expanded far beyond holding a foreign passport. Today, the same conspiracies continue to be heard as the latest outbreak of sectarian violence is blamed on foreign elements. The president himself, in his now infamous speech, spoke of chopping off foreign fingers attempting to infiltrate the country. The difference now is that this rhetoric is increasingly being applied to Egyptians as well.

The second and third articles of the constitution clearly outline the definition of the Egyptian citizen as a believer in one of the three monotheistic religions: Islam, Christianity or Judaism. These articles also define the source of Egyptian legislation as Sharia, while for Christians and Jews, the source of legislation for personal status laws and religious affairs are defined by their own religious laws. Article 219 drills down further, defining Sharia in explicitly Sunni terms.

Article 219 has served as a source of legitimization for Salafi-led protests against a perceived Shi’a threat, exacerbated by renewed relations between Egypt and Iran. Salafi groups organized conferences warning against the threat of the spread of Shi’ism in Egypt, while also besieging the home of the Iranian chargé d’affaires in Cairo. Its direct effect on Egyptian citizens, those same citizens protected by their newly ratified constitution, can be seen in the investigation of an Al-Azhar student in Assiut, accused of being Shi’a, despite the fact that there are no laws in Egypt that would allow for legal action to be taken against her if that were in fact the case.

Shi’a Muslims are not the only ones finding themselves on the receiving end of worrying rhetoric. Baha’i Egyptians, a minority that is often forgotten, have also been sidelined. Any mention of Bahai’s in Egypt is often in a negative context, and their legal status remains shaky. In an article originally published on one of the Muslim Brotherhood’s official websites in 2008, Sayed Nezeily described Baha’is as apostates and their beliefs as “perverse ideas.” Earlier this year Salafi leader Abdel Moneim Abdel-Shahat claimed that Bahai’s pose a threat to national security, while in practice, Egypt’s Baha’i community find difficulty in enrolling in schools. Hossam Bahgat, Executive Director of the Egyptian Initiative for Personal Rights points to another problem Baha’is face in Egypt, “The main issue facing the community is the fact that the state doesn’t recognize the Baha’i marriage so all ID cards issued for Baha’is recognize their marital status as single.”

The use of increasingly hostile rhetoric where foreigners are concerned, the constitution’s vague definition of Egyptian values, and the prosecutor-general’s statements encouraging citizen arrests, which he later claimed were misconstrued, all facilitated the citizen arrest of Dutch journalist Rena Netjes, in Cairo, under suspicion of espionage. While she was released the next day, the report filed against her stated that she posed a threat to Egypt and was “attempting to spread Western culture.”

This is, however, by no means the first instance of citizen arrests and vigilantism under Morsi’s rule. Alber Saber found his home surrounded by a mob demanding his arrest for allegedly sharing the anti-Muslim film, “Innocence of Muslims”, on his Facebook page. Saber was subsequently arrested and charged with insulting religion. While the verdict sentencing him to three years in prison has been upheld, he left Egypt while out on bail pending his appeal. A case like Saber’s, while ruled on before the constitution passed, has been further legitimized by the constitution’s blasphemy clause which states, “Insult or abuse of all religious messengers and prophets shall be prohibited.”

A security vacuum has also brought about a disturbing side to Egypt’s vigilantism, with mobs not only conducting citizen arrests, but also doling out the punishment, which in some extreme cases has involved the brutal beating to death of several men.

While Prime Minister Hisham Qandil announced that the government has requested amendments to the constitution be made by legal experts, there is no indication of which clauses are to be amended, and there is also no guarantee that the amendments will actually be applied.

In barely 5 months, the negative consequences of a constitution written and passed without true consensus have come to light. A compromised judiciary, a security vacuum, and an ongoing struggle over the future of the prosecutor-general have compounded the situation, while Egypt’s economy continues to falter. While Qandil’s announcement has been described as a gesture to the opposition, it will take far more than a gesture to come out of the current deadlock Egypt’s political parties find themselves in. The constitution is the very basis for the country and amending it through consensus is the very first step to placing Egypt on the path to recovery.