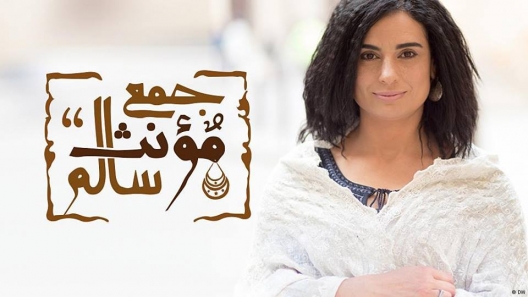 After a two year hiatus, outspoken television host Reem Maged returned to Egypt’s TV screens, hosting a new program in which she interviews inspirational Egyptian women. Her return was short-lived, with the show suspended after the airing of just two episodes. On May 15, Maged said that ONtv’s director informed her that the third episode of Gamea Moa’nath Salem, will not be aired the next day due to pressure from a “sovereign authority.” A joint production between ONtv, owned by Egyptian business tycoon Naguib Sawiris, and German television channel Deutche Welle (DW), the third episode of the show aired on May 16 on DW alone.

For three decades under the rule of former President Hosni Mubarak, the term “sovereign authority” was used to refer to either the presidency or General Intelligence Service, or Mukhabarat. In Maged’s case, however, no one has officially confirmed the identity of the “sovereign authority” behind the decision. The sudden suspension of the program, together with Maged’s reputation as a fierce critic of the army, have led many to speculate that ONtv’s decision reflects increased pressure by the state to limit freedom of expression in Egypt.

Maged was not the only government critic to disappear from screens shortly after the army intervened on July 3, 2013, removing former President Mohamed Morsi following massive popular protests. Yousry Foda who also worked for ONtv, Hafez Mirazi who presented a show for Dream TV, and prominent political comedian, Bassem Youssef, top the list of those who suspended their programs in the past year.

In an article titled, “A girl that scares the government,” ONA news agency, which is affiliated with the television channel, ONtv, was the first to break the news. According to ONA, “Informed sources inside ONtv confirmed they were subject to strong pressure from security and sovereign authorities to stop the show, Gamea Moa’nath Salem.” The sources expressed their surprise at the decision, considering that the show was not at all political.

DW quickly issued a strongly worded statement condemning the decision. The statement said the ban was “a flagrant aggression against freedom of opinion and the press.” It also “confirmed its support for ONtv in its effort to continue producing and airing the program through all available means.”

Maged’s new program indeed centers on the telling of stories of pioneering Egyptian women and their struggles. References to the January 25 revolution, however, were present in both episodes that aired. In the first episode, she hosted prominent researcher Shahira Mehrez. Asked by Maged about the best day she could recall, Mehrez replied, “January 25 was the most beautiful day in my life.”

The second episode, heavy with political content as Maged interviewed the young photojournalist. Eman Helal, likely caused her trouble. Helal said the true start of her career coincided with the January 25 Revolution, as she shared photos she took during the uprising with the audience. When asked about the most dangerous event she covered, and what scared her as a woman, Helal referred to the dragging and brutal beating of a young veiled woman in the middle of Tahrir Square by soldiers in late 2011, as she was stripped half naked. A photograph of the scene was shown as she spoke. Bloody pictures taken during clashes between the army and Brotherhood supporters three days after Morsi’s removal were also displayed during the program. Nearly sixty people were killed outside the Republican Guard headquarters—Morsi supporters were accused of attempting to storm the building, believing the former president was being held inside. While Helal’s own photos were deleted by Brotherhood supporters that day, photos taken of Helal standing in the midst of dead bodies were shown. Helal also recalled her personal experience on August 14, during the violent dispersal of the pro-Morsi sit-in at Raba’a al-Adaweya. “I saw a small truck coming from Raba’a full of corpses and blood was dripping from the car,” Helal said.

Shortly after the ONA news agency report came out on Friday, Maged spoke on two popular television shows, including an interview with ONtv’s own Liliane Daoud.  She said that senior ONtv officials informed her that they were exposed to pressure from authorities to stop airing her show and that they were seeking to counter those pressures. “The channel’s director informed me officially on Thursday, May 14, that they will not be able to air the third episode,” she said in an interview with Mahmoud Saad on al-Nahar TV. “I do feel a lot of pain that I’m being personally targeted, and that I have no space on Egyptian television screens,” she added. She said, “We should not accept any authority that acts like a guardian on the Egyptian people telling them what they should watch, and what they should not watch.”

However, just seven hours after ONA’s report, ONtv issued an official statement late Friday, offering a different explanation. “The channel confirms that Reem Maged’s show was not suspended, but it was postponed until we finalize a new plan restructuring the lineup of our programs. Although the channel’s policy is to refuse to comment on rumors, our respect for our colleague Reem Maged forced us to make this clarification.”

ONtv’s owner, Sawiris, explicitly denied in statements to Egypt’s private daily, Al-Masry Al-Youm, in which he is also a shareholder, that he had received any instructions from a sovereign authority to stop Maged’s show. “I’m not the kind of person who gets instructions from anyone, and I will never allow that,” he said. Sawiris claimed that the main reason for suspending Maged’s show was that “She did not get a single advertisement.” He added, “I respect Reem Maged and appreciate her, but she has an obsession with something called sovereign authority.”

However, Sawiris made no mention of the plan to restructure ONtv’s programs as noted in the channel’s official statement, and ignored that, with the exception of one program, the channel in reality airs very few ads. Maged immediately came out with a counter statement, noting that her program had been announced in an official joint news conference with DW on April 8, and was preceded by an intensive promotional campaign as the first joint program that would be aired on the two channels. “How was the agreement reached on airing the program on the two channels, with specific dates, if ONtv had a plan to restructure the lineup of its programs?” Maged asked.

An ONtv official conceded in statements to EgyptSource that the second episode clearly angered security authorities. “We received furious calls from senior security officials saying Maged should not be allowed to continue her propaganda against the army,” the source said on condition of anonymity.

On Monday, one of Reem Maged’s unofficial Facebook fan pages echoed similar worries in a recent post: “Do you believe the content of the second episode and speaking about the dispersal of the Raba’a sit-in was the reason behind the banning of my show on ONtv?” While many fans supported that view, her critics gloated over the fact that she will no longer appear on TV. “To hell with you and all those who stand against our national army,” one commenter said.

Much of the defense of Maged’s show has been to say that it was not political in nature. Speaking to Liliane Daoud when the program was first suspended, Maged rejected this defense. She explained, “It’s like we’re saying that there are certain subjects that should be banned, and others that shouldn’t.”