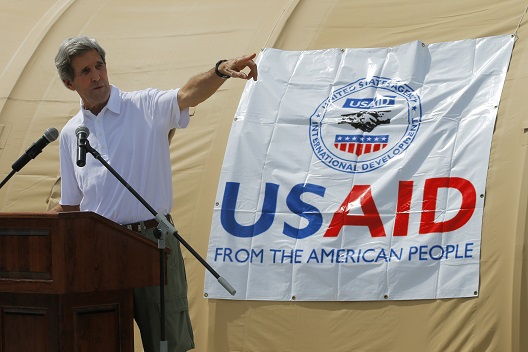 U.S. Secretary of State John Kerry delivers remarks during a tour of the damage from super typhoon Haiyan in Tacloban December 18, 2013. Kerry announced that the U.S. government, through USAID, will provide an additional nearly $25 million humanitarian aid for the survivors of super typhoon Haiyan, which decimated towns and villages around Tacloban on November 8, killing more than 6,000 people and displacing 4 million. REUTERS/Brian Snyder

The Trump Administration intends to shrink the United States’ foreign aid budget in 2018, cutting the amount of money available for foreign development and humanitarian aid. President Trump’s proposed cuts come amid a shift to national security focused foreign policy, known by the administration as the “America First” policy. Under this framework, money currently allocated to the United Agency for International Development (USAID) and other foreign aid initiatives would be reallocated to defense and other national security related budgets.

More important than budget cuts, the administration is also likely considering folding USAID into the Department of State (DoS). A USAID-DoS merger is a major move with far more significant long term implications than simple cuts to the aid budget.

These moves have resulted in pushback from Congress, particularly in the Senate, where some Republican Senators, including Senators Lindsey Graham and Marco Rubio, have joined their Democratic counterparts in criticizing the administration’s proposed budget changes. Despite some bi-partisan opposition to Trump’s proposed aid cuts, it is plausible that a bill including some of the proposed cuts would pass both the House and the Senate, given the Republican Party’s control of both bodies.

Outside of Congress, the proposed cuts and organizational changes has caused backlash from the international aid community, both within USAID and among the various foreign aid focused non-governmental organizations. Several members of the international aid community have privately voiced concerns about the cuts, saying that it wouldn’t necessarily result in reform, but would significantly hamper US aid efforts abroad. It is also important to note that, while the United States spends a large amount of money on aid relative to other countries, it fails to meet the Organization for Economic Co-operation and Development’s target of 0.7% of Gross National Income spent on development aid. Furthermore, compared to several European countries, such as Sweden and Norway, the US spends far less on aid relative to the size of its economy. Given these facts, US development aid spending is not excessively high compared to other developed countries and is not seriously in need of cuts.

Nonetheless, the budget cuts are not the biggest issue the aid community is concerned about. USAID’s budget has been cut in the past by various administrations, and the organization was largely able to adapt even if aid efforts suffered. However, the Trump Administration’s proposed merger, which would place USAID under DoS control, would effectively place aid on the political backburner. One development specialist expressed concern that humanitarian aid would risk becoming secondary in nature to the political goals of the Department of State—leading to aid becoming simply a tool to achieve foreign policy goals—rather than for genuine humanitarian goals.

Other than fears of aid politicization, several aid specialists expressed concerns that the proposed merger would not occur in a smooth and timely fashion due to organizational culture differences between USAID and DoS. Lessons learned from other countries mergers of aid agencies and foreign affairs agencies suggest that a simple, smooth merger is unlikely. Canada, the United Kingdom, New Zealand, and Australia have all implemented such a merger in the past with largely poor results.

For example, Australia in 2013 merged the Australian Agency for International Development (AusAid) into the Australian Department of Foreign Affairs and Trade (DFAT), a merger roughly analogous to the USAID-DoS merger being suggested by the Trump Administration. The move was not popular among AusAid employees, and organizational culture and ideological differences between the two organizations slowed and hampered an effective integration. In 2015, nearly 2 years after the merger, internal problems within the Human Resources department in the now merged AusAid and DFAT continued to make headlines. A source familiar with the integration between AusAid and DFAT noted that the merger did not prevent further cuts to aid budgets, as AusAid had less ability to indirectly influence the budgeting process when subordinate to DFAT.

While opposed to such a large organizational change to USAID, few aid specialists say that everything is fine in USAID and the broader aid community at large. However, rather than the drastic measure of an USAID-DoS merger, many suggest an alternative approach of reforming USAID. One common suggestion is to de-corporatize aid, setting up mechanisms to ensure government aid funding is not just used to secure contracts for American contractors without having much actual impact on the ground in communities of need.

Another generally agreed upon reform would be to prioritize aid projects which would result in self-sustaining communities, rather than short-term, immediate, needs-based humanitarian aid. This would also involve a rearrangement of aid planning, allowing for a more “bottom up” approach where local civil society and activists have more of a voice on which types of projects aid funding would be best deployed on. Such an approach would prevent the spending on aid projects that do not actually meet relevant needs for a community or area.

Essentially, most international development specialists and aid workers feel that it would be best for aid efforts if aid is kept independent of government foreign policy and diplomacy wings, in this case USAID and the Department of State. These budgetary and organizational changes would also significantly reduce the level of support the United States provides to refugee populations in the Middle East. Slashing aid budgets would likely exacerbate the refugee crisis in the region, adversely affecting regional stability not just in the Middle East, which is experiencing one of its worst refugee crisis in recent memory, but Europe as well.

It is clear the Trump Administration’s proposed cuts to aid—but more importantly its plans for reorganizing USAID under DoS—would not result in a more effective or more efficient government. In fact, it would do the opposite, creating a merged organization with contradictory and unclear goals that is less able to deliver effective aid. Indeed, reform, rather than major organizational changes or budget cuts, is the solution to the aid community’s problems.

Rao Komar is an intern at the Atlantic Council Rafik Hariri Center for the Middle East.