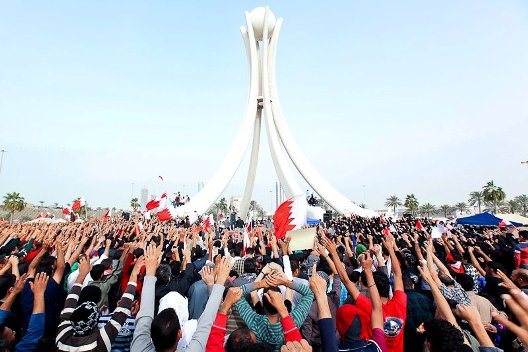 The use of more violent means of confrontation in Bahrain is becoming more prevalent—at least on the part of a minority of anti-regime groups—as state security forces continue to use repressive measures against dissidents, employing beatings, tear gas, and birdshot on otherwise peaceful demonstrators. The deterioration in security has also created space for extremism to rear its head. On February 14, amidst protests marking the third anniversary of Bahrain’s uprising, the militant group al-Ashtar Brigades bombed a minibus carrying police officers in Dih west of Manama, wounding several; another bombing targeted police near the country’s airport, killing one. On Monday, another bombing occurred during confrontations with protesters.

The situation in Bahrain—coupled with an obstinate lack of movement from Bahrain’s international partners—is wholly unsustainable. Unlike other Gulf States, Bahrain’s monarchy has a much narrower scope of loyal elites with which to collude and far more modest coffers with which to offset popular grievances.

The government of Bahrain dominates the country’s wealth, granting access to economic opportunity primarily to the ruling family, their political partners, and other loyalists, which are almost exclusively Sunni. Such a policy excludes the disenfranchised, predominantly Shia, population. (It’s worth noting, however, that Bahrain has numerous Sunni critics, but with limited influence.) Despite the government’s efforts to naturalize large swaths of Sunnis from abroad, the autocratic political order in Bahrain still faces this demographic threat. Due to such concerns, the government has to import foreign nationals to participate in security forces, preferring to bar indigenous Shia from service.

However, Bahrain’s ability to finance these schemes faces  serious challenges. Making up 60 percent of the government’s revenues, the country’s oil reserves are expected to last little more than a decade. Despite the government’s efforts to diversify assets away from oil and into banking and finance, there remains a shadow looming over the end of Bahrain’s petroleum sector. Serious economic challenges compounded with ongoing political crises will only signal a further deterioration of the state’s ability to contain protests and police violent actors effectively.

Bahrain is becoming less free at the same time that demonstrators are getting more desperate and increasingly resorting to violent forms of protest; this is no coincidence. Without serious reforms—the kind the regime has thus far avoided—Bahraini society is likely to further to unravel. Bahrain’s mainstream, moderate opposition remains committed to nonviolence, but support for these groups continues to diminish as the populace loses confidence in the government’s willingness to reform. Though al-Ashtar Brigades are still on the fringe, the February 14 Youth Coalition, a larger group known for more violent forms of protests, gained increased popularity.

It is possible that violent anti-government groups will step up violent attacks, and seek more sophisticated arms beyond burning tires and Molotov cocktails. The regime constantly claims that Iran is supporting the uprising, accusations that are  mostly unevidenced and doubted by the US Embassy in Bahrain. However, the concern of foreign meddling may be a legitimate worry if Bahrain continues on this path and the population’s legitimate grievances are not addressed.

If security and stability were to dramatically deteriorate in Bahrain, other Gulf states would likely provide immediate economic support, with probable military intervention from Saudi Arabia, as happened in 2011. But this scenario also presents problems for the West, which has kept its involvement at arms length. While the United Nations has repeatedly acknowledged and condemned abuses in Bahrain, its western supporters have yet to consider larger changes in policy. In the case of the United States, they’ve only recently announced an expansion of the fleet stationed on the island, and have put forth no indication that they have an alternative plan should the situation deteriorate further in Bahrain.

International actors must move to push the government of Bahrain to implement the reforms to which it has already committed. The government-formed Bahrain Independent Commission of Inquiry (BICI) made numerous recommendations, many of which remain incomplete or wholly unimplemented. Recently, European Union’s parliament passed a  resolution condemning Bahrain’s abuses and called upon the implementation of the BICI report; Bahrain’s government  responded obstinately, claiming to have already implemented the recommendations and showed no signs that it is considering real reform. Given the lack of consequences tied to these condemnations, Bahrain views its international ties as intact, its domestic policies requiring no genuine political recalculation.

Pro-democracy powers must impress upon the government of Bahrain that reform is the only way to avert further instability. The United States should be particularly adamant. A long-term volatile political climate would jeopardize both the position of the US Navy’s 5th fleet stationed in Bahraini waters and the vital interests of Bahrain’s immediate neighbors. Using those relationships to advocate for genuine and inclusive reforms in Bahrain, pro-democracy powers can encourage positive political change while safeguarding important national interests—as well as defending the United States’ values. Key regional supporters, particularly Saudi Arabia, must also realize that while Bahrain’s abusive system of government has thus far survived the uprising, it is impossible to support this status quo indefinitely.

Bahrain’s allies have two choices: push for reform now, while the opposition remains predominantly nonviolent and moderate and the government is capable of maintaining stability; or scramble for reform later as the opposition grows more violent and intractable and the strength of the government deteriorates. In the first instance, political outcomes are more predictable and require less intensive investment to offset the pains of transition; in the second, extremist groups may find a new port in the storm.