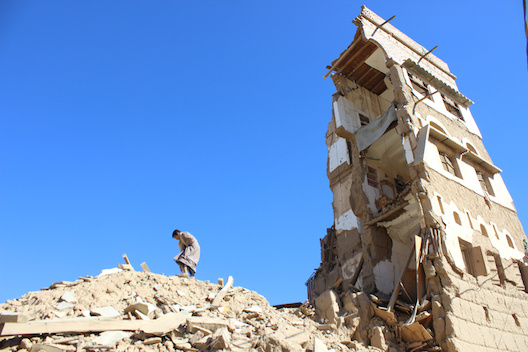 A boy walks on the rubble of a house destroyed by a recent Saudi-led air strike in the northwestern city of Saada, Yemen January 4, 2017. REUTERS/Naif Rahma

Six years ago today, the Yemeni people erupted in a Day of Rage against a corrupt regime to demand equal rights, but the transitional process faltered leading to the now nearly two-year-old conflict between Houthi rebels allied with former president Ali Abdullah Saleh and the government-in-exile led by President Abdrabbo Mansour Hadi backed by Saudi Arabia. Continuing clashes have delivered a brutal humanitarian crisis, an economy on the verge of collapse, and over 10,000 Yemeni deaths according to UN figures. It may seem antithetical to discuss issues of transitional justice while Yemen struggles with an ongoing war, but the conflict is slowly creeping toward an inevitable stalemate. Repeated international efforts to reach a peace agreement, while as yet unsuccessful, have never been closer, but the need to address widespread grievances will gather momentum and likely determine the sustainability of any political agreement. Yemen’s complex social fabric—composed of factional, tribal, and local dynamics—has frayed over the course of the conflict, with systematic abuses of human rights and international law driving a wedge between centers of gravity within the various communities. Unless Yemenis (with the support of international actors) develop a plan now to address these grievances, they will undermine any future stability and potentially drive otherwise peaceful citizens into the embrace of armed groups.

Transitional justice, as defined by the International Center for Transitional Justice (ICTJ), “is rooted in accountability and redress for victims” of human rights abuses too widespread and systematic for the judicial system of post-conflict countries to handle. In the case of Yemen, one can easily imagine how different military, paramilitary, jihadist, and tribal groups have focused solely on their objectives at the cost of the civilian population, creating additional motivations to take up arms to either exact revenge or protect what they have left. Add to that an international dimension—wherein Saudi Arabia drops US-made bombs on military and non-military targets, Iranian rhetoric (at minimum) ensures continued and costly engagement, and transnational jihadists entrench themselves in the lawless vacuum—and it is easy to see how Yemen’s societal foundations have been profoundly shaken. Even if the fighting stops tomorrow, the multitude of injustices against different groups by different perpetrators will leave lasting scars that require reconciliation to repair the social fabric and restore trust in state institutions.

As a nation, Yemen is no stranger to reconciliation practices. Tribal elders have a centuries-old tribal system of conflict resolution and frequently employed customary law and practices within and between communities and the government to resolve disputes and reduce tensions. Even those in urban setting tended to use tribal conflict resolution due to their efficiency and transparency in enforcing accountability. Most recently, Marib tribal elder Ali Hassan Bin Gharib issued a ruling ending a 40-year-old land dispute between two sub-tribes of the region that claimed scores of lives on both sides. While generally leading to positive results, they take place in an informal framework that undermines the legitimacy of the state. By contrast, the formal judicial system traditionally has not enjoyed much legitimacy over the decades, given the corruption and abuse of the courts under Ali Abdullah Saleh’s regime to further his political interests and shore up his patronage network. Since the outbreak of the current conflict, the judicial system has all but collapsed, with many of Yemen’s courts either shuttered or open only part time in the face of insecurity. Amid the factional fighting, the local press commonly reports on kidnappings and assassinations of Yemeni judges.

In this stressed judicial environment, the need for a legitimate and well-planned transitional justice process to support a future peace agreement cannot be overstated—but it is not without its pitfalls. In the aftermath of the Yemen uprising that began almost six years ago to the day, the National Dialogue Conference (NDC)—which sought to restore peace by providing a platform for all representatives of Yemenis to redefine the citizen-state relationship—included a working group to address human rights violations, truth seeking, and reconciliation. Previous research on the NDC’s Transitional Justice Committee demonstrated significant differences among the participants on the scope and focus of such efforts, including: whether to address human rights violations dating back to Yemen’s pre-unification era, immunity provisions for former government and party officials, and whether to prioritize retributive or restorative measures. Yemeni political elites played an obstructionist role in the process leading to a stalemate on the draft law for transitional justice. These disagreements also took place against a backdrop of international engagement more focused on restoring security in the shortest time possible. Many of the same obstacles will remain after the bombs stop falling—in addition to new ones as a result of the most recent fighting.

With the benefit of hindsight, it is possible to get a head start on finding the appropriate mechanism to address different grievances without hurrying the process. In fact, one of the main drivers that led to the current crisis includes the pressure placed on Yemeni officials to rush to peace. The immunity granted to Ali Abdullah Saleh and prominent members of his regime through the post-uprising GCC agreement, the deal that ended the revolution and mapped out the transitional period, left his regime mostly intact. It set deadlines that put pressure on participants to conclude the NDC, prompting Hadi to bypass agreed-upon NDC rules to set up a Yemeni federalist state. The Houthi overzealousness to right these wrongs through force rather than arbitration drew Saudi Arabia into the conflict and left the Houthi home province of Saada little more than rubble. It also crystalized the Southern Movement—furious at a result that essentially ignored the demand for more autonomy—into armed popular resistance committees that will undoubtedly be difficult to disarm and has strengthened the South’s secessionist impulse. A less rigid process would alleviate the pressure to reach a resolution for its own sake and promote a more thoughtful outcome.

A positive aspect of the Hadi-Houthi conflict is the shift in the political reality in Yemen that may create the space for a better transitional justice process. The popular discontent with Hadi will undoubtedly diminish his influence in a unity government. While Saleh would seek a place for his family to reengage in Yemen’s politics, Saudi Arabia would not permit his full return. Houthi rebels would have to have a space at the table, but only if they demobilize. Even so, many Yemenis blame the Houthis for the recent devastation. This opens the space for neutral actors and civil society to steer a transitional justice process and mitigate the disconnect felt by the public during the last go-around. While the NDC’s transitional justice committee included representatives for youth and women supported by civil society, the wider public (even those in Sana’a) viewed it as an international project divorced from their own reality. Robust international support, particularly from the “Quad” (including Saudi Arabia, the United Arab Emirates, the United States, and the United Kingdom), and technical assistance from the UN will be needed, but local and tribal organizations could help better define transitional justice in the Yemeni context and the parameters of the process to avoid previous deadlock and deliver the appropriate messaging—and ownership—to their communities.

Perhaps the most damaging aspect of the last transitional justice committee was its inability to settle on a truth commission. Often in protracted conflicts such as in Yemen, a country that has essentially suffered from conflict since the 1960s, perpetrators later become victims and vice versa. With nearly all parties aggrieved, justice on such a mass scale at minimum requires an acknowledgement of wrongdoing to foster forgiveness and eventual reconciliation. Whatever the process, it must contain a truth commission supported by documentation and wide-ranging testimony—even if it results in a lack of criminal liability. To that end, the United Nations must (again) press for an independent international commission of inquiry acceptable to Yemen’s diverse groups to assess rights violations across the country. These truth commissions are the historical centerpieces of most successful transitional justice processes. Although the post-apartheid Truth and Reconciliation Commission in South Africa—by far the most cited example of a successful process—suffered its share of controversy and by no means united the country, it nonetheless provided a marker for a healing process that would allow the country to look forward and structure its institutions to ensure no repeat of the crimes witnessed since 1960 would ever take place. Similar processes in Chile (1990), Germany (1992), and Morocco (2004) all featured an accounting for the truth as a central theme to promote healing. Given Yemen’s history of conflict, a sustained peace will greatly depend on a commitment in the peace agreement, national recognition of the crimes committed by all sides, and the structural changes that will prevent their recurrence.

Should international efforts succeed in pushing the UN roadmap to fruition, it would allow Yemenis to return to their own to rebuild their country. Although the NDC had its flaws and detractors, it nonetheless represents a starting point for a return to accountability for Yemen’s torn communities. The tendency to turn to revenge-seeking tactics in the aftermath of the Hadi-Houthi conflict will peak immediately after the agreement, underscoring the need for the final roadmap to expressly contain a commitment to pursue and prioritize transitional justice. This places the United Nations at the front and center of peace-building, but the ownership of the process must belong to Yemenis. Most importantly, the international community can best support transitional justice by a deft and nuanced emphasis on compromise and patience—applying appropriate pressure on spoilers of the past—rather than focus on deadlines and stability. Although the current conflict has done damage that will take decades to repair, it also provides a second chance to acknowledge the painful truths of the past from which Yemen can begin to look forward.

Tarek Radwan is a Nonresident Fellow with the Atlantic Council’s Rafik Hariri Center for the Middle East.