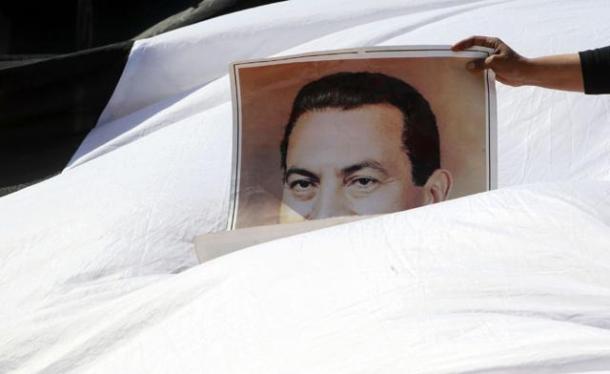 The first thought that comes to mind when reading Bradley Hope’s Last Days of the Pharaoh is that Hosni Mubarak is a human being. Over the past year and a half, this is a fact that has become all too easy to forget. We see him only as the tyrant, so full of arrogant pride that his name was carefully stitched over and over into thin white lines in the pinstripe suits he wore. In Hope’s account of the last few days of Mubarak’s rule, we are given a glimpse of the ‘man’ rather than one of the ‘president.’

Through conversations with former government officials, Mubarak’s personal makeup artist, journalists, and other Egyptians at the forefront of the 18 day uprising, Hope paints a picture of the former president that others have ignored. The opening chapter begins with a quote attributed to Mubarak: “You mean they are going to kill me?” According to Hope, Mubarak said this to Hossam Badrawi, the last secretary general of Mubarak’s National Democratic Party, and the architect behind Wael Ghonim’s release from prison. The statement marks the turning point, when Mubarak came to the realization that the January 2011 protests were unlike any the country had witnessed in the history of his reign.

Hope depicts Badrawi, a prominent figure in the account, as a well-meaning liberal politician trying to fix a broken system from within, and in the final days before Mubarak stepped down, trying to find a safe exit for the ailing dictator. Badrawi is repeatedly stonewalled by the more sinister characters surrounding Mubarak, including his son Gamal Mubarak, and chief of staff, Zakariah Azmi.

Badrawi’s plan that he believed would allow Mubarak to step down gracefully – first by promising not to run in the forthcoming elections, and as the situation worsened, promising earlier elections – ultimately failed. Unlike the close circle around Mubarak, Badrawi saw the uprisings for what they truly were – the end to a regime.

The portrayal of Mubarak himself is an interesting combination of a family man, a grandfather, a war hero and a dictator. We are given a glimpse of his vulnerabilities and fears, as well as the conviction that he did nothing but serve his country as best he could. Hope recounts a conversation between Mubarak and Abdel Latif El Mennawy, the then head of Egypt’s state news:  “He was upset and told El-Menawy that he didn’t think that the protests were the appropriate reward for his nearly 30 years of service as president.”

A particularly interesting and unique perspective is seen through Mubarak’s personal makeup artist, Mohamed Ashoub, a man charged with making the president look younger and less haggard.  Through him, Hope presents an image, first, of a man with a healthy sense of humour, the late Muammar Qaddaffi often the punch line to his jokes, and later, a man mourning the sudden and tragic death of his grandson. After his grandson’s death, Ashoub describes Mubarak as “lonely and isolated.”

Hope’s short book is an invaluable addition to the plethora of books that have been published over the past year. It provides a short overview of the uprising, making it an ideal choice for anyone who hasn’t been paying attention and is looking for a crash course in the January 25 protests, as well as giving a brief glimpse into Mubarak’s rise to power. For those all too familiar with the ins and outs that took place in Egypt’s streets during the 18 day uprising, Hope turns his attention to a story that many will find fascinating – what was happening inside the palace walls as Mubarak’s regime crumbled around him.