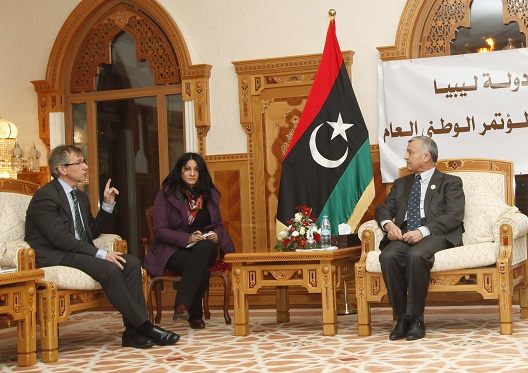 Since the ouster of Muammar Qaddafi in 2011, the United States and its allies have pressed the society he divided to engage in dialogue necessary for durable peace and national unity. Respected Libyans have tried to advance such efforts; however, instead of pursuing opportunities for mutual benefit, rival factions compete to control the country’s post-revolution narrative, believing they have more to gain politically and economically from conflict than cooperation. These groups rely heavily on legitimacy—be it revolutionary, democratic, or religious—to promote their versions of events, but none has the power or authority to impose its will. Along the fraying edges of Libya’s competing factions, illicit networks and extremist groups, including Islamic State affiliates, threaten domestic and international security.

With many external actors taking sides in the conflict, the United Nations is the only entity able to present a process that results in a peaceful, Libyan post-revolutionary narrative. On December 9, the UN Support Mission in Libya attempted to revive crisis talks in Ghadames aimed at a broader set of Libyan stakeholders, following September efforts in the same city, but had to postpone. When the UN announced renewed talks at an international meeting on Libya in Brussels, Special Envoys from the United States, the UK, France, and Italy reiterated their support for the internationally recognized government in Tobruk and all parties concluded that only sincere dialogue between competing factions could resolve the crisis. But less than a day after that meeting, Prime Minister Abdullah al-Thinni rejected UN efforts to broker a political settlement with those who do not recognize the legitimacy of the House of Representatives. Members of the rival General National Congress (GNC) in Tripoli also continue to resist inclusive dialogue.

UN Special Representative to the Secretary General Bernardino Leon has his work cut out for him. Amid polarized Libyan voices and weak substantive support from international partners, he must somehow convince both sides to join negotiations. If he ever hopes to succeed, the UN needs a focused strategy to persuade all sides to come to an agreement on Libya’s political roadmap by:

1)      bolstering the UN’s own institutional legitimacy in Libya;

2)      revising UNSMIL’s structure and approach; and

3)      harnessing the international community’s leverage for peaceful settlement, including through a peacekeeping force as required.

These three goals should be pursued in tandem as they are mutually reinforcing.

In August 2014, the UN Security Council published Resolution 2174, which among other things called for an immediate ceasefire between the diverse pro-Operation Dignity and pro-Operation Dawn blocs in a crisis that has been escalating since May. For a ceasefire to stick, all sides must compromise and someone must enforce the deal. This is not currently possible in Libya, where faction leaders match escalating violence with increasingly inflammatory rhetoric. Every mediation attempt that does not result in a ceasefire further erodes UNSMIL’s legitimacy among the Libyan people.

Instead, UNSMIL should first focus on incremental, public, achievable steps. For example, one goal of future talks could be to compel leadership from all sides to agree on broad, common principles to define a unified post-revolution narrative, which may include: national and territorial unity, commitment to non-violence, protection of civilians and critical infrastructure, the democratic aspirations of the revolution, respect for human rights, and transitional justice. The key aims of such an agreement would be to counteract competing definitions of legitimacy in the absence of a constitution, and potentially isolate some of the problematic spoilers in the negotiations who refuse to adhere to these principles. Confidence building measures like this would create negotiating space to establish a new political roadmap, including selecting a national unity government, establishing “rules of the road” for the crisis to which all sides could be held accountable, and perhaps lead to a durable ceasefire.

To help strengthen its legitimacy and improve crisis management, the UN should also immediately revise UNSMIL’s mandate, taking advantage of new language in UNSCR 2174 allowing for review before the March 2015 Security Council meetings, restructuring UNSMIL to focus on a more limited, arbitration role matched by adequate resources. The United States, UK, France, Germany, Italy, Spain and others have noted they consider the UN’s political dialogue efforts a top policy priority in Libya. But they also have pushed the UN to take on other ambitious tasks it cannot complete, setting it up for failure.

UN Special Representative to the Secretary General Bernardino Leon has actively pursued his mission in spite of his evacuation from Tripoli last summer and the deteriorating security environment. To end the crisis, the international community should pressure Libyans to accept a stronger arbitration role for the Leon. Libyan factions’ positions are too far apart for less forceful mediation to lead to a viable political roadmap. As an arbiter, Leon could approach a broader set of parties to the conflict, including powerful militias who constantly interfere in politics, offering himself as a neutral third party available to listen to their positions and provide a binding solution to the crisis. To ensure credible neutrality, his public posture should be that the main source of legitimacy today is an individual or group’s willingness to engage in UN-administered crisis arbitration for the sake of a peaceful future. Concurrently, the United States, UK, France, Italy, and other Western countries coordinating closely on Libya policy should press all interested external actors to adopt the same public posture. Leon must have the steadfast support of the entire international community, including those encouraging parallel crisis talks, such as Sudan. Otherwise factions will shop around among processes and choose the one in which they would have the most leverage.

Pressure from the International Community

The UN will remain unable to bolster its legitimacy or successfully arbitrate the crisis without intensified, unified international support that includes commitment to a peacekeeping force as required. Ambassadors should include Leon or his staff in engagements with Libyan authorities when a political settlement is on the agenda. The UN should also take the lead in all international meetings on political settlement, at every level, to coordinate a clear, unified message. In the joint statement after the December 3 meeting in Brussels, France, Germany, Italy, Spain and the United Kingdom, the US Secretary of State, and the High Representative of the EU warned of “additional measures to protect Libya’s unity, stability and prosperity, and to counter expanding terrorist threats to Libya and the region.” These threats need to be explicit and public to have an effect on factions’ positions. Scholars, including Frederic Wehrey and Wolfram Lacher, have already laid out many potentially effective tools the international community could use to force reluctant parties to the table: a UN freeze on factions’ sources of income, including assets in the central bank and National Oil Company; cutting off outside support by compelling international adherence to the September pledge of non-interference and a UN arms embargo; or new bilateral and/or multilateral sanctions against individual or group agitators. However, sustained, intense diplomatic engagement alone has not been enough to compel crisis resolution. A peacekeeping force, requested by a future national unity government, may be the only way to enforce some of these tools, to monitor implementation of a roadmap, or to protect any future unity government or ceasefire in the absence of a national army.

The UN peacekeeping option in Libya has been dismissed for years amid concerns about inflaming Libyan sensitivities about foreign interference. Limited UN funding, questions of participant make-up, and lengthy start-up timelines for new mission would also hinder deployment. But the consequences of a long-term security vacuum and instability in Libya present increasingly unacceptable global risks. If a peacekeeping or stabilization force is to be justified as worth the costs, interested international partners should scrutinize urgently faster mechanisms for deploying a force, whether by finding ways to speed up UN preparations, exploring NATO options, or developing a new EU force, as Dirk Vandewalle suggested. A mechanism should be implemented if it poses low risk of accelerating the conflict and is acceptable to Libyan parties to crisis talks.

In the end, support from the Libyan people themselves is the UN’s most valuable asset. Libyans throughout the country have grown weary of political infighting, instability, and the decline in standard of living they have experienced since the revolution. Their desire for peace has been demonstrated time after time since the revolution in their brave confrontations with militias and extremists. Through building its legitimacy, using more forceful negotiating tactics, and harnessing credible international enforcement mechanisms, the UN could rally the public and provide protection for them as they try to hold militias and politicians accountable to a political roadmap that revives the peaceful post-revolution narrative for which Libyans have sacrificed so much.

Lydia Sizer is a consultant on North African affairs based in the UAE. She previously served as a Libya Desk Officer at the U.S. Department of State from 2012-2014.