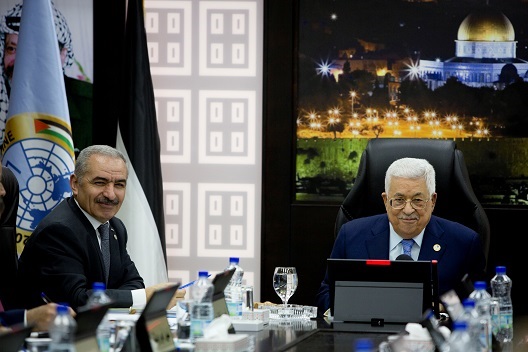 The appointment of Mohammed Shtayyeh as head of a new Palestinian government on March 10 constitutes an overt attempt to consolidate Fatah’s dominance in the Palestinian political arena and, in the process, delegitimize rival party Hamas. Shtayyeh’s installation as prime minister, however, does not just further complicate reconciliation attempts between the two feuding political parties. Heightened tensions with Israel’s overtly right-wing government and economic hardship in the West Bank mean that Shtayyeh faces an almost impossible task.

President Mahmoud Abbas’ decision to dissolve the unity government led by Rami Hamdallah in January of this year offered a staunch message to Hamas. As political independents, Hamdallah and his predecessor, Salam Fayyad, were meant to bring progress to reconciliation efforts between Fatah in Ramallah and Hamas, the Islamist group that has been ruling the Gaza Strip since it took control of the strip in 2006. The most recent reconciliation attempt, brokered by Egypt, occurred in 2017, when the factions agreed that the Palestinian Authority would resume governing in Gaza. Disputes over power-sharing and an assassination attempt on Hamdallah during a visit to the enclave in 2018 hampered the implementation of the agreement. The potential for a resolution now stands to become ever more complicated. Unlike his technocratic predecessors, Shtayyeh does not profess political neutrality; instead, Shtayyeh is a top official in Abbas’ Fatah movement and, similarly to the president, a strong critic of Hamas.

In replacing the previous government, Abbas not only seeks to challenge Hamas’ legitimacy, but equally aims to enhance Fatah’s political control, sparking new tensions between the rival factions. The dissolution of the unity government, which has been in place since 2014 with the tacit backing of Hamas, thus was recommended by Fatah’s Central Committee. Fatah also proposed that the new government be made up of representatives of various Palestine Liberation Organization factions (PLO), an umbrella political organization that is dominated by Fatah and, since 2004, has been chaired by Abbas. According to reports, Hamas, which is not a member of the PLO, was not invited to take part in the new government. Abbas’ decision to form a new government has not been taken lightly by Hamas; the group has described the move as a “power grab” by Fatah and, in the words of Hamas spokesman, Hazem Qassem, a “severe blow to efforts to achieve Palestinian national unity.”

In his new role Shtayyeh will also need to confront an increasingly emboldened right-wing Israel—one that enjoys the seemingly unconditional support from the Trump administration. Reflecting this political reality, Abbas’ seven-point letter of assignment called on Shtayyeh to prioritize Palestinian steadfastness, defending Jerusalem, and supporting the victims of the Israeli occupation. A staunch believer in the two-state solution, Shtayyeh has reiterated the Palestinian Authority’s (PA) commitment to the creation of a Palestinian state alongside an Israeli state, with occupied East Jerusalem as its capital. Amidst Israeli threats to annex the West Bank, including by re-elected Prime Minister Benjamin Netanyahu, and a lack of progress on the peace front, Shtayyeh has pledged to review the PA’s legal, security, and economic relationship with Israel.

Shtayyeh’s promise to reevaluate the PA’s cooperation with Israel comes in the wake of ongoing tensions over the Israeli government’s withholding of Palestinian tax revenues. Under the 1994 Paris Protocol, which established a customs union between Israel and the Palestinian Authority, Israel is supposed to collect value-added tax, import duties and other taxes on the PA’s behalf and hand them over on a monthly basis prior to the creation of an economically-independent Palestinian state. About 7 percent of the approximately $166 million dollars that is transferred each month is handed over by the PA to Palestinians held in Israeli prisons and to the families of Palestinians killed by Israeli troops—clear support for terrorism in the eyes of the Israelis. In mid-February, under pressure from the upcoming elections and his right-wing government, Netanyahu moved to ratify a law to withhold tax revenues equivalent to the sum given to prisoners and their families in the previous year. Abbas, in response, announced that he would refuse all tax revenue if a part were withheld.

The PA’s ongoing defiance has major financial repercussions for the Palestinian public sector and the West Bank economic and political security. The World Bank estimated in a report published last month that transfers from Israel constitute two thirds of PA revenues and 15 percent of Palestinian GDP. Without its key source of revenue, Abbas ordered 40 percent wage cuts to Palestinian civil servants and cut aid to the poor in order to continue payments to prisoners in early March. The PA’s coffers were already suffering from a deficit as a result of sluggish GDP growth and President Trump’s decision to slash half a billion dollars in aid to the authority and Palestinian refugees in 2018. Last week, a UN report warned that the fiscal crisis threatens the stability of the West Bank and Palestinian state-building efforts.

While Shtayyeh has proposed a number of economic measures to reduce Palestinian reliance on Israel through the development of Palestinian agricultural and economic sectors, Israeli-installed restrictions on construction, agriculture and movement in the West Bank mean that the intricate system of economic dependence will be difficult to replace in the short term. Shtayyeh’s plan to rely on financial backing from Arab donors also appears ill-conceived. In late April, the Arab League pledged to provide the PA with $100 million dollars each month. So far, however, this promise has not materialized.

According to a report by Israel’s Public Broadcasting Network, prior to the April 9 elections, Israel secretly transferred $182 million dollars into Palestinian banks to prevent an economic crisis. The PA, however, rejected the money and returned it. Israeli Finance Minister Moshe Kahlon, who enjoyed a good relationship with Hamdallah, can also not bank on leveraging his relationship with Shtayyeh to force the PA into accepting incomplete tax revenues. Upon assuming office, Shtayyeh called for resistance in the face of Israel’s “financial war,” as any flexibility from the PA on this matter, according to the prime minister, would allow Israel to use tax deductions as a weapon in the future.

Facing a potential collapse of the PA, Israel will need to reconsider its policy. In the lead-up to the publication of the Trump administration’s peace plan, concerns exist that widespread violence may break out in the Palestinian Territories. The 30,000 security personnel entrusted with maintaining stability and calm in the West Bank in coordination with their Israeli counterparts are among those who have seen their salaries slashed; a short-term election gain, as a result, may have longer term consequences.

Grace Wermenbol specializes in the contemporary geopolitics of the broad Middle East and North Africa (MENA) region. She previously served as a lecturer on the Israeli-Palestinian conflict at the University of Oxford and held a research position at Oxford’s Department of Politics and International Relations. She holds a Masters and PhD from the University of Oxford, where her research focused on the Israeli-Palestinian conflict.