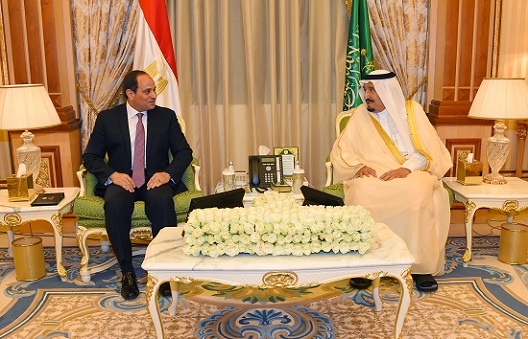 This past Sunday, Egyptian president Abdel Fattah el-Sisi visited Riyadh for an official state visit to the Saudi Kingdom. It comes at a time when many are speculating about the future and current state of Saudi-Egyptian relations, particularly after the furor about the status of the islands off the coast of Sinai. But much of the speculation may be focusing on not quite the most pertinent of things.

The most important thing to keep in mind about Riyadh’s stance towards Egypt is that undying cliché: Egypt is too big to fail. Egyptians number around one hundred million people; in other words, around one out of every four Arabs is Egyptian. There will be debates around the present political and cultural impact that Egypt has in 2017 in the region and worldwide, but irrespective of such a discussion, the overriding concern of Riyadh, as well as much of the GCC if not the region is keeping Egypt from failing. Few are willing to risk having an Egypt that looks like a Syria, or a Libya. When Saudi and Gulf leaders more generally speak about ‘Egypt is too big to fail,’ they mean it.

The irony, nevertheless, is that while the idea of Eygpt’s ‘failure’ is truly catastrophic to envisage, is not particularly likely. There were some analysts and commentators in 2013 and 2014 who speculated that the ‘Algerian scenario’ could come to pass in Egypt. That was harkening back to another Arab country that saw the political process end as the result of a military intervention, against an Islamist movement that gained a plurality of support in the country. Algeria suffered a disastrous civil war as a consequence of the resultant turmoil—and the idea was posited by some that this was en route in Egypt.

Cairo, nevertheless, knows that its destabilization is a pertinent fear for the GCC, and the world more generally. Frankly, it is an appropriate concern to have—because between thriving and complete state breakdown, there are many different possibilities that could emerge. Riyadh is fully aware of that, and employs a rationale that seeks to avoid that. It provides support, in the form of aid, investment, energy support, and political support, without a sense of ‘conditionality’—unlike, for example, the European Union or the IMF.

There are two provisos, however, to account for when considering the model of Saudi largesse that was the case until recently. The first is the matter of the two islands in the Straits of Tiran, Sanafir and Tiran. It has been postulated that this was a ‘condition’ of continued support from Riyadh, which had always considered the islands to have been Saudi, but under ‘Egyptian protection’ for some decades.

There is obviously a discussion to be had as to whether or not the islands are legally Saudi or Egyptian, but that is immaterial here. What is germane, however, is that Riyadh wanted the islands, and Saudi officials thought they had been given a firm commitment by Cairo to get them. When the Egyptian judiciary threw a spanner into the works, following a public outcry from the Egyptian public against the transfer of the islands, it went down badly in Riyadh. It was less an issue of getting the islands, and more an issue of the perception that Cairo had reneged on the deal. Had Cairo not given assurances that the transfer would happen, it is entirely plausible the relationship would have continued without much of a bump. But the commitment to transfer, followed by the failure to follow through, meant that, from Riyadh’s perspective, there was a sense that a promise had not been kept. In recent weeks, various movements by the Egyptian executive vis-à-vis the judiciary may have given Riyadh the impression that the promise may be eventually fulfilled—and even if that is in the medium to the long term, it seems that gesture will suffice.

(Photo released by the Egyptian government.)

But the Cairo-Riyadh relationship goes far beyond the issue of the islands. The backdrop of the Saudis’ main issues in the region relates to two main issues: the Iranian question, and the threat of the Islamic State (ISIS, ISIL, or Daesh).

There is certainly frustration in Riyadh about Cairo’s stance on Syria, where Cairo is deemed to have been far more supportive of the Russian position on Bashar al-Assad than Saudi’s stance. Riyadh would have also wanted more support from Cairo in terms of its campaign in the Yemen, which thus far has been met with a great deal of resistance among Cairo’s political and military elites. However, Riyadh sees Cairo as being on the ‘right side’ of the Sunni Arab/Iranian Shia divide. It is the largest Arab country, after all, and very much a Sunni country. Saudi’s priority is to push back against Iranian designs on the Arab world, and it cannot do without Cairo in that geo-political dispute.

Riyadh views the growth of ISIS to be another threat, even though Saudi has a complicated relationship with ISIS in terms of the ideological sources of group’s radical ideology. In that regard, Cairo is, again, on the right side: it opposes ISIS to the hilt.

Indeed, Cairo opposes a variety of types of Islamism—including types that Riyadh is pragmatic about, including the Muslim Brotherhood. It should not be forgotten that in its moves in Yemen and Syria, Riyadh is content to engage with Brotherhood elements. But, again, this difference of opinion with Cairo is a minor alignment issue. It is not a relationship breaker—nor indeed, even a particularly significant strain on the relationship.

Cairo thus rests easy—but it should not, which leads to the second proviso in discussing ‘conditions’ on the economic relationship between Saudi and Egypt. In very real terms, the economic and demographic challenges in Saudi preclude the possibility of sending huge amounts of aid to Egypt. Perhaps more so than in any other GCC country, those challenges mean that over the medium to the long term, Saudi simply cannot afford to imagine that it can underwrite Egypt’s economic woes. That does not mean a shift on conditionality in terms of directly encouraging reforms that Riyadh would like to see to make Egypt more stable in the medium to long term, but instead shifting more to investments.

It may be that when other crisis situations end, the Saudis, and the GCC in general, gathers momentum on encouraging reform more strategically in Egypt. But even that medium to long term change would appear to be dubious: Saudi has not engendered that sort of reform anywhere else, and it prioritizes short-term stability over all else. In that regard, Saudi is not particularly different from most Western states, the United States and European Union member states included. This, too, is something that Cairo is acutely aware of—and thus, the relationship between Riyadh and Cairo remains relatively stable.