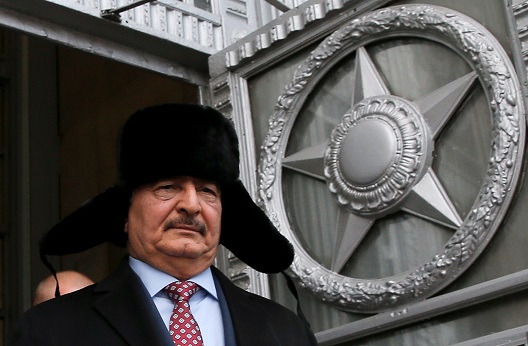 On February 17th, Libyans will celebrate the anniversary of a revolt that ultimately toppled and killed Muammar Qaddafi, ending his forty-two-year oppressive rule. This anniversary and others in the region are regrettable reminders of how the expectations in the immediate aftermath of the Arab Spring compare to the reality on the ground seven years later. Many countries that sought to depose a tyrannical leader now find themselves in worse circumstances. Libya and Syria in particular have faced extreme violence since 2011. In both states, the political and security vacuums from internal fractures allowed the Islamic State (ISIS, ISIL, Daesh) to rise and thrive. In Syria, this same vacuum allowed Russia to gain military influence and involvement in the conflict. Russia is likely to use current unstable conditions in Libya today for its own interests, much as it has done in Syria, beginning over two years ago.

The inability of the US to engage effectively in Syria widened the power vacuum in the country, creating an environment ripe for Russian influence. Two main factors resulted in low US involvement in Syria: weak domestic support and the influence of the Iranian nuclear deal. Due to the exhausting wars in Iraq and Afghanistan, lack of domestic support for American involvement in another Middle Eastern conflict is understandable. According to a 2014 Chicago Council survey, seven in ten Americans felt the two wars, spanning the previous decade, were not worth the cost. The fatigue from Iraq and Afghanistan likely influenced the public’s sentiment on the Syrian war. Only seventeen percent of respondents of the survey supported sending troops to Syria.

Additionally, the influence of the ongoing and historic Iranian nuclear deal on US foreign policy in Syria reflected the priorities of the Obama administration. The Obama administration did not want to irritate Iran and risk spoiling the delicate and complex deal. Therefore, the White House was reluctant to get involved in Syria (even to the extent of protecting Syrian civilians from mass homicide) where Iranian proxies were abundant. To avoid US engagement in Syria, involvement was limited, leaving room for Russia to find leverage (especially after the 2013 “red line” debacle). The same reluctance of American intervention exists in Libya.

After the 2011 NATO intervention in Libya and the removal of Qaddafi, US involvement has been limited to air strikes on ISIS targets. In fact, the abandonment of Libya by the international community is seen as one of the critical mistakes that contributed to the unraveling political and security crisis. The US and Europe supported UN-led diplomatic negotiations from the beginning, but no country has made Libya a top priority. The lack of urgency in Western capitals to solve the Libyan crisis paved the way for Moscow to throw its weight behind strongman Khalifa Haftar, who controls the eastern half of the country with his self-declared Libyan National Army (LNA).

Russia took advantage of Western disengagement in Syria and used the pretext of counterterrorism as an impetus for involvement in Syria. The first Russian air strikes in late 2015 were in the name of counterterrorism. However, the majority of air strikes targeted rebel-held areas and eighty percent did not hit ISIS-controlled territory. Although the Kremlin announced that air strikes were to help the Syrian regime fight ISIS, instead Russia bolstered the regime against opposition attacks. Counterterrorism offered a guise for Russia to support Assad and to pursue a military presence in the Middle East in general. The same pretext exists in Libya today.

The presence of ISIS and other extremist groups gives Russia an opportunity to support military leader Khalifa Haftar in the name of defeating extremists. Indeed, ISIS is not as strong in Libya now as it was in Syria in 2015. However, there is no shortage of extremist activity in Libya.

ISIS conducted multiple sophisticated attacks in the second half of 2017. Benghazi, previously regarded as one of the safest cities in Libya, saw two separate attacks killing a total of thirty-seven and wounding 135 people over the past few weeks. Last year’s attack on a concert in London was linked to an ISIS cell in Libya, demonstrating how Libya’s instability affects other countries. The multiple terrorist organizations in Libya, including ISIS, could easily serve as a pretext for Russian backing of Haftar, who superficially resembles Assad in his military campaign of defeating terrorism as well as his authoritarian practices in doing so. The continued attacks in Haftar’s territory bolster his narrative to undertake strong man approaches, which Russia can get behind without too much upset from Libyans who suffer from regular attacks.

Objectively, the US and Russia would seem to have a shared interest of eradicating terrorism and an understanding that doing so requires military force. Yet Russia’s publicized impetus for involvement in Syria was a stark falsehood. The Kremlin’s actual interest in Syria is to anchor its influence in the region and to prop up an authoritarian regime. Its strategy may extend to Libya.

Russia’s interests in Libya are varied. On the economic side, Libya’s vast oil reserves generate enormous wealth. Regaining any portion of the billions of dollars of contracts—some signed as recently as 2008—Russia had in Libya under Qaddafi is enticing. Reconstruction efforts could also be highly profitable, and Russia may have interest in participating, provided someone else pays the bills. In terms of the foreign policy chessboard, Libya’s placement along Europe’s southern border gives Russia the opportunity to create trouble a few hundred miles south.

Russia has begun inching toward Libya recently by cozying up to neighboring Egypt. In March 2017, Russia quietly deployed troops to Egypt; then in November, the two countries signed a draft agreement for Russia to use Egypt’s airspace and military bases, including one on the Mediterranean coast only fifty miles from Libya. Egyptian and Russian officials met this week in Cairo to discuss cooperation on security efforts in Egypt. Direct flights between Russia and Egypt are resuming after a two-year hiatus and military ties between the two countries are growing.

Egypt’s long-time support of Haftar aides Russia’s initiative in Libya. Cairo often provides air support to Haftar against his enemies in eastern Libya. Over the past year, Egypt has tried to position itself as a mediator to integrate various factions into a united Libyan army by facilitating discussions in Cairo. Egypt’s long western border hems the eastern border of Haftar’s stronghold in Libya. Egypt provides a trustworthy, nearby location from which Russia can run its base operations while Egypt benefits from Russian support and weapons. Russia has already taken advantage of Egypt’s proximity and shared economic, strategic, and security interests in Libya. The Russian-Egyptian friendship bolsters each side’s goals in the region, among which is to side with Haftar. Russia’s involvement is growing. With Egyptian help, Russia could impact the outcome of the Libyan crisis, as it did in Syria.

Yet Moscow’s actions in Egypt do not align with its rhetoric regarding the Libyan crisis. Russia publicly supported the UN-led political solution that was established in 2011 to help Libya in its governmental transition and post-conflict problems. Moscow also hosted Haftar as well as members of the rival UN-backed government for bilateral meetings to maintain a narrative of neutrality. Nevertheless, Russia has presumed a bias against its ally Haftar within the UN-led process. Although on the surface Russia seems to be supporting the UN solution, it is important to acknowledge the similarities to the Syrian conflict. Putin himself said “there is no other solution than a political one” in Syria. Nevertheless, Moscow intervened militarily and changed the trajectory of that war. Therefore, because Moscow supported a diplomatic solution in Syria yet conducted a military intervention, Moscow’s rhetoric favoring international mediation is not to be taken at face value in the Libyan theater either.

There are stark differences in the Syrian and Libyan conflicts that may account for a deviation of Russia’s intentions in each theater. The weakness of all actors in Libya as well as variabilities in US foreign policy may change Russia’s plan. In Syria, the battle was complex and highly dynamic with territorial control wrestled back and forth between Assad and the opposition. No clear winner emerged.

In Libya, on the other hand, there exist no actors strong enough to incubate the same degree of oscillation. The situation on the ground in Libya is stalled and the strongest actor, General Haftar, is too weak to control the country alone. On the one hand, given the unwieldy situation, involvement in Libya may be costly for Russia. Russia’s economy is not booming at the moment and supporting Haftar’s army would be a substantial investment. On the other hand, the fact that no actors in Libya present an equal threat to Haftar may in fact augment the appeal to Russia. Additionally, due to its small population, the price of influence in Libya is smaller than in Syria. Finally, if the Syrian conflict winds down in favor of Russia’s ally Bashar al Assad, the Kremlin will have a newly expanded capacity to focus elsewhere.

Another set of dynamic differences affects the Libyan theater. The void the Obama administration created in Syria due to a hyper-focus on the Iranian nuclear deal and the low domestic support for intervention in the Middle East benefited Russian interests. Unlike in Syria, there is no nuclear deal to consider while working with militias on the ground in Libya. Therefore, the current White House must balance fewer conflicting foreign policy agendas in Libya.

Low support for US involvement in the Middle East could affect the Libyan conflict in the same way it affected it in Syria. Domestic support for intervention remains at similar low levels as in 2014. A recent Chicago Council survey in 2017 found only twenty percent of respondents agreed with increasing US presence in the Middle East. The American population, and likely the world, would find US ground or maritime presence unpopular. Therefore, Russia can anticipate some US reluctance for involvement in Libya. However, whether the reluctance will match that of the Syrian conflict remains unknown.

At this time, the situation in Libya is not a priority for the US administration. Nevertheless, due to the political stalemate, conditions on the ground can change any day. Libya’s proximity to America’s greatest allies may demand more attention if the situation takes a turn for the worse. If the US exhibits the same reluctance for involvement that it did in Syria, Russia will have the opportunity to increase its efforts to meddle effectively in Libya. Western powers severely underestimated Russia’s willingness to support Syrian president Bashar al Assad and the geopolitical consequences of doing so. Given similar favorable conditions in Libya, Russia’s opportunistic style of foreign policy, and Russia’s success in saving the Assad regime, it would be a flawed assumption that the Kremlin will stop in Syria. The current US administration says it is disinclined to repeat the same policy mistakes made by its predecessor in Syria or elsewhere.