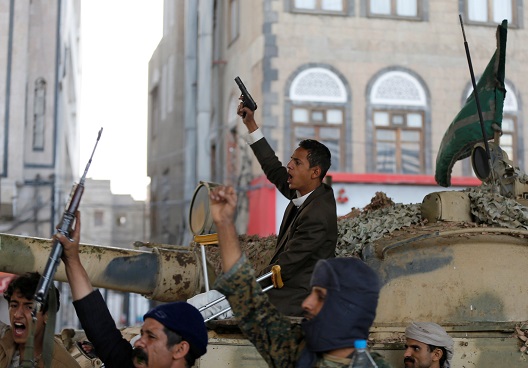 Earlier today, videos showing armed fighters carrying former Yemeni president Ali Abdullah Saleh’s body surfaced online and shocked the region. The General People’s Congress (GPC) confirmed that Saleh and Assistant Secretary General to the party Yasser al-Awadi were killed in a Houthi attack on one of his compounds. This turn of events holds tremendous implications for Yemen’s future and the course of the ongoing conflict that has claimed thousands of lives and led to what the United Nations has called the world’s worst humanitarian crisis.

Saleh leaves a complicated legacy. As the only president who ruled over a unified Yemen, his governing style was often characterized by corruption, mismanagement, and factionalism. He reportedly amassed billions in wealth as he pitted his political competitors against each other. He oversaw a low intensity war against the Houthis, fighting an insurrection—sparked by the killing of Hussein Badreddin al-Houthi, a grandfather of the Houthi movement—that ran from 2004 until the Yemen revolution in 2011. During the Arab Spring uprisings, Yemen’s youthful demonstrators succeeded in ousting Saleh from his more than 30-year reign. The Gulf Cooperation Council (GCC) stepped in to moderate the agreement that saw Saleh’s then-deputy Abdrabbo Mansour Hadi installed as Yemen’s new transitional leader in 2012. Hadi oversaw the National Dialogue Conference that should have vaulted the country into a progressive future, but Hadi’s rush to complete the dialogue process against southern Yemeni and Houthi interests provided Saleh with the opportunity for a political resurgence.

Saleh decided to align his still-loyal forces behind the Houthi insurgency in September 2014, and proceeded to push Hadi’s government out of the capital Sana’a and into Aden. In 2015, Saudi Arabia began leading the international military intervention, ostensibly to reinstate Hadi as the legitimate ruler, but which most analysts saw as a means of countering Iranian influence by keeping the Houthis from seizing control. Saleh used his alliance as a bargaining chip to regain significant influence over the powerbrokers in the Yemen conflict, both local and international, but cracks in the alliance emerged intermittently. Nonetheless, the alliance held until Saleh decided to make his move.

In an announcement on December 2, Saleh suddenly broke with the Houthis and shifted toward the Saudi-led Arab Coalition, calling for political negotiations between the warring parties. (Ironically and characteristic of his political survival strategy, only days earlier he had called for increased Iranian involvement in the conflict.) The announcement confirmed the Houthis’ mistrust of Saleh and sparked urban clashes in Sana’a that culminated in today’s attack, killing the master manipulator of Yemen’s political and military scene, ending a defining era in Yemen’s history, and throwing the country into further uncertainty. Saleh might have actually succeeded in a political comeback, but a slight miscalculation put him in the wrong place at that the wrong time.

Saleh’s death leaves many questions unanswered and introduces new ones. The immediate implication of his death begs the question of how Yemenis will manage the resulting power vacuum. While it seems quixotic to wonder about a vacuum left by an already ousted leader, it speaks to Saleh’s political prowess that this point remains highly relevant in the country’s conflict. The two closest implications will be most acutely felt within GPC’s camp and between the Houthis and Saleh-loyal forces.

Within the GPC, Saleh had already begun grooming his son Ahmed Saleh to assume some degree of political control. Saleh and his supporters had been pushing his son’s candidacy for the future presidency of Yemen since before the current civil war. Unconfirmed reports suggest that the United Arab Emirates have already endorsed Ahmed Saleh as his father’s heir and successor, but it remains unclear if the GPC will acquiesce to him leading the party given the volatility in Saleh’s political network in the wake of his death. His forces’ allegiance also comes into question as commanders will likely compete for control and some may even choose to maintain the Houthi alliance rather than fight it. It will take some time for the dust to settle on these two pertinent questions. The Houthis themselves have already hailed Saleh’s death, with rebel leader Abdel Malik al-Houthi condemning his duplicity on Yemeni radio and television. Yet it remains unclear if they would even accept working with Saleh-aligned units going forward.

At the regional level, questions over the trajectory of the war and the Gulf states’ military intervention come into focus. Had Saleh’s military and diplomatic coordination with the Saudi-led Coalition succeeded, he would have provided Saudi Arabia and the UAE with a relatively graceful exit from the conflict. Saleh’s death, coming just before the start of the GCC Summit in Kuwait, undoubtedly leaves the Gulf countries scratching their heads. (Until the time of this writing, no official statements have yet been released.) In the wake of his death, finding a resolution without an inside man will become more difficult. The Houthis have shown that they would fight to the last Yemeni, their hardheadedness and implacability second only to their resolve. Without Saleh to stoke an internal insurrection against the Houthis, Yemeni leaders amenable to both Saudi Arabia and the UAE are in short supply, if they exist at all. Ali al-Ahmar, Saleh’s former defense minister, would be the most obvious choice, but his ties to Islamists and al-Qaeda unnerve the UAE in particular—not to mention the United States.

Which brings us to the question of how the Trump administration might respond to this latest source of instability. Given the “America First” policy, the United States is unlikely to change course; its interest will remain defeating terrorism in Yemen militarily without addressing any of the underlying causes. The most cynical view would see the Trump administration focused purely on US economic gain, as the renewed instability might keep the Gulf engaged in an unending conflict and keep them shopping for US arms. A less cynical view would see the US administration as punting the problem back to Saudi Arabia and the UAE, providing what diplomatic assistance they might request. However, the current US administration has not flexed much diplomatic muscle in the past year, and with rumors that the Secretary of State Rex Tillerson might soon be out of his position, the administration will likely be focused on replacing Tillerson and getting the State Department in order.

Saleh’s passing throws yet another wrench in an already complex and brutal conflict. If there is any silver lining at all, it is that the division and polarization that Ali Abdullah Saleh sowed and upon which he fed to enrich himself and his family might now dissipate, leaving a better chance at an eventual resolution than with him pulling the strings. Sadly, the volatility he leaves behind suggest that this eventuality will have to wait years, maybe decades, as Yemen spirals deeper into the status of failed state.

Image: Houthi militants react as they gather next to a tank after the death of Yemen's former president Ali Abdullah Saleh, in Sanaa, Yemen December 4, 2017. REUTERS/Khaled Abdullah