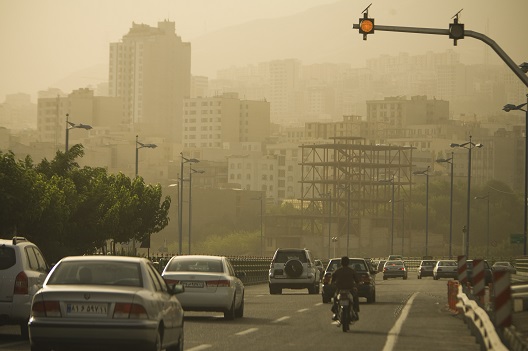 Emblazoned across the jerseys of Iran’s 2014 World Cup soccer team is a symbol of national pride: the endangered Asiatic cheetah. Iranian conservationists have worked for years to reverse the cat’s dwindling population, and sadly their critical efforts are hampered by forces both in and outside of Iran. The world celebrated Earth Day on April 22, 2019 with its theme Protect Our Species; a reminder of the devastating impacts of climate change for species unable to adapt. Iran’s climate change struggles are nothing new. Eager to develop infrastructure and technology as a way of catalyzing immediate economic benefits, the government paid little attention to long-term environmental impacts. Domestically, the Iranian government is failing to tackle this challenge and instead persecutes environmental conservations, which serves to further damage the environmental movement. On an international scale, additional US sanctions also continue to hamper Iranian efforts to combat current and future effects of climate change.

Iran needs a portfolio of solutions to approach climate change—one grounded in a re-evaluation of its resource management practices, and bolstered by international assistance. Until both domestic and international policies are overhauled, the fate of Iran’s changing climate and its people, looks grim.

Since the 1990s, Iran has suffered from extreme droughts and dwindling water supplies. Iran’s socio-economic drought, compounded by resource mismanagement, inefficient governance structures, and a number of competing stakeholders and interests, set the stage for widespread corruption. And although Iran now categorizes climate change as a national security issue, there is still a long way to go towards holistic understanding of the issue as the arrests of 63 conservationists in 2018 indicate.

Iran’s reliance on groundwater has led to critically low water tables, drying lakes and river, and degraded water quality. Desertification causes massive dust storms that engulf cities and impact air quality. In the eastern part of the country, the Sistan region experiences annual dust storms, known as the wind of 120 days that some reports show blow far past Iran’s borders and can reach even US soldiers stationed across the Afghan border. Extreme heat waves hit Iran’s poor the hardest, forcing many to work in dangerous temperatures or face lost wages. In 2017, Ahvaz reached a record 129 degrees Fahrenheit—rivaling the all-time world record temperature of 134-degrees, documented in California’s Death Valley in 1913. The country’s air quality has for years worsened due to US sanctions which forced the government to produce low grade fuel with pollutants. To supply gasoline to its 26.3 million cars, Iran converted its petrochemical factories into refineries, an expensive and inefficient process, in order to produce its own petrol without the benefit of importing higher quality additives needed for cleaner fuel. Added pollutants from the refineries have contributed to rising rates of asthma, lung cancer, and strokes.

The Iranian government has at times recognized the threat climate change poses. Ahead of the 2015 Paris Climate Conference (COP21), and just as the JCPOA came to fruition, Iran’s Supreme Leader emphasized that Iran must manage “climate change and environment threats such as desertification, especially dust pollution, [and] drought.” At COP21, Iran committed to reducing its emissions by 12 percent, devoting $5 billion to conversation efforts, and cutting its greenhouse gas emissions by 4 percent—as long as sanctions were not re-imposed.

Sanctions alleviation gave Iran a head start on meeting its mitigation targets. Eased financial restrictions catalyzed a flurry of interest abroad to invest in Iran’s water sector, and to tap into Iran’s solar and wind power potential, which could meet half its domestic energy needs. However, as soon as US sanctions went back in place, the same firms eager to invest quickly backtracked. UK renewable energy firm Quercus abandoned a $570 million plan to construct a solar power plant, while companies like Siemens said they would not consider any new deals with Iran.

Most telling is that front and center on the World Bank’s Iran page is a disclaimer that the bank “has not approved any new lending to Iran since 2005” and that it remains fully compliant with sanctions. An audit evaluating the World Bank’s plan to assist Iran in water management practices notes at least six unsatisfactory project outcomes attributed to sanctions-related restrictions, including procurement disruptions and impediments to using intermediary banks to disburse funds.

Weaponizing Iran’s Climate Struggles
The UN’s Intergovernmental Panel on Climate Change (IPCC) emphasizes that securing human rights is contingent on addressing climate change. In 2014, the body noted that climate change “threatens the full and effective enjoyment of human rights by people” and has specifically noted how climate change weakens Iran’s food security as agricultural production drops, and farmers turn to alternative sources of income, like drug smuggling, to make ends meet. But the IPCC underscored that there are “adaptation and mitigation strategies” to reduce these impacts and secure a sustainable future—strategies not readily available to Iran.

Iran sanction hawks advocating for “building a wall of sanctions” in response to, among other issues, Iran’s abysmal human rights record works at cross purposes. To support the Iranian people means empowering those dedicated to stewarding Iran’s resources—not weaponizing access to food, land, and water.

The US-Iran policy community continues to grapple with what comes next with Iran, and remains embroiled in discussions around the possibility of war with Iran, the fate of the JCPOA, and the escalatory nature of US President Donald Trump’s disruptive and inconsistent policies. But climate change provides a rare chance for a positive sum engagement that can yield positive benefits, not only for Iran and the US, but also for an interconnected world increasingly united by a need to preserve our planet.

If the US Government wants to support the Iranian people, then it must abrogate policies that prevent Iran from harnessing international development assistance, and instead make exceptions for this type of aid as it does for those of a humanitarian nature. The current administration likely has little political will to do so in light of its own withdrawal from the Paris climate accords, and its hawkish attitude towards Iran in general. Future administrations would do well to realize that preventing Iran from accessing international assistance only accelerates the destructive forces of climate change in the region and around the world.

Mana Mostatabi is the Communications Director at the National Iranian American Council (NIAC). She graduated from Georgetown University in 2017 with a Masters of Science in Foreign Service. You can follow her on Twitter @mostlymana.

Image: Photo: Motorists travel on a highway in Tehran as the city is covered in dust July 6, 2009. The government closed private educational centres, state offices, industrial units and military bases for two days and raised its pollution alert status due to the dust, which an official from Tehran's environment office attributed the source to dust from dried marshland in Iraq blown towards Iran, according to the Iranian Mahr News Agency on Monday. REUTERS/Morteza Nikoubazl