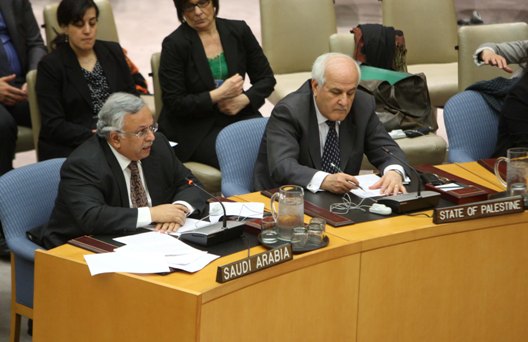 As the Hajj holiday wound down in Riyadh, the Saudi foreign ministry released a surprise statement Friday rejecting the Kingdom’s election to a two-year non-permanent position on the UN Security Council (UNSC). The Saudi statement catalogued a variety of factors behind the decision: lack of progress on the Israel/Palestine issue, failure to rid the region of nuclear weapons, and failure to apply “deterrent sanctions” against Syria. The statement also complained that the “manner, mechanisms, and double standards” in the UNSC prevent it from acting effectively. But somehow it doesn’t add up.

Seats on the Security Council are not a prize or gift bestowed by the UN Secretary-General or decided by the five permanent members. Saudi Arabia’s election to the post was a result of an active campaign by the Saudis over the last year in which they expended considerable political capital, and likely some financial resources, to be selected without opposition from others in their regional UN grouping. The Saudis were founding members of the United Nations and had never before served on the Security Council. Even as the Foreign Ministry in Riyadh released its statement rejecting the seat, the Saudi Mission’s UN Mission website had not caught up and was still in congratulatory mode, carrying the Saudi UN Ambassador’s remarks calling the election “a defining moment in the Kingdom’s history” and “much to rejoice over.”

It has been obvious that the Saudis have not been happy with UNSC inaction against Syria, recently showing their pique by foregoing the traditional national address to the UN General Assembly. But the world did not stop when there was no Saudi speech in New York, and boycotting Security Council membership, especially after assiduously seeking the post, is highly unlikely to advance Saudi foreign policy goals. It will not somehow deeply shame the Russians and Chinese into reversing their resistance to Security Council action against Syria. It will not push US policymakers toward a firmer stand against Iran or more pressure on Israel to reach a comprehensive peace with the Palestinians. Nor will this strange gesture miraculously spur a period of deep reflection among permanent members on how they now must come to grips with reform of the UNSC. The cosmopolitan yet also insular world of the United Nations, with its own tribal customs, simply does not reward or encourage self-examination. Thumbing one’s national nose at those customs does not build influence, and members will quickly forget the diplomatic outburst unless it heralds a new (but unlikely) concerted strategy of public engagement and defense of Saudi positions.

A place on the Security Council would have provided the Kingdom with a visible platform to continue to press its objectives. Perhaps, at the crucial moment, that was part of the problem. Day-in day-out engagement on the UNSC would expose the Saudis to making choices and casting votes on highly controversial matters. Behind the posturing contained in the Saudi statement could lie a fear of being forced to differ publicly with major powers on a variety of questions, without much positive result. Given their overall conservative approach and general allergy to public discussion of controversial issues, the Saudi leadership may have decided at the last minute that they just did not need the aggravation.

Although it might play well for a couple of days in the Arab world, declining the seat demonstrates ineffective public diplomacy at a time when the Saudis need to focus on how to better tell their story and defend their interests in the public arena. The deep-seated Saudi preference for elite-elite secret diplomacy is not sufficient if they really wish to play a broader role on the international stage. The well-developed links with senior policymakers in the West need to be accompanied by efforts to engage publics outside the Arab world who know little or nothing about the Kingdom. Enormous change is taking place under the surface in Saudi Arabia but it is largely beyond the comprehension of observers outside Saudi Arabia—and even Saudis are having difficulty processing the change that is occurring. The Saudi leadership needs to get comfortable will all the tools of public diplomacy and employ them in a systematic way if they want to gain influence on publics around the world that are suspicious if not hostile to Arabs and Islam. According to recent polling, they even have some work to do with their Middle Eastern neighbors. Saudis will not always win over skeptics, but Saudi Arabia will continue to limit its own influence if the country’s public diplomacy is confined to awkward, ineffective, and possibly counterproductive symbolic acts.

Richard LeBaron is a visiting senior fellow with the Rafik Hariri Center for the Middle East working on the Gulf region.

Image: Kingdom of Saudi Arabia delivering a statement before the Security Council on "The Situation in The Middle East," April 2013. (Photo: Permanent Mission of Saudi Arabia to the United Nations)