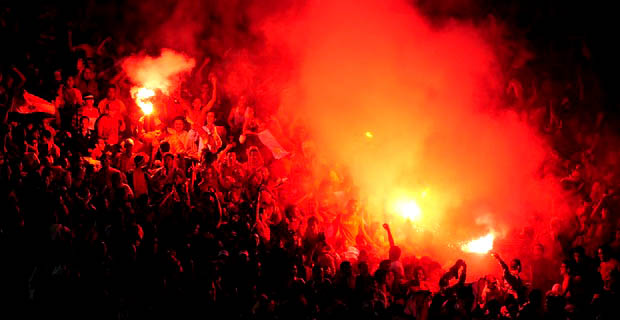 When Hosni Mubarak’s former Interior Minister Habib El-Adly headed Egypt’s feared and notoriously repressive security apparatus, the ministry amended its former slogan, “The police serve the people” to “The police and the people serve the nation,” signaling a subtle yet insidious shift in the institution’s philosophy and mission. After the overthrow of Hosni Mubarak last year, the Interior Minsitry decided to revert to its original slogan, “Al Shorta fee Khedmet Al Shaab” (“The police serve the people”) in an effort to rebrand the ministry’s tarnished image and signal a new and less heavy-handed approach to security.

However, the Port Said massacre following the al-Masry – al-Ahly soccer match on February 1 illustrates that the perceived shift in the ministry’s policies is little more than a rhetorical illusion.  The Interior Ministry remains as much a liability to public safety and human rights as ever before.  A simple analysis of the facts on the ground gives rise to countless unanswered questions regarding the interim government’s inept response to the deadly riot in the soccer stadium that resulted in at least 74 casualties.

Looking at the destructive chain of events that left scores of spectators dead, it’s clear that a major security breakdown and failure of routine public safety procedures contributed to the catastrophe. Soccer, the nation’s most popular sport by a long shot, is no stranger to controversy. The fiercest rivalry in Egypt, the competition between al-Ahly and Zamalek (Cairo’s two greatest clubs) has never been a friendly one, and most matches have seen  minor incidents involving fans insulting each other or throwing objects, and the occasional violent clashes. However, never in the history of Egyptian soccer – even in championship games, let alone less important league matches – have fans resorted to the level of violence we witnessed in Port Said last week. The al-Ahly – al-Masry rivalry is a historically hotheaded one, but it never before degenerated into rioting and chaos. So why would the al-Masry fans decide to start now? More importantly, why attack the fans of a team they had just defeated, and with such brutality?

One of the main reasons why highly competitive soccer games have been relatively incident-free over the years is because of the high level of security – which has deteriorated significantly since the revolution. In the past, Central Security Forces (CSF) soldiers were always positioned inside the stadium, creating cordons between the fans and the pitch, while more would always be stationed outside to maintain order as large crowds flowed in and out of the stadium. There have even been instances where army soldiers assisted CSF soldiers for big matches, especially those involving foreign teams.

However, these standard procedures were not followed in the most recent al-Ahly al-Masry match, and security forces were not deployed in anywhere near the numbers needed to secure a game of such intensity. Why is it that security forces were so conspicuously scarce? Even more baffling is the fact that both the Governor and Chief of Security of Port Said were not at the match – a match they usually attend. Why were they not present this time? Security procedures at matches are supposed to include security checkpoint and searches on fans entering the stadium, to ensure that no weapons enter the stadium. This has even resulted in the confiscation of water bottles, in addition to any object that could be thrown as a projectile, for precautionary safety reasons. So what was different about last week’s game and why were spectators not searched as usual? How were some people allowed in with reported knives, clubs and stones among other lethal weapons?

Another clear violation of standard security procedures was the presence of al-Masry fans on the pitch, as they rushed down to celebrate with the team after goals were scored on three different occasions.  Such behavior has never been permitted in the past, so why now? Why did the referee – who is required by game regulations, to stop or suspend a match in the event of outside interference of any kind – not do anything at all? After the initial bombardment onto the pitch, why were the floodlights switched off? Why did it take almost two hours for additional ambulances to show up when the violence began?

What’s worse is that the CSF soldiers showed absolutely no interest in doing their jobs, and no responsiveness to the panicked cries for help from fans being inhumanely murdered, instead choosing to stand idly by while innocent Egyptians were being trampled and asphyxiated by the stampede, thrown from the highest bleachers, or stabbed with knives. But the most shocking of all these abhorrent incidents was the discovery that the gate for the visiting al-Ahly fans’ section was welded shut. Why in the world would any gate in any stadium be welded shut during a game? Individual testimonies tell an even more disturbing story. When Port Said locals heard the chaos that had started in the stadium many of them reportedly rushed over to try and lend a helping hand, only to encounter army soldiers blocking the road and preventing them from getting through. Even more troubling is the report that family members collecting the bodies of loved ones from the morgue reported being coerced into falsely corroborating that the cause of death was suffocation — when many were directly killed by violence.

What happened in Port Said was not simply an instance of out-of-control hooligans taking their sports rivalry too far.  The attackers were not angry, or extremist Al-Masry fans. This was a planned scheme from start to finish. From the lack of security before, during, and after the game, to the non-appearance of public Port Said figures, the evidence makes it overwhelmingly clear that what happened was no accident. Hiding behind his military uniform, and his patriotic rhetoric, I can only brand Field Marshal Tantawi a coward after he stated that “these things can happen in football games,” once again blaming the violence on “unidentified citizens” – code for subversive instigators – and inviting civilians to take the law into their own hands. His words were sickeningly tone-deaf to the severity of the security breakdown, and a far cry from what is required of any leader – let alone a military man – to guide Egypt in such troubling times.

The Interior Ministry’s complicity this latest outbreak of violence takes places in a broader context of impunity and lack of accountability for abuses perpetrated by military and security personnel during and since the January 25t uprising. The past 12 months have seen thousands of civilians referred to military courts, female protesters subjected to virginity tests, and hundreds killed, all because they were supposedly working with “invisible hands” as part of an alleged diabolical plan to burn down Egypt. Yet, General Roweiny who openly admitted that he spread false rumors defaming protesters has yet to be questioned or held accountable for his incendiary comments. General Kato who suggested protesters "should be thrown into Hitler’s ovens’ has not been detained, despite widespread calls for his prosecution. General Badin, the mastermind responsible for the virginity tests along with the torture of many detainees, has not been tried.

Field Marshal Tantawi and his generals seem to think they are entitled to immunity from criticism or prosecution, as demonstrated by their order to detain Maikel Nabil last year on politically motivated charges of spreading rumors about the SCAF.  This time last year, the SCAF proudly claimed it was the so-called “savior of the revolution” and promised to oversee the post-Mubarak transition to democracy and civilian rule. But with every day that passes, disillusionment and disappointment with the military leadership is growing and the generals have stubbornly refused to take responsibility for anything that goes wrong.  While disingenuously claiming to lead Egypt toward a more democratic future, the SCAF in practice has resisted making any real changes to the institutions built by Mubarak and is clearly operating as an extension of the former regime. The fact that the Interior Ministry has not changed for the slightest since Mubarak’s ouster is just one example of many. The generals are dishonest cowards and they must be held accountable for their actions. At the moment, the police do not serve the people, and the SCAF is still protecting the vestiges of the Mubarak regime. Enough is enough, and Egyptians across the political spectrum are calling for real change and are determined to take matters into their own hands with a civil disobedience strike planned for February 11.