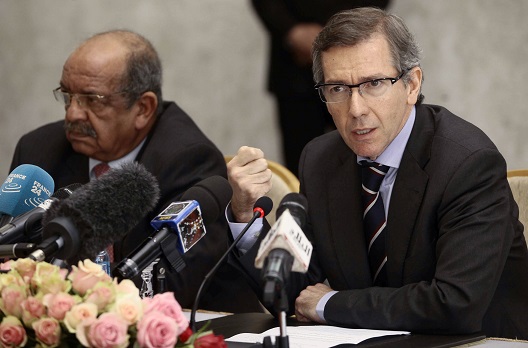 As Libya’s internationally recognized government in Tobruk and its rival self-declared islamist government in Tripoli resumed a new round of UN sponsored dialogue in Morocco that began on March 5, rival armed groups targeted each other with air strikes. Amid the ongoing turmoil, the Islamic State (ISIS or ISIL) continues to expand its activities and control over Libyan territory. In the last few days, ISIS-linked militants attacked vital oil infrastructure in the Libyan desert and beheaded two kidnapped officers in the city of Derna. These are some of the immediate and obvious challenges facing the UN brokered dialogue initiative in Libya. In my previous article titled: Libya’s Geneva Talks and the Search for Peace, I explored the challenges facing the Libyan dialogue, but also highlighted the positive indicators arising from the dialogue initiative.

The UN-brokered Geneva talks were a reaction to the escalating armed dispute resulting from Islamist and their Misratan allies’ rejection of the June 2014 elections after suffering a devastating defeat at the ballot box. UN Special Envoy for Libya Bernardino Leon hopes the talks will lead to the formation of a unity government and agreement on a ceasefire mechanism that would result in armed groups withdrawing from towns and cities. The demobilization would eventually lead to disarmament and the rebuilding of Libya’s military and police forces. Some Western countries have made the formation of unity government a precondition to the lifting of the arms embargo imposed on Libya, which Libya’s internationally recognized government and its regional allies have fought to lift in order to fight terrorism in the country.

This pressure from the international community and the significant threat posed by ISIS in Libya could galvanize Libyan factions to reach a political settlement and pull Libya back from the brink, but it could also backfire. Libya’s international partners must understand that they will have to face up to some difficult choices in Libya if the dialogue fails. They should not promote the calls for unity and consensus to appease anti-democratic forces, but rather ensure the democratic process in Libya is maintained. The suggestion by some that Libya should embrace the dialogue in lieu of the democratic process would set a dangerous precedence in the future.

Despite the positive start to the Geneva talks and the cautious optimism over the new round of dialogue in Morocco, deep distrust between the rival parties and ongoing clashes makes the outcome highly uncertain. Four possible scenarios could sway Libya along vastly different trajectories:

It is crucial that the United Nations Support Mission in Libya (UNSMIL) and Libyan powerbrokers capitalize on the positive achievements from the first two rounds of dialogue to ensure sustainability of the peace building process. These actors must:

Libyan actors and their international partners must acknowledge that terrorist groups such as ISIS will waste no time in their efforts to expand control over Libyan territory. All of Libya’s stakeholders must show genuine commitment to the fight against ISIS in order to be considered part of the solution to Libya’s current crisis.

Mohamed Eljarh is a Nonresident Fellow with the Atlantic Council’s Rafik Hariri Center for the Middle East and a regular contributor on Foreign Policy’s Transitions blog.