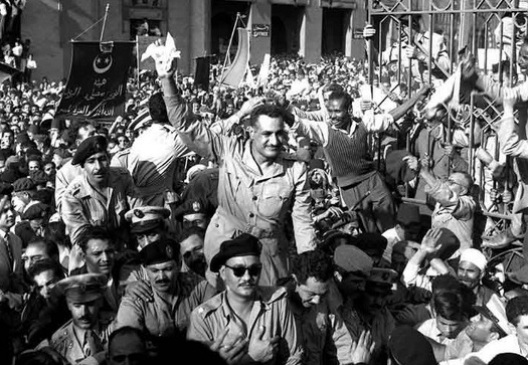 Nasser: The Legacy of a President

A charismatic colonel who played an integral role in ending the British occupation of Egypt, Nasser is revered by many for statist policies that included land reform, the nationalization of the Suez Canal, and guaranteed employment. Others continue to be enamored with the way the president stood up to imperial powers during the 1956 Suez Crisis and in his formation of the influential Non-Aligned Movement. Still, many despise the colonel for his repressive one party state, failure in the 1967 War, and embroiling the military in the country’s politics.

Stemming from Nasser’s presidency was the advent of Nasserism and Nasserists. An ideology that followers claimed embraced Nasser’s statist policies, pan-Arabist beliefs, and opposition to imperial powers, among others.

Sabbahi and Sisi: Different Sides to the Same Nasser?

Although many of Sabbahi and Sisi’s supporters have claimed that their candidate represents the aims of Nasserism, others see the hopefuls as candidates drawing upon different aspects of Nasserism, while some assert that the ideology may have never even existed.

According to journalist and political analyst, Abdallah El-Sennawy, Egyptians who see Nasser in either or both of the presidential hopefuls are seeing those aspects of his presidency he is most famous for, “One resembles Nasser in strategy and the other in policy,” said El-Sennawy, adding, “Sisi is viewed as the nationalist military man who saved Egypt from political Islamists and later stood up to the United States and held meetings with Vladimir Putin while Sabbahi is committed to the idea of social justice and has talked of the need for redistribution of wealth.”

Long time socialist activist, Shahinda Maklad said, “It is a shame” to call either of the men Nasserists as Nasser himself denied the notion of Nasserism.  She added that many view Sisi as Nasserist because the former army chief “saved them from what was perceived to be a foreign entity breaking up the country.” To these people, Sisi “unified the Egyptians and restored their nationality.” Maklad cautioned that these same citizens may be looking for the state-sponsored social justice that Nasser introduced but that the former army chief does not support such policies. While Maklad acknowledges that Sabbahi has spoken to a more socialist agenda, she asserts that this is a far cry from that of Nasser’s. Sabbahi has spoken of the need for “democracy with social justice at its core” and although he has addressed the need to redistribute wealth in the interest of the poor he, has also stated that “redistribution alone” is not the answer and that “complete development must be coupled with fair distribution.”

Ashraf Barakat, a librarian at the famed Medbouli Bookstore in downtown Cairo agrees with Maklad. “Neither of them are Nasserists” he said. “Nasserism was something specific for its time and it cannot be replicated today.” Barakat felt that if Sabbahi was truly committed to Nasserism “people in upper Egypt would have a clue as to who he is.” As for Sisi, the comparison stems from that fact that he “is perceived to have saved Egypt from a disaster for the sake of his love for Egypt.” To Barakat the real difference between the two is that “Sabbahi has sought out Nasserism by claiming he is a Nasserist and Sisi has had it pushed on him without ever claiming to be interested in it.” In reality however, “there is no such thing as Nasserism today.”

Academics and scholars who have studied Nasserism agree that searching for a Nasserist in these presidential elections is not only an exercise in futility, but suggest that it may have never existed as an ideology in the first place but rather as a historical phenomenon.

According to head of the American University in Cairo’s History Department, Dr. Khaled Fahmy, Nasserism was “a very weak ideology to start with” that has “always been a very vague set of ideas that made some sense at a particular period of time” that has “failed to renew itself.”

Dr. Abdel Aziz Ezzel Arab, a professor at the American University in Cairo who has studied Nasser extensively, goes a step further to suggest that Nasserism was never an “ism” in the sense that it was rooted in a particular dogma or theology. Rather, Nasserism was “a pragmatic experiment that never crystallized.”

“Nasser came to power with a plan that hinged upon six points: ending occupation, ending feudalism, and ending the capitalist monopolization of the economy while promoting a strong military, social justice, and a ‘democratic lifestyle,’” Ezzel Arab said. He added that the Nasserist experiment was made up of a “series of practical choices made on the ground in accordance with this plan and within the context of the Cold War.”

The professor added that the fact that it is not an ‘ism’ in the traditional sense is the reason Nasserists continue to be so ubiquitous, “His decisions and approach were always changing and these different approaches to carrying out his experiment are why so many different people are able to claim to be Nasserists.

While to many Egyptians the 2014 elections are a decision between the Nasserist who liberated the country and protected its identity, and the Nasserist who carried out reforms to eliminate class divisions, others are aware that today, the label is nearly impossible to apply to anyone at face value. If Dr. Ezzel Arab is right, the decision for those voters who are searching for Nasserism has much less to do with this label than it does with Nasser himself. For these voters, perhaps today’s vote is in fact a contest between Gamal Abdel Nasser and Gamal Abdel Nasser.