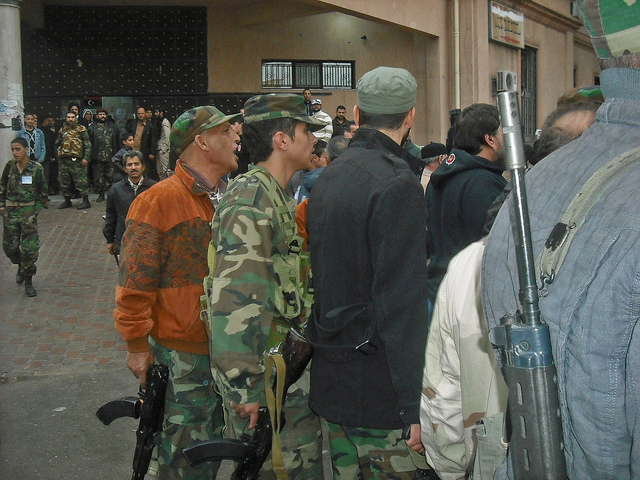 After nearly two years since the fall of Muammar Qaddafi’s regime in 2011, the unstable security situation has become a political bargaining chip in a wider struggle for power in post-revolution Libya.

Libya’s Army Chief Youssef al-Mangoush resigned a day after deadly clashes between anti-militia protesters and a government-sanctioned militia, one that nominally fell under his direct command. The clashes left more than thirty-one people dead in the eastern city of Benghazi and over a hundred wounded, some with serious injuries, in the deadliest such violence seen in recent months.

The violence erupted on June 8, when protesters in Benghazi, the country’s second largest city and the cradle of the Libyan revolution, surrounded the main camp of the Libya Shield militia brigade, a largely extremist group sanctioned and supported by the government to help maintain security. The protesters demanded that the militias submit to the full authority of Libya’s security forces or lay down their arms. The protesters, like many in Libya, view these militias as the source of a security vacuum in the country, and feel their existence in its current form (highly autonomous, both ideologically and politically) should not be tolerated.

An anti-militia sentiment in Benghazi has been growing for just under a year, particularly in the wake of an attack on the US consulate, which led to the death of Ambassador Chris Stevens and three other Americans on the night of September 11, 2012. Just over a week later, thousands of protesters forced extremist militia group Ansar Alsharia out of their bases in the city. The most recent bloodshed in Benghazi underscores growing public anger over the government’s complacency and failure to build an army capable of reining in the militias that dominate parts of the country, nearly two years after Qaddafi’s fall. The militias have become stronger and more powerful, and are using that power as part of an attempt to shape Libyan politics. They, for example, besieged government ministries and pressured the General National Congress (Libya’s interim legislator) into passing a controversial isolation law that disbars all officials who served in Qaddafi’s regime during his forty-two years of rule.  Islamists militias are also pushing for Sharia Law to be the only source of legislation (rather than the main source) and that the decision should not be put to a public vote as part of the constitutional referendum

The brigades, though sanctioned by the state, operate as a parallel security structure to the country’s police and armed forces. Libya Shield can at best be described as a paramilitary group with its own political ideology. In the meantime, Libya’s under-equipped police and military, which lack any genuine support and political commitment from the authorities in Tripoli, are unable to confront the heavily-armed and better-equipped brigades which have the backing of some powerful politicians.

In the weeks leading up to the June 8 incident, military officers (mainly in eastern Libya) were protesting against al-Mangoush and demanding his resignation. They accused him of corruption and of failing to exercise authority over the militias. On the other hand, Libya Shield militias probably supported al-Mangoush, due to his failure or refusal to rein them in or to replace them with state forces.

However, Mangoush’s resignation will not solve the security problems facing Libya, nor will it speed up the effective disarmament and demobilization of the armed groups in the country. The root causes for the security vacuum in Libya are the power struggle and the ever-expanding gap of mistrust between the different factions in the country. The appointment of a new army chief has become a political circus between the different blocs within the General National Congress, due to the significance of this role in post-revolution Libya.

The disarmament and demobilization of the armed groups in the aftermath of the armed revolution in Libya is a crucial component of post-war reconstruction and peace building, prompted by the realization that peace and stability are heavily dependent on the restoration of the state’s monopoly over the use of legitimate force.

The armed groups have a different perspective. They see the government attempting to disarm and dissolve their militias as quickly as possible, without any substantive measures addressing the root causes of what they regard as the problem. There is a genuine concern among the ex-freedom fighters groups (now referred to as brigades or militias) that the security establishment in Libya is still tainted by the presence and leadership of the same people Qaddafi depended on to crack down on his people for more than forty years. They are demanding disbarments and demobilization, alongside a security sector reform process. However, sacking or replacing officials in Libya will not solve the problem, due to the deepening mistrust crisis in Libya.

Disarmament and security sector reform will require certain steps by the Libyan government to initiate the process. First, the various security actors and security agencies currently operating in Libya need to be brought together, and a sense of trust between them restored, and agreement reached between the different factions. The agreement must ensure that security is a national agenda, rather than a battleground for control and power by different factions. Second, all parties involved need to be encouraged to adopt a holistic approach to arms management by implementing demilitarization measures for all militias without any preferential treatment of one over the others.

Mohamed Eljarh is a Libyan academic researcher. He is the Libya Transitions blogger for Foreign Policy, and the Business Insights contributor for Libya Business TV. He can be reached at [email protected]