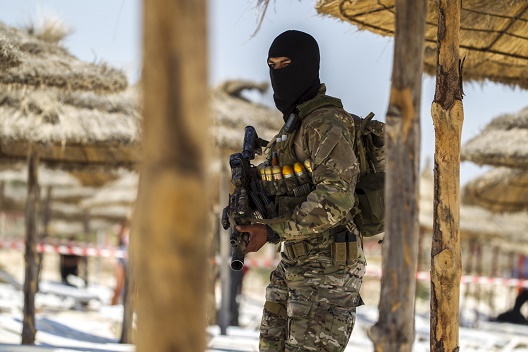 A member of Tunisia's special forces inspects the beachside of the Imperial Marhaba resort, while British, French, German and Tunisia's interior ministers arrive to pay their tribute in front of a makeshift memorial in Sousse, Tunisia, June 29, 2015. (Reuters)

It has become common wisdom in Western capitals that Tunisia is the Arab Spring’s only (partial) success story. Yet more needs to be done to protect the country from the instability that surrounds it and threatens to reverse its vulnerable democratic progress. Amid counterrevolution in Egypt and state collapse in Yemen, Libya, and Syria, Tunisia remains a functioning state, governed by a democratic constitution. For its citizens, speech is freer, votes count more, and religious tolerance is greater than five years ago. Due to events emanating from beyond the country’s borders, however, it too may revert to polarization, repression, and dysfunction.

The June 26 attack that killed thirty-eight European holidaymakers in Sousse brought Tunisia crashing back into international headlines. Tunisians allegedly trained in Libya carried out the attack. Both the attack itself and Tunisian President Beji Caid Essebsi’s response laid bare the problematic relationships between secularists and Islamists.

Tunisia’s struggle with Salafi jihadist groups has intensified since the ousting of former president Zine El Abdine Ben Ali in 2011, which catalyzed the Arab uprisings, through the Tunisian-Libyan militant nexus laid in the 1980s. When the moderate Islamist Ennahda party, took the helm of the National Constituent Assembly in 2011, it was reluctant to curb Salafi jihadist elements, perhaps hoping that political openness would entice other nonviolent Salafis into its moderate Islamist fold.

The approach failed. Rather than uniting the Islamist camp, the past three years have seen it splinter, leading to jihadist attacks on mainstream Tunisian politicians. Ansar al-Sharia’s violence and the Tunisian government’s equally confrontational response mark an escalation that seems to be shaping the latter’s increasingly antagonistic relationship with the Tahrir Party (Hizb al-Tahrir), Tunisia’s only registered Salafi political party. A curtailing of rights, however, will not likely address the factors breeding Salafis, violent or otherwise, and will exacerbate tensions. Alienating such groups would more likely lead to their radicalism and unpredictability—especially in an age where transnational networks are the modus operandi.

Recent developments in Libya provide a chance for Tunisia’s regional environment to become marginally more stable. The July 11 UN-backed agreement among discordant Libyan factions offers a glimmer of hope. Despite the Islamist-aligned General National Congress’ refusal to sign on, both the Tripoli and Tobruk governments stand to gain from collaboration in minimizing the jihadist threat. A range of meaningful local ceasefires have held in Western Libya, despite Islamist spoilers’ attempts to undermine them through violence and political machinations, such as the controversial death sentence handed down in abstentia on July 28 to Saif al-Islam Qaddafi. These developments have distracted the key actors from the fact that the Islamic State (ISIS or ISIL) is consolidating its position in and around Sirte.

All parties to the negotiations (not to mention Tunisia) would benefit from Libya’s increased security and political unity, which would allow for a broad anti-ISIS coalition. The UN-mediated deal marks an important first step, but more international and regional support is needed.

Prime Minister David Cameron recently mentioned the possibility of conducting air strikes in Libya as part of the broader offensive against militants. The United States also appears willing to acknowledge that Tunisia requires additional assistance on the counterterrorism front. Despite increasing military aid to Tunisia in the wake of the March 18 Bardo museum attack, reports allege that a US drone base, possibly intended for surveillance of ISIS activities in Libya, is in the early phase of development. While the rumors have not been confirmed, some expect that the combination of a military monitoring station in the northwest town of Haouaria and second base near the Libyan border would significantly expand US monitoring capabilities in North Africa, opening the possibility for an evolution towards a US-influenced regional military landscape akin to that of Yemen.

While both actions signal support, Tunisians require a different type of assistance. Given their genuine transition towards a multiparty democracy, the West should be lavishing them with economic assistance, training programs, and educational packages—support that combats the disillusionment and frustration that fanned the revolution, rather than temporarily mitigate violence. Such a narrow counterterror approach will not strengthen the West’s allies in the region or win the war of ideas.

Domestic Tunisian reactions to the Sousse attack also treat symptoms rather than root causes. The planned construction of a wall along the Libyan border is perhaps less concerning than the State of Emergency declared on July 4. Neither will likely halt any determined jihadist attacks. Rather, these measures represent a curtailing of Tunisians’ freedoms. In their wake, Essebsi has taken on expanded powers, police and military have increased authority, and the government has moved to close down eighty mosques. Deaf to both international and domestic activists’ concerns, parliament adopted a questionable “law against terrorism and money laundering.” Essebsi, who some see as a relic of the old guard, could be on the verge of a crackdown that would open up dangerous and possibly irreversible fissures.

Interestingly, Ennahda remains a relatively acquiescent coalition partner. Despite claims that it used a light touch with Salafis when it was in power, the pendulum appears now to have swung the other way. After ceding power following the assassinations of Chokri Belaid and Mohamed Brahmi, Ennahda did not run a presidential candidate in the 2014 elections and now appears to follow the government’s hardline anti-Salafi lead. While Ennahda’s compliance may be intended to win over moderate Tunisians, it may do more harm than good—both to itself and to Tunisia’s political culture.

Adamant secularists will likely remain unconvinced of Ennahda’s commitment to democratic principles, no matter how well it behaves. The party’s self-conscious submissiveness, however, may also alienate potential voters who would support it if they felt the party represented genuinely moderate Islamism. With Ennahda complicit in any upcoming crackdown, its supporters may abandon it in favor of more hardline Islamist groups. Similarly, an atrophy of a functioning loyal opposition within a culture that privileges “conflict avoidance, rather than conflict resolution” threatens democratic gains in ways different from, but perhaps equally important as, the abuse of executive power. Apathy may result (if politics seems like a game only for those at the top) or polarization (if moderate voices refuse to engage in constructive discourse). Either case threatens a healthy participatory Tunisian democracy.

Faced with security risks that threaten the country’s economy and situated in an unstable region, Tunisia can only do its best to protect its nascent democracy from external threats. However, subtle threats from within may prove its undoing. Respect for constitutional limits is paramount, but so is fostering a political milieu that constructively engages opposition forces—secular and Islamist alike—rather than crushing or co-opting them.

This is primarily a problem for Tunisians to solve. To the extent that Western power might help, Tunisia requires the political and financial support currently offered to countries like Ukraine and Jordan. Instead of rallying around walls and drone bases, Tunisians, Americans, and Europeans should work together to facilitate the kind of structural and systemic changes that would allow Tunisia to address its immediate security threats and consolidate its democratic gains.

Jason Pack is a Middle East historian at Cambridge University and President of Libya-Analysis.com.

Andrea Brody-Barre is a researcher focusing on Tunisia at Libya-Analysis.com.

This is an expanded version of an article that first appeared on ReligionandGeopolitics.org on July 24, 2015.