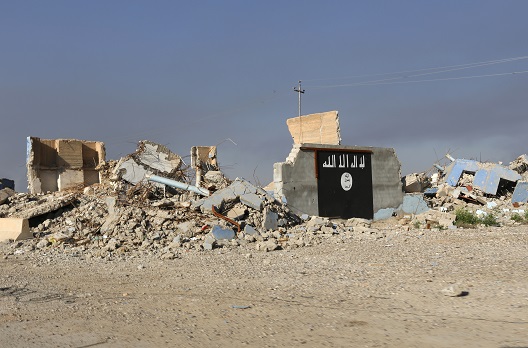 A destroyed building with a wall painted with the black flag commonly used by Islamic State militants, is seen in the town of al-Alam March 10, 2015. Iraqi troops and militias drove Islamic State insurgents out of al-Alam on Tuesday, clearing a final hurdle before a planned assault on Saddam Hussein's home city of Tikrit in their biggest offensive yet against the ultra-radical group. (Reuters)

The stunning decision of the US government to provide combat air support for Iranian-led Shia Iraqi militiamen fighting to liberate the city of Tikrit from the Islamic State (ISIS or ISIL) illustrates why Washington and its partners should shift now to a Syria-first anti-ISIL strategy. Iranian-supported Shia militias in Iraq have been conducting atrocities in Sunni Arab areas. By shifting from Iraq-first to Syria-first, Washington and its partners can fight ISIL independently of Iran and its toxic sectarian agenda while setting the stage for a post-Assad regime Syria.

Nuclear negotiations notwithstanding, the US has no business providing combat support to sectarian killers. Taking Tikrit is important. But US support should have been contingent on the Iranians and their Iraqi militiamen stepping back and yielding the offensive to the Iraqi Army. The US should limit its role in Iraq to supporting the Iraqi Army and the Kurdish Peshmerga.

Shifting to a Syria-first approach does more for US interests. It would get the United States out of the business of collaborating with Iran. If managed correctly, it could advance the US objective of removing the Assad regime while beating ISIL. Yet to work militarily it would require something that barely exists now: a ground combat component. Jet aircraft chasing ground-based marauders will not yield victory. The army of Bashar al-Assad is not interested in fighting ISIL. It concentrates instead on killing the same people ISIL is trying to eliminate: Syrian nationalist rebels who President Barack Obama wants to recruit to fight ISIL.

Congress has already approved a train-and-equip program that might, over three years, produce some 16,000 Syrian fighters to fight ISIL and defend against the Assad regime. Were they available now, they would face an ISIL force at least twice as big and regime forces (air and ground) numbering over 100,000, supplemented by Iranian-organized foreign fighters. As is, the train-and-equip initiative is too small and too slow to do much good.

Ideally, the United States’ regional partners would provide an instant ground force component to sweep ISIL from Syria quickly and facilitate in liberated Syria a Syrian governmental alternative to the rapacious Assad regime. By concentrating militarily on ISIL, permitting free Syrians to establish a recognized government and build a truly national army, the stage could be set now for genuine political negotiations.

Yet the ideal world of existing national armies creating near-term facts may be elusive. If the United States and its partners want to build a Syrian force to take on ISIL, they should at least aim for something worthwhile.

Indeed, if the United States and its partners want to beat ISIL independently of Iran and create the basis for a negotiated settlement in Syria, they would opt for Syria-first and put train-and-equip on steroids. They would build a large and capable force able to make a difference: a Syrian National Stabilization Force, one that could set the predicate for political dispute resolution through impressive military capabilities.

Such a force, with an initial manning goal of 50,000, could include three motorized divisions plus headquarters elements reflecting potent combat capabilities and the civil-military skills needed to protect civilians, facilitate humanitarian aid, and secure Syria’s cultural heritage. This force would have the mission of stabilizing Syria and the ability—albeit with the support of international partners—to defeat any combination of enemies standing in the way.

Building this force will require Syrian guidance and ultimately Syrian command. To the extent that Syrians see it as a foreign-led entity aimed at achieving foreign goals, it will attract to its ranks nothing but undesirables. Yet the formal, exiled Syrian opposition is not yet prepared to command. Over the past four years, US officials have identified many capable, collegial, and insightful Syrian opposition figures. About a dozen of them should be pulled together in an informal Syrian Advisory Task Force to help the United States and their partners build the force in a Syria-smart manner.

Indeed, if US partners will not now provide the ground forces to sweep ISIL from Syria, then raising an effective Syrian force will require that a smaller protected zone, or zones, be carved out of Syrian territory. The anti-ISIL coalition would have to prevent Assad’s air and ground forces from ravaging civilian populations. Existing nationalist units could then be folded into the force and thousands of recruits raised from a population in which universal military service has existed for decades.

Syria-first can avoid Iranian contamination, deal a severe blow to ISIL, and set the stage for a real political-diplomatic process and political transition in Syria. Train-and-equip in its present form is just too small and too slow. Given two or three more years ISIL and Assad will make Syria an upper case Somalia: a carcass feasted upon by transnational terrorists. Washington, working with partners to build a Syrian National Stabilization Force, would at least demonstrate seriousness of purpose—and it could get us out of the loathsome business of supporting sectarian killers in Iraq.