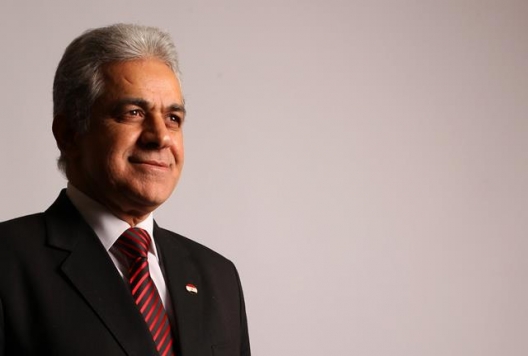 On Sunday the Egyptian Presidential Elections Committee cleared presidential candidate Hamdeen Sabbahi to participate in Egypt’s upcoming presidential elections. The Nasserist politician who has a strong following amongst the youth and left finished third in the 2012 presidential elections just missing a run-off. Since officially announcing his candidacy earlier this year, Sabbahi has not spoken in great detail about his electoral platform for the coming elections. Heba Yassin, a spokeswoman for Sabbahi’s Popular Current, discussed Sabbahi’s 2014 platform with the Egyptian Arabic daily Shorouk. In an article published on Monday, Shorouk detailed the several new planks in Sabbahi’s platform, which is expected to be announced within a week.

The most ambitious new plank of Sabbahi’s platform is a solar energy project that aims to increase output and create new jobs in Egypt’s tech industry. According to Shorouk, the project calls for the nationalization of the solar industry and the gradual development of the industry over a four year period. This includes the development and manufacture of solar panels and their use in Egyptian homes. Sabbahi estimates that the project will create 16,000 jobs in the tech industry and will radically increase energy output in Egypt. The campaign also seeks to development of a silicon industry tied to the production of computer chips and solar panels.

The campaign’s electoral platform is proposing the construction of an above ground tram in the greater Cairo area easing the current strain on Egypt’s overburdened transportation network. The high-speed tram would connect communities like October Sixth, New Cairo, and Tenth of Ramadan City to downtown Cairo and Giza providing public transit for many of the Egyptians commuting to these outlying suburbs. Outside of Cairo, the new planks also advocate for the development of Upper Egypt specifically in the form establishing an Upper Egypt Development Fund and the beginning the development and modernization of hospitals both in the region, and in other parts of the country.

Several new planks focus on combating Egypt’s high unemployment rate. This includes the funding of a million projects costing between 10,000 and 50,000 EGP designed to provide jobs for Egypt’s youth. This project is meant to begin within the first year of Sabbahi’s inauguration to help ease the plight of Egypt’s unemployed youth. The campaign is also calling for reforms to general workers’ sector while developing national training centers specializing on industry.

Sabbahi has also added several planks related to recent issues that have arose since the 2012 elections.  This includes calling for the creation of an African Affairs Commission responsible for assisting existing government bodies in reaching an agreement with Ethiopia regarding the construction of the Renaissance Dam. This newly formed commission will also help manage Egypt’s relations with its African neighbors and promote cooperation with them. While the specifics were not disclosed, Sabbahi also plans to launch a series of projects to develop the Suez Canal region.