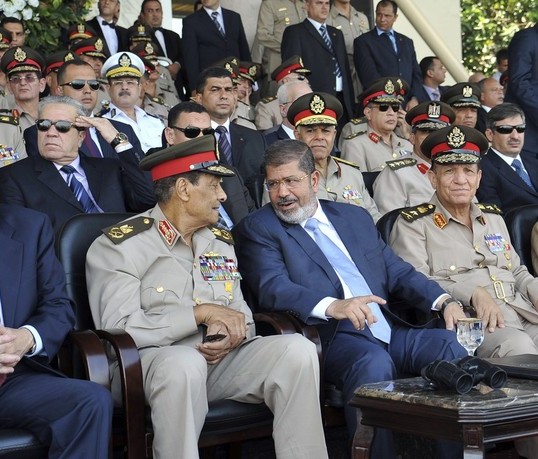 Across the West, parties have been set up that promote racist ideas, incite hatred, and embrace ideologies that may not recognize democracy in the first place. So why don’t Western governments abolish them? Because democratic principles guarantee people the right to express their opinions, as long as they don’t break the law. Old democracies have learned that preventing extremists from expressing themselves politically will not eradicate their ideas but rather add to their influence.

The only remedy for extremism is to strengthen the democratic system. Imagine that a European army seized power, abolished democracy and told the people: "The military is going to take power because if we held elections the far right parties would win." I have no doubt that if that happened in any Western country: everyone would unite to put an end to military rule and restore democracy.
This wretched choice between the Muslim Brotherhood and the military has been imposed on us in Egypt for thirty years and was former president Hosni Mubarak’s constant pretext for his own despotic rule. I often heard officials in the Mubarak regime say: "We have to rig the elections, otherwise the Brotherhood would win." In this way many Egyptians were content with despotism as an alternative to extremism. While the Egyptian revolution was able to depose Mubarak, it failed to get rid of his regime, which continues to rule Egypt under the auspices of the military council.
We are now faced with two choices. One option is to recognize an elected president who belongs to the Muslim Brotherhood, a group which many consider a dangerous extremist organization because of its secretive nature. (We don’t know who finances the Brotherhood, what its budget is or whether it really has an armed wing). All these misgivings about the Brotherhood are legitimate and make many cautious about dealing with President Morsi. The other option is to support the military council remaining in power to protect us from the Brotherhood, in which case we would be actively undoing the revolution. If we retain military rule for fear of the Brotherhood, then why did we take part in the revolution in the first place? In that case we would have to apologize to Hosni Mubarak and thank him for controlling the Brotherhood through repression and arrests.
Democracy cannot be protected from extremism by handing over power to the military, but it can protect itself through public scrutiny and respect for election results however unwelcome we may find them. Egypt now has a president who has been elected by the will of the people. The Mubarak regime has launched a vicious campaign against the president, exploiting an existing fear of the Brotherhood, but the purpose of this campaign is not to protect Egypt from extremism but rather to perpetuate military rule. All the demands of the revolution are now being portrayed in the media as Brotherhood demands. When the president called for the dismissal of the Interior Ministry generals who were close to former minister Habib el-Adly and were responsible for killing demonstrators and for the breakdown in law and order, the media portrayed that as a Brotherhood attempt to take over the Interior Ministry. If anyone calls for Ahmed Shafik to be questioned about 35 corruption complaints submitted against him over a year ago, the media portrays the complaints as part of a Brotherhood plot against Shafik.
Those who disagree with the Brotherhood politically, including myself, have two ways to remove the Brotherhood from power: either by backing the military council to control the Brotherhood, in which case we would be helping to undermine both the revolution and democracy, or by removing the military itself from power and supporting a democratic system.
Alaa Al Aswany, the Arab world’s bestselling novelist, is the author of The Yacoubian Building, Chicago, and Friendly Fire. His work is published in thirty-one languages worldwide. Al Aswany’s articles have been published widely, in such publications as The Independent (UK), The Guardian (UK), and The New York Times (US), and in French, German, Italian and Spanish publications.
Photo Credit: AP
This article is an abridged version of an Arabic article published in Al Masry Al Youm