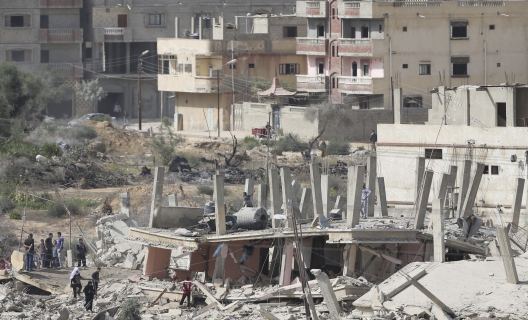 States enjoy stability when they ensure justice, when they respect the principles of the rule of law, the transfer of power, and equal citizenship, and when they uphold guarantees for human rights and individual and collective freedoms.  Societies experience progress when they are peaceful and tolerant and when they unleash the energy and potential of personal initiatives, volunteer work, and development efforts.   In isolation from society, the institutions and apparatuses of the state – even in a state characterized by justice – are unable to achieve genuine stability and steady progress.  Yet when justice is absent, when the rule of law is continuously thwarted, and when guarantees for rights and freedoms are eclipsed by authoritarianism – in times like these, it becomes particularly clear that the state cannot survive without drawing on society’s energies and channeling society’s potential to administer crises, overcome challenges, and achieve some semblance of stability and progress.

I note this in light of the situation in Sinai, where state institutions state face the threat of terrorism and employ military and security tools, along with coercive measures, in order to eradicate terrorist organizations.  The state has also promised to begin immediately compensating residents who have been subjected to such coercive measures, to end abuses committed against them, and to implement plans to develop the region economically and socially.  In Sinai, the state – whose capacities have been stretched to the limit in the context of its fight against terrorism – can engage the energy of Egyptian society and channel its potential in the form of volunteer work and development efforts.

Indeed, many Egyptian civil society organizations have exceptional experience in conducting constructive dialogue with different segments of the population in areas affected by crises.  Such organizations also have experience building consensus between these segments of the population and state institutions, including by formulating the demands and expressing the concerns and interests of the population and by providing information about the motives behind the state’s coercive measures.  Sinai is in serious need of such a dialogue between the population and the state, particularly in light of the evacuation measures that are currently displacing many in Sinai.  In addition, many student and youth groups in both urban and rural areas are genuinely interested in conducting volunteer or development work, and many have a sincere desire to contribute effectively to the improvement of living standards and economic and social conditions in Sinai.

If the potential of such groups were to be unleashed and channeled strategically, they would be able to work wonders in areas such as eliminating illiteracy, improving educational and health services, and showing solidarity with the population of Sinai.  Moreover, many companies and individuals with private industrial, financial, commercial, and investment interests have initiatives in the area of corporate social responsibility.  Such entities also have extensive human resources and organizational capacities that could be used in various development schemes in Sinai, whether independently or in collaboration with the state.  Egyptian society also comprises important trade and professional unions as well as educational, scientific, cultural, artistic, and religious institutions, all of which could contribute to the cause of ridding Sinai of terrorism and addressing the conditions that provide a fertile breeding ground for ideologies of extremism and the promotion of violence.

Egyptian society is clearly capable of partnering with the state to undertake development efforts and to work to improve the living conditions of the population in Sinai.  However, the state must first recognize the catastrophic repercussions of its ongoing conflict with civil society organizations, which are currently facing a fierce, authoritarian attack.  The state must acknowledge the similar repercussions of its hostility toward student and youth movements, which are being repressed and harassed in universities and excluded from the public sphere, and whose members (both prominent and lesser-known members) are facing punishment.  The state must address the negative consequences of its stance toward certain segments within the private sector, including its failure to protect small- and medium-sized businesses, which fear the lack of transparency and arbitrary applications of the law.  The state must end its clash with trade unions and professional organizations, which – both prior to January 2011 and until now – have faced the choice of either remaining loyal to the authorities or facing restrictions and harassment.  The state must also stop suppressing those who speak out in defense of democracy and who warn against relinquishing rights and freedoms in the context of counterterrorism.  Indeed, the state’s restrictions and repression are repelling these various sectors of Egyptian society more and more every day, and the possibilities for cooperation between the state and society are disappearing as a result.  As the state marginalizes these sectors of society, it also disempowers them from contributing to volunteer and development work in Sinai and other areas of the country.  The state is thus preventing Egyptian society from translating its widespread support for the cause of countering terrorism into specific and sustainable modes of action in support of this cause.

The result is a lose-lose situation for both the state and society.  It is time for the state to rethink its stance towards Egyptian society.

Tomorrow there will be a new margin for democracy in Egypt.

Image: Photo: People gather around the remains of a house after it was blown up during a military operation by Egyptian security forces in the Egyptian city of Rafah, near the border with the southern Gaza Strip October 30, 2014. (Reuters/Ibraheem Abu Mustafa)