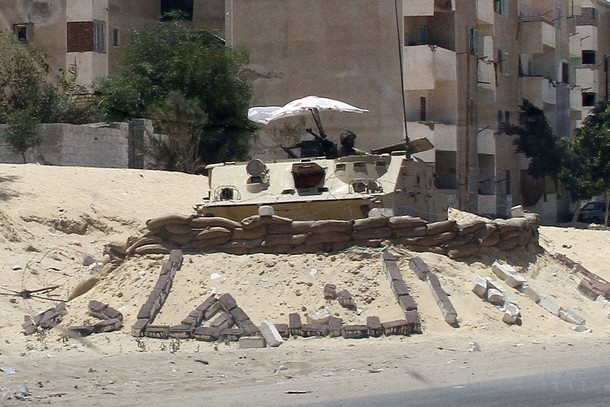 Sixteen soldiers were killed and seven injured in a terrorist attack on the border between Egypt and Israel, exposing one of many crises facing the current regime, which is an amalgamation of old and new. The president, the military, state media and national security are all intertwined in an uneasy marriage, one which is coming apart at the seams. The Sinai attack highlights a complete security vacuum both on the ground, and within the government’s leading ranks, many of whom appeared to be without access to sensitive and timely information as the incident unfolded.

It is particularly telling that Cairo rejected warnings from the Israeli government, calling for its citizens to return from Sinai for fear of a terrorist attack. Despite a lack of available information about the attack, and with no evidence on who was behind it, there are ten preliminary observations which can be made in its wake.

1. Reports have emerged that Israel’s intelligence service warned its Egyptian counterpart of the attack. It is unclear why or how these warnings were ignored. To make matters worse, according to local reports, Mourad Mowafi, the head of Egyptian Intelligence admitted to being aware of the attack before it took place, but didn’t think it would happen during Ramadan. Additionally, the terrorist attack came mere days after an Egyptian security source denied the existence of terrorist organizations in Sinai.

2. The role of Egypt’s military is to protect national security; however, its attention has been diverted. Instead of warding off attacks and ambushes on the army or police and preventing tourist kidnappings in Sinai, it is focused on domestic affairs. A foray into politics by the Supreme Council of the Armed Forces (SCAF) appears to have had an adverse effect on Egypt’s national security, as the army sets its sights on SCAF’s opponents, and continues to monitor the country’s activists. In the meantime, Egypt’s national security pays a high price for military involvement in domestic affairs. This incident presents an opportunity to reform the security apparatus and help repair its tarnished image.

3. It remains unclear how the attackers were able to commandeer an Egyptian army tank, while an entire military unit broke fast at the same time, without anyone standing guard. This is particularly puzzling when considering the unit was stationed in a high-risk area. More importantly, one must ask, how long did it take for the army to react?

4. Were Egypt’s military and political leaders aware of the incident as it was taking place? Egyptian media followed Israel’s lead, with named Israeli sources on top of the story. On the other hand, most Egyptian statements were attributed to ‘anonymous’ sources. The Armed Forces waited a full 5 hours before releasing a statement on the attack, while its official mode of online communication, its Facebook page, remained far quieter than we have seen in the past, following domestic incidents.

5. It is unclear how members of the media can communicate with Egyptian officials as major incidents of this kind unfold. Verifying facts such as the number of victims, and additional developments becomes impossible. It is also unclear what role official spokespersons for Egypt’s institutions play during these crises. In these cases, transparency and the media’s access to verified data through official sources is a must.

6. Crises are the fastest way to reveal the state media’s shortcomings. Regular programming was not suspended in the wake of the attack, and no attempt was made to broadcast accurate information. Instead, Egyptians were left filtering through rumors, most of them attributed, again, to anonymous sources. State media must be transformed into a tool which reflects the needs and interests of the people it serves.

7. After the attack, Cairo-based security experts offered theories about an incident that took place hundreds of miles away, quick to subscribe to a conspiracy theory which pointed the finger of blame at foreigners or Palestinians. This rushed analysis becomes more bizarre when considering the fact that those responsible for countless local attacks have yet to be identified, including most significantly, the Port Said massacre which left 74 young football supporters dead. There appears to be no basis for these accusations.

8. Morsi was subject to wide criticism for his initial response to the incident, while his predecessor Mubarak was not only silent, but at times met with Israeli leaders after the loss of Egyptian troops on the Egypt-Israel border. Tantawi similarly did nothing when Israel shot dead 5 Egyptian border guards last August. While more was expected from a leader who positioned himself as the ‘revolutionary’ candidate during the presidential elections, Morsi was not given a chance to react.

9. Who should bear political responsibility for the military’s mistakes in this incident, and should we have expected immediate military resignations? Morsi dismissed three key officials a full three days after the incident: Director of Intelligence Mourad Mowafi was forced into early retirement, the North Sinai governor was sacked, and the head of the Republican Guard was dismissed. Morsi also ordered the replacement of Hamdy Badeen, the head of the Military Police. The shuffle earned Morsi points with the public, after being harshly criticized for failing to attend the soldiers’ funeral. However, with the June 17 Addendum in place, Morsi is likely nothing more than a messenger, relaying SCAF’s decisions. More importantly, as has been the case with all deadly incidents in Egypt since January 25, 2011, no one has really been held accountable.

10. The attack reveals that the near complete breakdown in security in Sinai is rooted in two things. The need for the redistribution of armed forces in Sinai, which opens the door once again to reviewing the Camp David Peace Accords, and the need for a more capable intelligence apparatus in the region. Arbitrary sweeps and arrests have long been the method of containing violence in Sinai, and it has done nothing to addressing a growing problem. More importantly, the attack calls into question the army’s ability to withstand an even more serious attack in the near future.