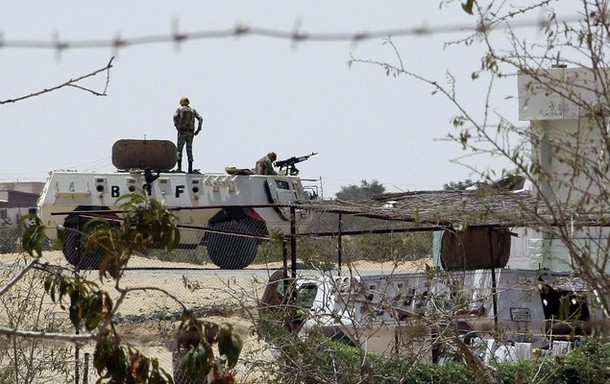 Islamist militants killed 16 policemen and injured seven in an attack on Egyptian border guards in Sinai on Sunday, in what is the latest in a string of violent incidents in the country since Mohamed Morsi’s election as president. The Egyptian military vowed a crackdown on the “infidels” responsible, while Morsi delivered a televised speech early Monday morning saying, “Those who carried out the crime will pay dearly.” Morsi’s true powers came into question within days of assuming the presidency, after a failed attempt to reconvene the dissolved parliament. The Sinai attack is a critical juncture that will have lasting effects on the authorities of the president and the country’s security.

The Sinai attack joins an ever growing list of violence in the country, with riots and sectarian conflict facing the new president within his first two months in power. Taking a forefront in Sinai offers Morsi an opportunity to position himself as the true leader of the country, but one where he also risks taking the fall for decisions made by others. The June amendment to the constitution gave all military power to the Supreme Council of the Armed Forces (SCAF). While Morsi addresses the nation and is the ‘face’ of how the regional incident is handled, consequent decisions may not be made by him at all.

While riots in the capital city and conflict in the villages are within Morsi’s domain, the border attack is far trickier than the preceding incidents combined. Not only is Morsi playing a balancing act of power with SCAF, he must also find a way to simultaneously address the issue of relations with Israel and Palestine, and do so in a manner which appeases the general Egyptian public and the Muslim Brotherhood. The attack could not have come at a worse time for Morsi.

Under a new presidency, Egypt is recalibrating relations with Palestine and Israel, and this attack could affect both. Measures taken so far are at the expense of Palestine: Egypt closed the recently opened Rafah Crossing indefinitely, with Hamas decrying the move as the collective punishment of all Palestinians. Hamas, on the other hand, willingly closed the tunnels under the Egypt-Israel border, in what could be an attempt to curry favor with the Egyptian government.

Morsi is inheriting a messy situation, one in which Mubarak’s regime would have been happy to work closely with their Israeli counterparts. The attack comes soon after a debacle in which Morsi denied sending a letter to Israeli president, Shimon Peres, expressing a desire to resume the Middle East peace process. Today, hiding behind denials is not an option, as a choice must be publicly made on how to handle Egyptian cooperation with Israel.

While the Muslim Brotherhood pressures Morsi to cut ties with Israel, he appears to be keeping in line with SCAF’s mandate: maintaining the status quo. Egyptian politicians and members of civil society weighed in on what can be done in the wake of the deadly attack. Amr Moussa, former Foreign Minister and failed presidential candidate called for the revision of the Camp David Accords saying “We do not accept the use of Sinai in confrontations with Israel without paying attention to Egyptian sovereignty.”

Many call for tighter security in Egypt, saying that working with Bedouin tribesmen in the area should be a priority, while others recommend the redeployment of forces in the Sinai region. Former National Council for Human Rights Vice President Ahmed Kamal Abul Magd said that national security should be a priority, adding that the attack could be an attempt to discredit the country’s newly elected president. The Muslim Brotherhood shares this opinion, pointing the finger of blame at Mosaad. Israel’s ambassador to the US, with Michael Oren made a similarly strange accusation, claiming Iran is behind the attack, but later retracted it. No one claimed responsibility for the attack but both Egypt and Israel blamed Islamist militants.

Unfortunately, as is the case with far too many incidents that take place in Egypt, authorities set a precedent in the handling of the fallout. An attack last August which left six Egyptian soldiers dead was not followed by any concrete action. The inability to take measures or punish perpetrators has left the country open to consequent attacks. Authorities must be heavy handed in its dealings with these attacks, rather than sitting by while Israel secures Egypt’s borders.

The decision to close the Rafah Crossing seems to be the obvious choice to maintain security, but it is a shortsighted one for three reasons: not all of the violent attacks in Sinai can be attributed to Palestinian militants, closing the crossing strains relations with the Hamas government, and lastly, it affects the Palestinian humanitarian situation. Reinforcing security in Sinai, on the other hand, is in the interest of all three parties. Although Egypt has the authority to place more forces in Sinai, a military distracted by internal politics appears unwilling to do so.

Egypt is facing a critical moment, one which is the direct result of the ambiguity of governance, with SCAF and the Muslim Brotherhood finding an unsteady truce within their struggle. The attack involves both diplomacy, which is within Morsi’s realm, and security, which is within SCAF’s realm. Egypt is left with two leaders, both within their mandates to deal with this situation, neither of whom wants to overstep their bounds, nor be held accountable for failure. The current situation necessitates both more cooperation in the short term and less ambiguity in the executive structure in the long term.