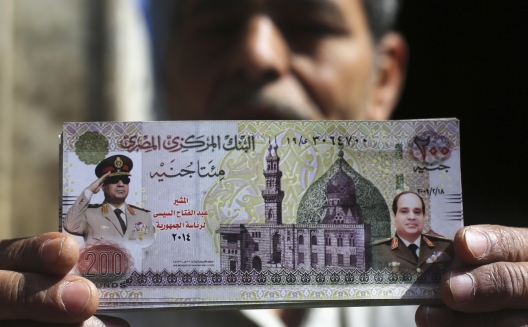 At the end of March, Egypt’s high electoral commission  announced the dates of Egypt’s presidential elections. As expected former Defense Minister Abdel Fattah al-Sisi announced his candidacy joining long time activist Hamdeen Sabbahi in the race for the presidency. The success of Egypt’s next president will, for the most part, depend on how he addresses the economy. Burdened by instability, lack of foreign investment, high unemployment, acute energy crisis, and crumbling infrastructure, Egypt’s battered economy will require sound macroeconomic policies to recover. The uprisings against both Hosni Mubarak and later Mohamed Morsi were in part related to Egypt’s deteriorated economic conditions. While neither candidate has proposed any clear economic policy for their administration, both have given subtle hints about how they would address Egypt’s economic ills.

The issue of foreign assistance is a controversial one in Egypt. The Morsi government was in talks with the International Monetary Fund (IMF) to secure $4.8 billion loan to help stabilize the economy. The talks, however, hit a snag when Egypt refused to restructure energy subsidies. Egypt and the IMF are expected to hold annual consultations after the presidential elections, according to the current Minister of Finance, Hany Dimian. However, nothing has been said about resuming talks for the loan itself.

During his speech announcing his presidential candidacy, Sisi mentioned Egypt’s reliance on “donations and assistance,” calling the situation “unacceptable.” At least one Gulf country, the UAE, has made it abundantly clear that the aid will not last forever. According to a report from al-Monitor, Egyptian officials are expecting another installment of economic aid from the Gulf after the presidential elections.  The report also implied that future Gulf aid is contingent on a Sisi victory.

Sabbahi, who prides himself as a Nasserist, has continually voiced his rejection of Egypt’s dependence on foreign assistance during his political career. He has in the past criticized the IMF’s policies, saying they perpetuate poverty in industrializing nations. He told Lebanese newspaper Al-Safir earlier this year that “Egypt will not live on aid from anyone, even from our Arab brothers.” According to Sabbahi, if Egypt were to reject western economic principles, such as deregulating markets, and adopt several economic reforms Egypt could achieve economic independence. Last year, he called for a ban on all exports of raw materials so they can be used for domestic production.

During the January 25 revolution crowds chanted for “Bread, freedom, and social justice.” Since the initial uprising, Egypt has struggled to balance the needs of its impoverished against balancing the state budget. These competing agendas have hampered the development by successive post-Mubarak governments of any real coherent economic policy. Sabbahi, who wears his underprivileged upbringing with pride, has made social justice the center of his economic platform. Among the policies Sabbahi has advocated in the past are increased taxes on the wealthy and expanding Egypt’s already bloated public sector to provide jobs for the poor. He has also argued for a one-time 20 percent tax on Egypt’s wealthiest one percent intended to balance the budget.

Sisi’s position on this issue is much harder to discern. During a speech delivered on March 6, Sisi called the economic situation in Egypt “very, very difficult” before adding, “The country will not make progress by using words. It will make progress by working, and through perseverance, impartiality and altruism. Possibly one or two generations will have to suffer so that the remaining generations live.” These sentiments were echoed during the announcement of his candidacy. Some of Sisi’s critics have taken these remarks to mean that he will cut or eliminate subsidies. Although Sisi has asked the Egyptian people to make sacrifices it is difficult to speculate about what those sacrifices will be.

Modern Egypt has a long history of state intervention in its economy. Anwar Sadat first began reforming the markets during the later years of his presidency and Mubarak continued on this course during his presidency. These market reforms and the corrupt form of crony capitalism were among the grievances against the Mubarak regime. To a degree both Sisi and Sabbahi favor a more statist approach to the economy. Sisi will likely continue to protect the military’s economic interests. While serving in the Morsi government Sisi vigilantly protected the military’s interests including exempting the military budget from civilian and government oversight. According to reports he is likely to campaign on two large military backed development projects that he helped organize while defense minister. The first is a major housing project in collaboration with the UAE based company Arabtec.  The second is a joint venture between the military and international firms from the Gulf and Asia to develop the Suez Canal zone. These projects reflect a belief that the military, infused with Gulf capital, is going to spark economic growth.

Throughout his political career, Sabbahi has frequently criticized free markets and been an advocate for the state’s role in the economy. Earlier in his political career Sabbahi described his economic policy as a marriage of “socialism and free-markets.” It is not clear exactly how this joint system would be comprised. Sabbahi has supported the state’s ownership of some industries but also has assured businessmen the state will not nationalize successful Egyptian companies.  In the past Sabbahi has supported more government fees on businesses using natural resources and stock market transactions.

There are several areas of both Sisi’s and Sabbahi’s future economic policy that remain unclear. In a basic sense, Sisi may represent a return to Mubarak era economic policies. The transitional government, in which Sisi likely had considerable sway, has been in talks with several Mubarak-era businessmen who fled Egypt following his fall regarding their return. Sabbahi is the flip side of the coin, endorsing Nasserist policies that failed to solve Egypt’s economic issues in the fifties and sixties. Both candidates are likely to receive very little leeway if elected. After three years of economic turbulence, Egyptians have little patience for a new administration’s growing pains.