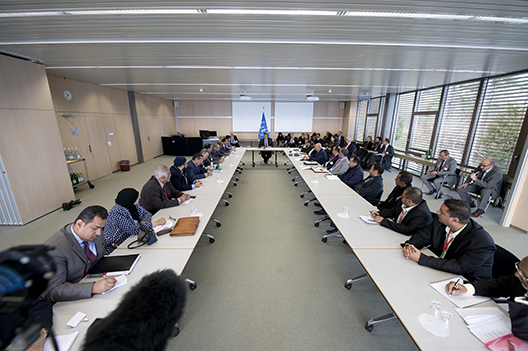 UN Special Envoy Ismail Ould Cheikh Ahmed has worked tirelessly to keep Yemeni peace talks alive in Kuwait, expressing cautious optimism.  He described the truce on the ground as holding at around 80 to 90 percent, even as the delegations of the Houthi-GPC alliance and the government of Abed Rabbo Mansour Hadi express frustrations at the other and even periodically walk away from the table.  Most recently, the Hadi delegation pulled out on May 17 for a second time, stating that the Houthis had “torpedoed the talks completely” by backing out of earlier commitments. On Saturday, Hadi agreed to return to the table after the direct appeal of Qatari Emir Sheikh Tamim bin Hamad Al Thani and UN Secretary General Ban Ki-moon during a meeting in Doha. Saudi Arabia periodically asserts that it will take Sanaa by force if the peace talks fail, but its ability to live up to that threat is unlikely.

Such back and forth and repeated blaming is disheartening, but not unexpected. But between such moments, subcommittees have been discussing key issues, including how to revive the political process and restore state authority. The peace process is far from dead, even if the climb remains steep. In fact, the on-again, off-again talks represent one of the best opportunities for a near-term resolution to one of the region’s civil wars.

Indeed, despite the ongoing tensions—which are expected when warring parties sit down to talk—small and symbolic shifts should not be dismissed in the face of the expected dramatic posturing.  The Saudi-Yemeni border remains relatively calm, for example, and the sides have concluded multiple prisoner swaps.  These efforts do not necessarily built trust, but they expand the ground on which a larger resolution might be built. This is positive.

Periodic statements by both sides are also promising. In an interview with NPR that aired May 16, General Ahmad Asiri, a spokesman for the Saudi-led coalition, said he regretted the civilian deaths caused in the execution of its campaign. Saudi Foreign Minister Adel al-Jubeir also said earlier this month that the KSA would no longer wage war on the Houthis, turning its attention instead to Al Qaeda in the Arabian Peninsula (AQAP) and the Islamic State (ISIS or ISIL).  Unlike jihadi extremists, “the Houthis are Yemenis and our neighbors with whom one can hold talks,” he told al-Arabiya. Minor shifts in rhetoric have come from the Houthi side as well. As Yemen analyst Adam Baron put it, Mohamed Abdulsalam, the official Houthi spokesman and head of their delegation, “has been on a charm offensive in Saudi and Gulf media,” delivering multiple interviews with toned-down rhetoric.

Still, the challenges ahead are not insignificant. Most troubling if not surprising is lack of agreement on the central issue of who will lead the new government. The Houthis understandably want a role and do not trust that a Hadi-led transition would be inclusive. Hadi and his Gulf backers want nothing less than the full implementation of UN SC resolution 2216, but that one-sided document calls for nothing less than the surrender of the Houthis and restoring Hadi as the head of Yemen’s “legitimate” government.

With Hadi as the head of Yemen’s “internationally recognized government,” it bears reflection on the importance of the word “internationally” in that phrase. The United States, Saudi Arabia, and other nations may accept him as Yemen’s legitimate leader, but the reality is that few inside Yemen view him as such. To many, he is little more than a puppet supported by Saudi Arabia in pursuit of its own interests in Yemen. For others, he may have had a legitimate role following his election as interim president in 2012, but that two-year term expired in February 2014, well before the Houthi invasion of Sanaa in September of that year. As such, for many (particularly but not only in the north), he no longer has any legal basis to claim a position of authority in the Yemeni government. The United Nations and other regimes may see little alternative to Hadi for the moment, but it is crucial for a peaceful transition in Yemen to remember that many Yemenis do not share that view.

And while Yemen’s “legitimate” government periodically declares that Aden has been liberated, the more meaningful reality is that Hadi and his government remain in exile and much of Aden and the south remain unsafe. As the “temporary” capital, Aden is highly divided, with few jobs and violence routine.

Another major challenge is to move toward a much more inclusive process by bringing in diverse parties, most notably from the south. Southerners do not embrace Hadi as their representative, and indeed they are no longer united, if they ever were. Large demonstrations in recent weeks have underlined that significant portions of the south would prefer some form of secession. Hadi has consistently opposed a divided Yemen. Bringing in southern voices directly into the peace talks would increase the possibility of reaching an ultimate arrangement that might accommodate some of their concerns. Without question, excluding or ignoring those voices will only push a real peace further into the future.

Image: Ismail Ould Cheikh Ahmed, Special Envoy the Secretary-General’s for Yemen with of the delegations from Sanaa for participate for Consultations on Yemen in Switzerland on December 15, 2015. UN Photo / Jean-Marc Ferré