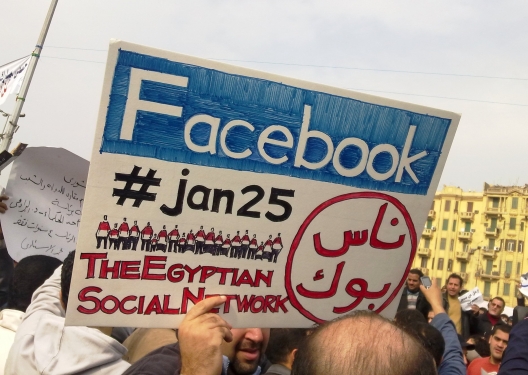 Zeinab Mohamed, an Egyptian blogger who joined twitter in January 2007, never imagined social media websites could come to represent Egypt’s “virtual political spectrum.” Not only has social media become a platform for political expression, it is also a tool for spreading awareness, and at times, for exerting pressure.

“People found a window to say what they wouldn’t otherwise without social media,” the blogger known as Zeinobia told EgyptSource. “Rather than joining a political party, social media became their random, unorganized parties with all the different political affiliations and views,” she said.

Much has been made of social media in Egypt since the 2011 uprisings that ended with former President Hosni Mubarak’s ouster, but Mohamed al-Khouzami, a social media consultant with Deutsche Welle’s Cairo bureau believes social media use in Egypt has changed since 2011.

“First of all we need to take into consideration some statistics,” he says. “In 2010, there were between 35-40 million Facebook users in the Arab world. Today there are between 65-70 million.” In Egypt specifically, 87 percent of Egypt’s internet population uses Facebook and over a quarter of its total population, or 25 million people, are now on the social platform. By comparison, in 2011, only 4.7 million people in Egypt used the social network. On Twitter, Egypt had just over half a million active users in 2013, compared to 129,000 in 2011.

Khouzami attributes this rapid growth in part to the role social media played in the revolts in Tunisia, Egypt, Syria, and Libya. The Facebook page, We Are All Khaled Said, created by Egyptians in late 2010 spread awareness about one case in particular—that of Khaled Said. The twenty-eight year old was beaten to death by police officers in Alexandria, and his story became a catalyst for events in 2011. “This was fully documented and circulated on Facebook,” Khouzami explains.

Khouzami compares Said’s case with a recent incident which took place in November in Upper Egypt’s governorate of Luxor. Talaat Shabib, 47, was arrested at a local café in Luxor on charges of illegal possession of prescription painkillers. Hours after his arrest, Shabib died in custody.

As hundreds protested Shabib’s death in Luxor, social media users circulated videos and photos on Facebook and Twitter using the hashtag, “We are all Talaat Shabib,” alleging to show the man’s body with signs of torture on it. Nine policemen, including the Luxor Police Station’s Investigation Chief, are now facing trial on charges of torture, after a forensic report confirmed an injury led to Shabib’s death.

Prior to 2011, Egyptian blogger Wael Abbas was alone in documenting and publishing incidents of police torture. Access to social media platforms in Egypt has changed that, with Khaled Said’s case one of the first to gain national recognition, Khouzami explains. “Today as the documentation process is much easier through social media and people can easily hide their identity, we find very similar stories every now and then,” he adds.

Mohamed Atef, another Egyptian blogger, also believes social media has been influential in publicizing police violations. The platform, he says, makes it easier for news to travel faster. “Citizen Journalism has beaten web and print journalism in terms of being quicker in getting allegedly documented details and news from everywhere.”

As is the case in many countries, social media is often the first to break a story. A firebomb attack which took place in a night club in Cairo’s district of Agouza in November in the early hours of a Friday morning, was first reported by a Facebook user passing by, Atef says. “No press agency or newspaper has correspondents covering all places all times, so we can say that journalism and citizen journalism are two faces of the same coin,” he explains. While this carries with it some risks—the spreading of misinformation by citizen journalists who aren’t bound by the need to fact check—it has also proved to be a tool for social good.

Atef points to the recent suspension of al-Nahar TV anchor Riham Said. The host was suspended after airing private photos of a woman whose assault in a Cairo mall was caught on tape. Her suspension came after a vocal social media campaign which called not only for a boycott of the show, but for her prosecution as well. In the days that followed, many advertisers announced they were pulling their sponsorship of Said’s program. Deutsche Welle’s Khouzami thinks that this could not have happened without social media pressure.