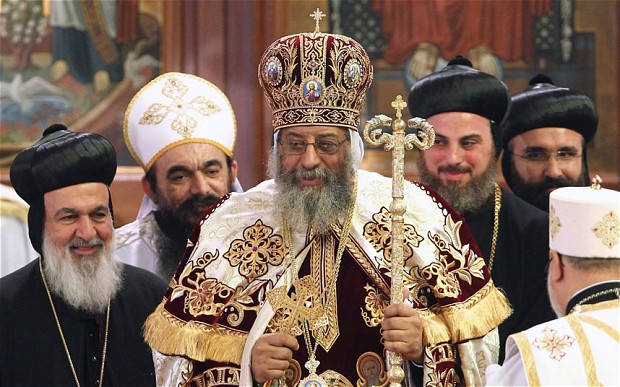 As Pope Tawadros took his seat on the papal chair of St. Mark, he was the picture of spiritual reflection. His demeanor was subdued, almost resigned to his new responsibilities. On a few occasions he shed a tear.

Two days prior, the church – behind closed doors – was the picture of enflamed political discussion. According to the Egyptian newspaper Youm7, Bishop Pachomious polled representatives of the Orthodox, Catholic, and Protestant Churches, with 95% agreeing to withdraw.

Bishop Pachomious presides over the diocese of Beheira, where now-Pope Tawadros served as his assistant bishop. Tawadros is hailed as a close disciple of Pachomious, and had previously announced his desire to see the church return to its spiritual roots, leaving politics for the Coptic people.

It was only right and fitting for these two figures to feature prominently during the papal ceremony. Following the reading of the gospel, Pachomious introduced the new pope. Tawadros’ gravity was matched by Pachomious’ triumphal proclamation. "I tell him I will be his son and his servant," stated Pachomious, "for we know the meaning of spiritual fatherhood." He then exclaimed, driving home an intended contrast, "There is no struggle for authority in the Coptic Orthodox Church!"

The contrast, of course, is with the Egyptian political system, which the church strove hard to rise above. The election process, while it has its critics, was consensual and transparent, with the final choice of Tawadros made through holy lot. But a contrast also comes through in the necessary engagement between the church and this very political system it wishes distinction from. Agreement between the political forces granted the church three representatives in the constituent assembly, tying their voice to the process of state formation. There is no contradiction between the two scenes above, but neither is the church free from the struggle for authority.

After his election but before his ascension to the throne, Bishop Tawadros indicated he would not accept a constitution dominated by ‘extremists’, and would coordinate with al-Azhar in this regard. In this withdrawal, however, the church acted alone, though it was followed by many resignations by secular members of the assembly.

According to the Youm7 report, Pope Tawadros received the text of the withdrawal letter. This indicates he was not a part of the process, though given the opportunity to validate it. According to Bishop Yohanna Golta, Deputy Patriarch of the Coptic Catholic Church and its representative in the constituent assembly, the pope’s distance was deliberate. "The goal of Bishop Pachomious’s announcement … was to avoid entangling the new pope in this matter," he said.

Golta indicated the decision involved approximately fifty individuals, including many secular figures. The discussion was held in the presence of Samir Marcos, the assistant president for democratic transition in Mohamed Morsi’s administration.

The church acted quickly to make its decision in light of Tawadros’ coronation, but its internal discussion had been ongoing for two weeks, stated Golta. The heart of the issue, in his opinion, concerned Article 220 of the draft constitution which defines ‘the principles of sharia’ as stated in Article 2.

"Expounding upon the principles is not fitting for the constitution but is religious education belonging nowhere except in the books of Islamic jurisprudence," he said. Even if the decision was taken to keep Pope Tawadros free from the strain of this choice, politics invaded his installment ceremony nonetheless. Despite earlier agreeing to attend, President Morsi avoided the occasion. Instead he sent Mohamed Refaa Tahtawi, his chief of staff, as his official delegate. Samir Marcos was in attendance as well, as was Prime Minister Hisham Qandil.

Morsi’s decision disappointed many Christians, though it pleased others. For its part the church stated it understood the circumstances regarding his absence. These circumstances, however, are left undefined – both by the presidency and the church. Some believe Morsi bowed to Salafi or Brotherhood pressure not to appear in a church. Others argue that with pressing problems in Gaza and a train disaster in Assiut, his demands were too many.

Regardless of the explanation, during the ceremony Bishop Pachomious publicly thanked President Morsi for sending a deputy, but according to a church source, many were relieved he did not come. Security factors were one concern, but so also was the potential negative reaction of some in the Coptic community.

Perhaps Morsi, like Pachomious, also spared Tawadros the difficulty of political complications. The pope may prefer a non-politicized papacy, but this luxury may not be afforded until Egypt’s government stabilizes, if then.

All spiritual considerations aside, this burden is worthy of solemnity. Perhaps it also provides a window of understanding into Tawadros’ tears.