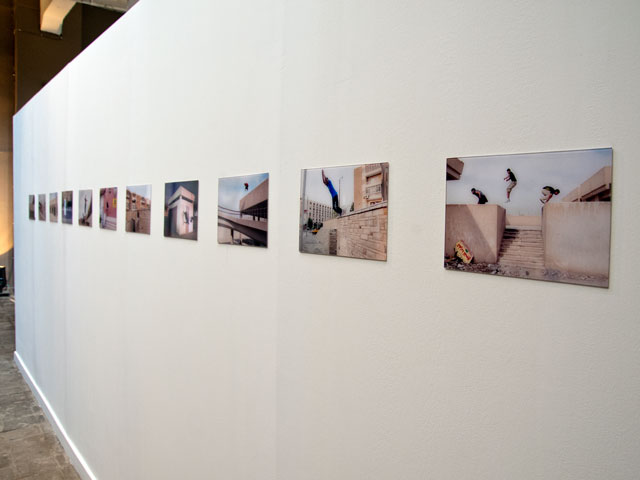 Despite a backdrop of sporadic clashes, presidential power grabs, and crackdowns on freedom of expression, Egypt’s arts and culture sector has flourished since January 2011. While many artists feel unable to respond effectively to political events in their personal work, and traditional institutions have been faced with varying challenges, the past two years have given rise to a number of vibrant new spaces and initiatives. It is the way artists organize themselves and seek audiences, more so than their artwork itself, that represents new ways the art world is engaging with revolutionary politics and conversations.

While some artists have intentionally divided their practice between political and non-political projects, others have structured their current projects to accommodate the rapid pace of political developments. ‘The Living Newspaper’ at Artellewa is one such example, a series of socially engaged theater pieces performed every two weeks, in which people can react artistically to the news and social issues.

Changes to the Institutional Landscape

Egypt’s fluid political situation has proven a similar challenge to some of its institutions. At the end of December 2012, the Alexandria Contemporary Arts Forum (ACAF) closed in light of the current social and political conditions. After seven years as a cornerstone of Alexandria’s art scene, ACAF decided that their artistic and educational activities, as well as overall context based criticality, were “no longer sustainable” through Egypt’s transition.

Yet a number of new exciting institutions have emerged from the political flux. In contrast to ACAF, Beirut was founded with the express purpose of offering a platform to negotiate contemporary social and political changes through an artistic and creative lens. A new initiative that opened in Autumn 2012, Beirut is a self-described “new space for thought” that “means to be mindful of the rapid changes we are experiencing in Egypt and the region,” the founders write. “At this crucial time of transition, we intend to make room to contemplate contemporary life from the position of art, and to provide a space of response.” Recent exhibitions like ‘The Magic of the State’ as well as film and discussion programs like ‘Cultures of Resistance’ live up to these goals.

Beirut is one of many independent art spaces established during the past year. In a renovated apartment downtown, Cimatheque was founded in 2012 to support independent filmmakers and build audiences for independent film in Egypt. They began screening films last summer, and will be officially opening later in 2013. The artist collective Medrar for Contemporary Art and independent record label 100 Copies each relocated to new spaces in the past year. Medrar is a platform for young emerging artists in Egypt with a focus on the digital arts, founded in 2005 as an alternative to the established artist and institutional scenes. In early 2012, Medrar moved to a new location in Garden City large enough to host exhibitions, and where they plan to host innovative residency and curatorial programs. 100 Copies, which was established as a record label in 2006, gained a physical presence in summer 2012. They have hosted a series of talks, concerts, performances and workshops in their new location downtown, which is also home to a recording studio.

Out of the Gallery, into the Street

A number of new festivals have been initiated in Cairo over the past two years, with four major art and culture festivals held during the month of April alone. The Digital Egypt Arts Festival (DI-EGY) ran from March 27—April 10, with the aim of exposing Egyptian audiences and young Egyptian artists to digital art mediums and new technologies. The second edition of the Downtown Contemporary Arts Festival (D-CAF) runs from April 4—28 and features a diverse, multi-disciplinary program of visual art, theater, music, dance, and film by Egyptian, regional and international artists. D-CAF is especially noteworthy for its use of location – in addition to hosting events in established downtown cultural institutions, it also uses “non-traditional sites such as historical buildings, storefronts, alleyways, and rooftops as sites for performances, events, and arts installations.” Further adding to April’s cultural agenda, and as a response to the Rawabet Theater’s closure, Townhouse Gallery hosted the first edition of the interdisciplinary Hal Badeel (Alternative Solution) festival from March 24—April 17.

Yet perhaps the greatest contrast to Cairo’s traditional arts scene and audiences is the street festival al-Fan Midan (Art is a Public Square), which celebrated its two-year anniversary this month. Al-Fan Midan is a public arts festival held every two weeks in Cairo’s Abdeen Square, as well as in governorates around Egypt. In contrast to the international focus of DI-EGY and D-CAF, al-Fan Midan aims to support independent and often revolutionary Egyptian arts, building both cultural and political awareness. Al-Fan Midan attracts a broad audience, including families with children, and audience members beyond usual patrons of the art scene. It also overcomes the traditional relationship between state and private art initiatives, drawing support from both the Independent Culture Coalition of artists and art professionals, as well as the Ministry of Culture.

These additions to Cairo’s cultural scene, in addition to the city’s flourishing street art, have in turn changed the way public art is received. “I see a great shift in society in Egypt with regards to public interventions,” says Dia Hamed, Projects Director for Medrar, which curated D-CAF’s visual arts program. “Before it was something really unusual; people would wonder ‘Is this candid camera?’ Now they realize it is a performance, so the question is different – they ask ‘Is it political? Is it related to the revolution? Or is it just artistic?’ The way the public interacts with art is changing.”

In addition to interacting with new audiences on the street, Egypt’s art scene has witnessed a growing movement of salon-like cultural activities, where art has moved from official institutions into people’s homes. The Table Museum was one such initiative, hosting micro-exhibitions from January to August 2012 in a dining room table in an apartment in Garden City. Each month, an artist was invited to create artwork to be exhibited in two display boxes carved into the table. Residents of the apartment lived with the art for thirty days, and also curated a series of conversations with the artists about their work.

The Nile Sunset Annex, which opened in January 2013, is a self-funded, experimental artist-run art space that occupies a room in an apartment in Garden City. Nile Sunset Annex prides itself on being completely independent and self-funded, and on offering an intimate setting to encourage conversation about the artwork. “People who walked in were much more willing to give [the art] a shot than if they walked in to an anonymous space; they were much more willing to talk to us and talk to the artist. They felt comfortable and would sit down on our couch. Even people who aren’t ‘art people’ will be willing to ask more questions in this space,” says Hady Aboukamar, one of the founders. ‘Zeidan Cinema’ is similar initiative in a different home: a room in an apartment in Garden City, converted into a cinema and dedicated to screening and discussing films every week.

The latest addition to the growing community of domestic cultural spaces is the nascent initiative Apt 17. The eponymous cultural space organized by artist and designer Ganzeer occupies the same apartment as the Nile Sunset Annex, and will host its own series of discussions and presentations. “It came together by accident,” says Ganzeer. “A friend and I organized a couple of film screenings on the roof, I hosted a book club meeting, and then offered the space to a visiting graphic novelist for a presentation on his work. The space just organically turned into an apartment where we organize art and culture things, and so Apt 17 came to be and is coming to be.”

Initiatives like Apt 17 focus more on leveraging pre-existing social networks than creating art for all. Yet with the rise in salon-like spaces that turn the home into a place for cultural events and discussions, there is also increasing cross-over between these types of spaces and traditional establishments. Ahram Online reports that for the next edition of Hal Badeel, organizers are considering conducting the festival in friends’ apartments with large reception areas, holding simultaneous performances for small audiences.

Developments in Egypt’s art and culture scene are not separate from political struggles. Whether through the intellectual space of Beirut or satirical political lyrics of musical groups performing at Hal Badeel, these initiatives, and the art and conversations they host are an integral part of ongoing political contestations and development. “Because of spaces like this, the revolution won’t end,” says Moustafa Kamel, manager of a new bookshop and cultural center in Maadi. “There are more books, there is more art, there are more people thinking. The revolution continues.”

Elisabeth Jaquette is a graduate student in Anthropology at Columbia University and a 2012-2013 CASA (Center for Arabic Study Abroad) fellow at the American University in Cairo. She is currently translating Basma Abdel-Aziz’s novel ‘The Queue.’ She has been based in Cairo since 2007 and tweets at @lissiejaquette.