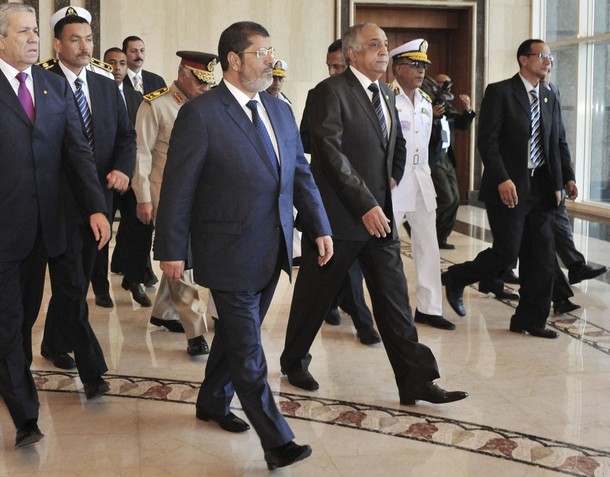 With the announcement of Mohamed Morsi’s victory, we’ve gone from zero to fear mongering in 60 seconds. While there are certainly valid arguments to be made when speaking about a mistrust of the Muslim Brotherhood and their pattern of saying one thing, and promptly doing the complete opposite, it may well be worth our while to look both ways before crossing the proverbial street hand-in-hand with the Brotherhood, Hamas, Iran and every other prominent player in the conspiracy theories surfacing since June 24.

Iran has possibly been the most popular protagonist in these stories that involve the loss of Egypt to an extremist element. This story line has, in no small part, been encouraged by an interview that appeared in Iranian media, in which Morsi was said to have spoken to the need to strengthen ties between Tehran and Cairo, as well as discussing his intention to “reconsider” the 1979 Camp David Accord.

Morsi has stated that the interview never happened, and plans to sue Iranian news agency, Fars, over the fabrication. It has, however, now become one of the main supporting arguments used when decrying the’ fall of Egypt’.

These theories  conveniently ignore the numbers, specifically those that show that in the first round, Morsi garnered just under 25% of the votes, while in the run-off, he won by a slim margin (51.73%). This hardly makes Egypt a country clamoring for a more religious or conservative rule, particularly when bearing in mind that in the run-off, a significant chunk of Morsi’s votes came from a desire to keep Shafik out of office rather than bring Morsi into it.

But throw in a congratulatory message from Hamas, ignore the fact that congratulations came from every part of the world, as was to be expected, and we find ourselves bombarded with a series of ‘I-told-you-so’ platitudes about how the Arab Spring was never about democracy, but rather was a covert plan to ensure the rise of political Islam.

A video of Egyptian cleric Safwat Hegazy speaking about the creation of a ‘United Arab State’, with Jerusalem as its capital, has been circulating for the past few days. The only problem is that as it circulates, while Hegazy really did make these statements, they have all too often been attributed to president-elect, Morsi.

Instead, let us look at what Morsi himself has actually said. He has made many promises about what he plans to do as president, and so far, reviewing the Camp David Accord is not one of them. His promises, which lie closer to home, can be seen on the newly created Morsimeter, a site which aims to hold Morsi accountable by keeping track of whether or not he fulfills his end of the deal.

On the site, his goals are divided into five categories – security (of the local variety), traffic, bread, cleanliness and fuel – all hyper-local issues.

He is also said to be looking to focus on tourism and the economy in his first 100 days as president. Salafi spokespersons in the spotlight have been quite vocal about a more conservative tourism industry, one replete with segregated beaches and lacking alcohol and gambling, and while their Muslim Brotherhood counterparts have not been as forthcoming, there have been some mild rumblings.

Statements made last year by former speaker of the dissolved parliament, Saad Al Katatny, were met with resistance from the tourism industry, in which he said, “Beach tourism must take the values and norms of our society into account. We must place regulations on tourists wishing to visit Egypt, which we will announce in advance.”

While certainly cause for concern, the vague statements do give Katatny, and by extension the Muslim Brotherhood, and easy path to backtrack right out of a more conservative tourism industry that would probably hurt Egypt’s economy even more.

Morsi has been quick to make attempts to allay fears of a Muslim Brotherhood dominance and what this means for Egypt’s future. One of the first statements made by his aides has been to announce the intention of appointing both a Christian and a woman vice president.

Dissecting the intention – there are many questions that need to be asked. How many vice presidents will Morsi have, and how many of them will simply be token representatives? And can we actually consider Morsi as more than a token president himself, having had many of his own powers stripped by SCAF?

Egypt’s future is unclear, that we cannot deny, and it is too soon to tell where the country is headed. What we do know is that SCAF has a tight hold on its interests.

An intense, if not justified, distrust of the Muslim Brotherhood has shown a rather surprising side within some of Egypt’s liberal politicians, who seem to be celebrating the short leash that SCAF has created with its constitutional addendum and the dissolution of parliament.

Agree with SCAF’s tactics or not, that leash coupled with a desperate need for foreign investment are both factors that need to be considered before making grandiose claims that Egypt is quickly descending into a dark age.

As the world focuses on Morsi as president, and the question of “who lost Egypt,” it would be of far more importance to shift the focus to the country’s unwritten constitution. This document will have much more to do with determining the path Egypt eventually finds itself on, rather than its current president. At the moment, that power has been wrenched from the Muslim Brotherhood and the rest of the country’s political players, and has been placed squarely in the hands of the ruling military.