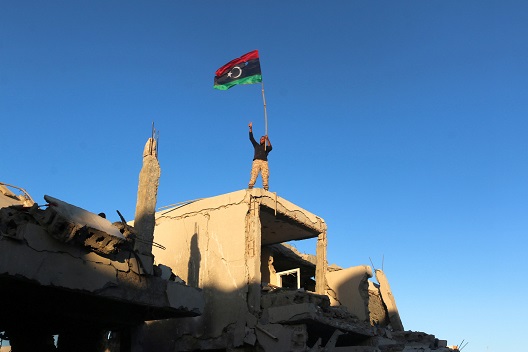 Photo: A fighter of Libyan forces allied with the U.N.-backed government waving a Libyan flag flashes victory sign as he stands atop the ruins of a house after forces finished clearing Ghiza Bahriya, the final district of the former Islamic State stronghold of Sirte, Libya.

ISIS may well hang on, albeit more discreetly, in other parts of Libya––not least because a naval blockade was not implemented prior to the offensive, and many top ISIS commanders are known to have escaped––yet there are three tentative strategic lessons from the Libyan experience which may be instructive for the anti-ISIS campaigns in Iraq, Syria and beyond.

Extraordinarily, ISIS in Libya managed to appeal simultaneously to some of the most fiercely anti-Qaddafi and pro-Qaddafi demographics.

On the anti-Qaddafi side, in eastern towns like Derna, jihadists adopted the rhetorical trope of ‘completing’ the revolution and sought to purge all remaining vestiges of the Qaddafi era. ISIS made its first official appearance there in June 2014, where a security vacuum meant that extremist groups vied for control of the isolated city since 2011. Crucially, Derna was never properly integrated into post-Qaddafi governance structures. For administrative and security reasons, Derna was left out of a series of elections––for the General National Congress in 2012, in some areas, for the Constitution Drafting Assembly in early 2014, and for parliament in June 2014––further isolating the city from Libya’s new political landscape, and supporting a narrative of grievance.

Historically ‘pro-Qaddafi’ constituencies were similarly marginalised by official power structures. On the national level, the Political Isolation Law of May 2013 banned officials from the Qaddafi era from assuming positions of power, at once removing from public service anyone with administrative experience and generating a political tool with which the new power brokers could punish their enemies.

On the local level, ISIS encroached on Sirte in 2015 by forming key alliances with elements of disgruntled tribes––the Megarha, Warfalla, Furjan and Qadhadhifa––which were once associated with the Qaddafi regime and now found themselves without any sort of stake in the new Libya. Sirte’s inhabitants and infrastructure paid dearly for resisting the anti-Qaddafi uprisings and for being the last town to fall to rebel forces on 20 October 2011. The vanquished city, once Qaddafi’s hometown, was deserted by Libya’s new government and quickly became a dangerous battleground for rival militia, before being overrun by jihadists in 2013.

The rise of ISIS in Libya, and jihadist groups more generally, was undoubtedly powered by governance failures and the mismanagement of the political transition. The legitimacy-deficit and weakness of the central government––which culminated in its fracture into two rival governments in 2014 and the insertion of a third UN-backed government in 2016––led directly to the breakdown of the rule of law, security vacuums, corruption, economic stagnation, the wholesale marginalisation of many communities, and the empowerment of violent and unaccountable militia, most of which continue to possess a stake in instability.

The UN Special Envoy to Libya used to joke that ISIS was the only functioning government in Libya. Unfortunately, in jest there was grim truth, for ISIS’s governance model was better developed than any group claiming the mantle of the Libyan government. As is the case in Iraq and Syria, so long as there is a market for non-state actors to offer protection and livelihoods to vulnerable populations, jihadist groups will continue to radicalise and recruit.

ISIS was never the most deeply rooted, nor the most militarily powerful jihadist group in Libya––those titles could be claimed by the al-Qaeda linked Mujahideen Shura Councils. Since the eviction of ISIS from Sirte, fighting against jihadi-aligned groups has continued apace, led mainly by General Khalifa Hiftar’s Libyan National Army (LNA)––in central Benghazi, where the LNA is coming to the end of a ferocious campaign against the Benghazi Revolutionaries Shura Council (BRSC), and in the oil crescent, where the LNA recently managed to retake the Ras Lanuf and Sidra oil ports after a brief incursion from the Benghazi Defence Brigades (BDB).

In conquering Sirte, ISIS only took over from where other jihadist groups left off. By 2014, Ansar al-Sharia Libya (ASL) had become a dominant force in the city, taking on important governance functions, including security patrols, dispute arbitration, traffic regulation and the meting out of punishments. At the same time, extremist fighters from eastern Libya poured in, and were later joined by contingents of foreign fighters from Tunisia and sub-Saharan Africa, including Boko Haram.

Sirte was empty of any local or national authority that could resist this incursion. ISIS fighters gradually took control of strategic locations and managed to decisively coopt a key faction of the ASL contingent in the city. By mid-2015, ISIS had built upon ASL’s administrative groundwork to lay claim to a burgeoning proto-state.

In furtherance of its expansion in Libya, ISIS may have profited from the co-optation of high-profile jihadist competitors––such as ASL’s spiritual leader, Abu Abdullah al-Libi and the BRSC’s Wissam bin Hamid––but these other, more locally-rooted groups have, by and large, blunted ISIS’s progress. The Derna Mujahideen Shura Council (DMSC) expelled ISIS in the summer of 2015 after ISIS militants killed two of its commanders. In Benghazi, ISIS has been kept at bay by local coalitions of hardliners, including the BRSC.

The jihadist presence in Libya predates ISIS and will likely outlast it. Al-Qaeda-linked groups have proved particularly resilient, in Libya and across North and West Africa, as well as in the Levant. In Syria, al-Qaeda’s Jabhat Fatah al-Sham is a shape-shifting survivor––its recent switch to the coalition model, after the manner of the Libyan Mujahideen Shura Councils and BRSC, has made it a formidable player in the country’s northwest. Its hand would only strengthen were ISIS to be pushed out of Mosul and Raqqa.

No. 3: ISIS’s governance model is unsustainable.

In August 2015, in response to the murder of an anti-ISIS cleric from their tribe, members of the Furjan attempted to rebel against the consolidation of ISIS’s control over Sirte. ISIS fighters, including members of the Furjan tribe itself, killed dozens of Furjani leaders, beheaded twelve others and crucified another four individuals in public. While these shocking acts were temporarily successful in quashing the rebellion, and dissuading further challenges, their sheer brutality, coupled with the perception that ‘foreign’ governance styles were being imposed on Libyans from abroad, contributed to ISIS’s downfall in Libya.

In Derna, which had been a hub of extremist activity for decades, deep ties to jihadist communities in Syria and Iraq were not strong enough to overcome fierce local opposition to ISIS’s approach. ISIS made enemies of local people and extremist groups alike, culminating in its ouster from the city, with popular support, after the aforementioned murder of two DMSC leaders. ISIS was more successful at subsuming its jihadist arrivals in Sirte, but revulsion with its ideas and methods persisted, such that ninety percent of the population fled. Resentment against foreign fighters ran high, particularly as leadership positions were occupied by non-Libyans, including Iraqis (e.g. Abu Nabil al-Anbari), and Saudis (e.g. Abu Amr al-Jazrawi).

ISIS’s economic model in Libya was similarly unsustainable. A capital injection from ISIS headquarters in the Levant, amounting to ‘millions’, enabled the initial expansion in Libya. Thereafter, ISIS was financially dependent upon looting, corruption, taxes and coerced donations. Abu Nabil al-Anbari judged Libya to contain ‘a well of resources that cannot dry’, yet ISIS never achieved control over any of Libya’s oil. Instead, it was left with a governance template that did not foster positive-sum economic growth, and was only sustainable so long as more and more territories were acquired for tax and plunder.

In Libya, ISIS’s governance model was financially and socially untenable. Ultimately, ISIS never managed to generate a social base. By contrast, in Syria and Iraq, this base currently exists by default, as the state is widely perceived by Sunni communities to be a sectarian predator.

Yet, ISIS’s inherent vulnerabilities notwithstanding, it is difficult to see strategic progress against the group, while uncertainty over the most basic governance questions prevails. Since December, there has been no agreement on how Sirte itself will be run––in fact, Sirte’s new mayor, elected by municipal councilors, was kidnapped in February. The question mark that now hovers over Sirte’s fate, after ISIS, joins a series of unresolved questions on the future of Libya as a whole.

Dr Alia Brahimi is an academic specialist on jihadist ideology and strategy, author of Jihad and Just War in the War on Terror (OUP), and co-Founder of Legatus, a strategic advisory firm based in London.

Jason Pack is the founder of EyeOnISISinLibya.com, president of Libya-Analysis, and author of a forthcoming report with the Atlantic Council titled The Origins and Evolution of ISIS in Libya.