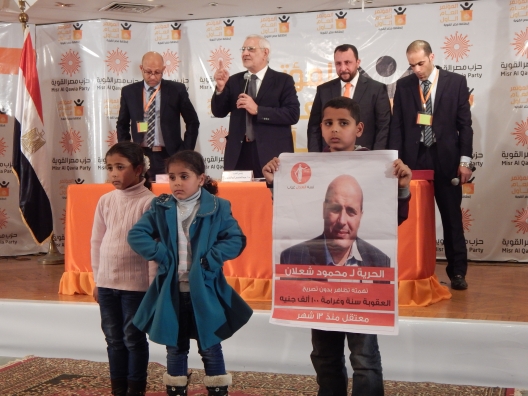 Photo: Family members hold up the picture of a Strong Egypt member who has been detained at the Strong Egypt conference. (Jayson Casper)

On an uncontested electoral list at the Strong Egypt Party’s first general conference on February 13, Abdel Moneim Aboul-Fotouh was confirmed as president along with his running mate for general-secretary, Ahmed Fawzi. But this was the least remarkable event of the day. Their acceptance speeches set the tone for the controversy to follow.

“I have a dream,” said Fawzi, purposefully echoing Martin Luther King, “that Egypt will be a modern nation with a strong economy that exports ideas to the world.” But no one was paying attention. As he spoke family members gathered in the aisle and silently held up posters of party members still in jail.

When Aboul Fotouh invited them to the front, activists seized the moment.“Yuskut, yuskut, hukm al-‘askar,” they chanted angrily: Down with military rule. Aboul Fotouh stood quietly, allowing the zeal of younger members to buttress his earlier remarks. “This regime is more oppressive than Mubarak’s,” he thundered. “How can we participate in parliamentary elections when people are killed in soccer games and in the streets?” Strong Egypt had announced its boycott nine days earlier, but the rhetoric at the conference was far stronger than the official statement, which cited “a “lack of adequate democratic standards,” as the reason for the party’s decision.

The chants against the military prompted Zamil Saleh, a photographer for Sawt al-Umma newspaper, to rush forward in criticism, shouting at the offense.  Other Strong Egypt members contained him, holding him back and ushering him out the hall. The process was calm, but al-Bawaba News quickly published he was beaten and his equipment smashed.

Shortly after the incident, party spokesman Ahmed Emam noticed the headline, published online before the conference had ended, and told the audience it was just one more piece of evidence of official state and media bias against the party. Twenty-seven locations had declined to host the conference, he said, many citing concern about security displeasure.

The Strong Egypt Party was licensed officially on November 12, 2012, and has roughly 400 voting members in its general conference, around 250 of whom were present for the election. In addition to the confirmation of the president, eighty-seven candidates ran for forty-nine seats in the high committee, which in one month will vote on the ten-member political office.

A more contentious referendum item concerned integrating leadership with the Egyptian Current, formed in June 2011 by revolutionaries expelled from the Muslim Brotherhood. Their merger was announced October 1, and at the conference a roughly two-thirds majority approved the agreement to add two Egyptian Current members to the political office, and fifteen to the high committee.

Following the conference, former parliamentarian Mustafa Bakry called for the High Committee of Political Parties to ‘erase’ Strong Egypt as a legal entity, accusing Aboul Fotouh of attacking the Egyptian government. Mohamed Moussa of the Conference Party, founded by Amr Moussa, accused Aboul Fotouh of carrying out the instructions of the Muslim Brotherhood.

Conspiracy aside, Strong Egypt does support the return of the Brotherhood’s Freedom and Justice Party (FJP) to political life. Mamdouh al-Shaib, a member of the political office, told EgyptSource that the FJP should be allowed back into the political playing field, as long as it operates separately and independently of the Brotherhood itself. Shaib believes social reconciliation must precede political, and be followed by transitional justice and a return of the army to its barracks. “Sisi is the ambassador of the army in the presidential palace, just as Morsi was the ambassador of the Brotherhood,” he said.

Fekry Nabil, also of the political committee, distinguished between legality and legitimacy. Morsi was the legal president, Nabil explained to EgyptSource, but through his performance in office he lost his legitimacy. Strong Egypt called for new presidential elections as early as March 2013, and was part of the June 30 demonstrations to remove him from office. “But no one has the legality to call for the army to remove him,” Nabil added.

From the beginning, Strong Egypt suspected the July 3 removal of Morsi was a coup d’état, but were quiet about it until their transitional suggestions were ignored. Nabil described how in early negotiations after Morsi’s removal, Aboul Fotouh demanded the FJP not be eliminated from the political scene, and a referendum be submitted to the people to legalize the proposed roadmap. If agreed, Strong Egypt offered to mobilize for a ‘yes’ vote. But subsequent killings at the Republican Guard and in the dispersal of pro-Morsi sit-ins confirmed their suspicion, and since then they have tried to balance between support for June 30, and rejection of July 3.

For Strong Egypt, an essential part of this balance is demanding the right to demonstrate, as in the licit protests of June 30, while not calling for them now, in light of the crackdown against them. They would prefer dialogue to resolve the ongoing crisis and return Egypt to democracy, for current protests carry too high a price in incarceration and blood. But Shaib anticipates another revolutionary wave is probably necessary.

So despite Sisi’s overwhelming victory in presidential elections, which Strong Egypt boycotted, the party considers his conduct in office and suppression of the political scene as confirming his lack of legitimacy following the coup. As to the legality of this election and his right to four years in office, it doesn’t much matter to Strong Egypt. “Sisi was ruling the country after July 3 in actuality,” said Shaib. “We don’t accept his legitimacy, we recognize his reality.”