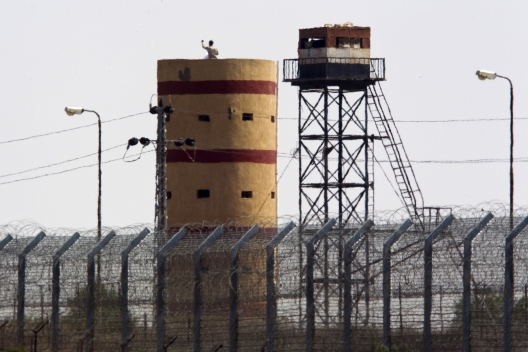 With 15 Sudanese refugees or migrants gunned down on Egypt’s border with Israel on November 15, and another five killed by Egyptian border guards a week later, Egypt is witnessing the worst case of violence against Sudanese refugees since 2005. At the time, police brutally dispersed a sit-in, where refugees were protesting UNHCR’s decision to stop resettlement for asylum seekers. Up to 30 Sudanese were killed in the incident.

This newest wave of violence reveals the increasingly fraught conditions for irregular migrants on Egypt’s borders. It also coincides with a growing, but unrelated, disagreement between Cairo and Khartoum over the treatment of foreign nationals in Egypt.

Egypt has faced widespread criticism for its shoot-to-stop policy in the past. In 2008, one year after Egypt and Israel agreed to attempt to limit the migration flows, Human Rights Watch reported that at least 33 African migrants were killed on the border by Egyptian forces in the space of seventeen months. Incidents like this are more infrequent, but do still occur. Israeli newspaper Haaretz reported in early November that Egyptian forces fired on another group trying to cross, killing one and wounding five others.

According to The Independent, the November 15 incident “marked the end of a lull in attempted border crossings, which was mostly due to an increase in military operations as Egyptian forces battle a local ISIS [Islamic State]-affiliated group.” Indeed, it is generally accepted that the Egyptian military’s intensified presence in North Sinai put an end to the brutal trafficking of mainly Eritrean refugees that saw thousands kidnapped and trafficked to border areas close to Israel, where they were tortured for ransom money—and sometimes executed—by local Bedouin tribesmen.

Some evidence, however, suggests use of the Egypt-Israel route might be slowly increasing once again, albeit at numbers that are a far cry from the pre-2011 rates. According to UNCHR statistics, over 17,000 Eritrean refugees alone crossed from Sinai into Israel in 2011. The North Africa Mixed Migration Hub (MHub), a Cairo-based network of organizations and agencies documenting irregular migration around the Mediterranean and Horn of Africa, says on September 23 a group of 29 people crossed into Israel—the largest group to do so in more than 18 months—while the annual total so far stands at 141 people. MHub’s September bulletin on migration trends meanwhile noted, “Officials [are] warning that the number is rising due to lack of effective legal measures.”

In 2015, with the army fighting a jihadist insurgency in North Sinai, the risks for irregular migrants are arguably even higher. Previously, people attempting to reach Israel fell prey to Bedouin traffickers or security forces. The increasing blend of border securitization with counter-terrorism — as seen with the housing demolitions on the border with Gaza — may also put the lives and rights of migrants at further risk.

Abuses Against Sudanese Nationals on the Rise

At the same time, Sudanese authorities have expressed concerns over the abuse of Sudanese citizens by Egyptian security forces, primarily in Cairo. On Thursday, days before the Sinai shooting, the Sudanese Embassy in Cairo submitted a memo to Egypt’s Foreign Ministry complaining about the mistreatment of Sudanese nationals in Egypt.

According to the “urgent and important” memo, a copy of which was seen by EgyptSource, the Sudanese embassy complained about a noticeable increase in abuses, including arbitrary arrests and stop-searches, against Sudanese nationals by Egyptian police and other security forces. Egypt’s Foreign Ministry is looking into the complaint, ministry spokesperson Ahmed Abu Zeid told a Sudanese newspaper last week. The Sudanese parliament is reportedly waiting for Egyptian officials to comment further.

The complaint, however, is unsurprisingly related solely to Sudanese visitors to Egypt, rather than refugees. In fact, the Sudanese embassy itself has a history of complicity in Egyptian abuses against Sudanese asylum seekers. After the Mostafa Mahmoud sit-in dispersal, the Sudanese government did not dispute official Egyptian claims that no lethal force was used against refugees at the sit-in.

Predominantly politically active Sudanese refugees, particularly those from Darfur, have also previously reported experiencing threatening phone calls, intimidation, or actual physical assault by people they claim work for the Sudanese embassy or intelligence services in Cairo. Although there has been effectively no concrete proof of these allegations until now, the unprompted repetition of such claims is worth noting.

Mohamed, a Darfuri refugee in his 40s, previously told this reporter that last year on his way home from a political meeting in Cairo on the situation in Darfur, a group of men stopped him in the street and mugged him, before telling him to stop attending the meetings.

“They said: ‘Don’t talk with Sudanese people about that’,” Mohamed remembered. “They said they could kidnap me and take me back to Sudan and punish me there, if I carried on.” Mohamed says he unsuccessfully tried to file a report at a police station. He also told UNHCR, “but they couldn’t help me, either.”

“If we talk about our problems, bad things happen in Egypt,” Mohamed said.

Leaked minutes from a high-level security meeting in Khartoum that took place on August 31, 2014, handed to US researcher and rights campaigner Eric Reeves, suggest that part of the relationship between Cairo and Khartoum is partially built on a mutual understanding that both sides pursue one another’s domestic opponents.

Mostafa Osman Ismail, political secretary of Sudan’s ruling National Congress Party, reflected on a then-recent meeting to Cairo, in which the Sudanese delegation “asked [the Egyptians] to stop the activity of the Militias and opposition and in return [promised] to work with them to control the activities of the Brotherhood.”

Sudanese Defense Minister Yahya Mohamed Kheir later discussed Sudan’s relations with other countries in the region, claiming that “the Egyptians have all the information regarding our opposition in Egypt, their activities, meetings, and relationships with the embassies in Egypt.”

Is this likely to change? Probably not.

Admittedly, it is unclear how the Sudanese backlash, which has included both official reprimands and grass-roots social media campaigns back home, will influence this relationship. Some Egyptian newspapers have speculated that the incident could impact Egyptian-Sudanese negotiations over Ethiopia’s Grand Renaissance Dam. However, realpolitik between the two governments will almost certainly come through in the end, with public statements already downplaying tensions.

What is more certain is the meagre hope for justice for the 20-plus Sudanese refugees and migrants killed on Egypt’s border with Israel in recent weeks. The newest incident is just further evidence of the endemic risks that refugees, asylum seekers and migrants face—whether in Europe or the Middle East—simply for seeking a better life.

Tom Rollins is a freelance journalist based in Cairo