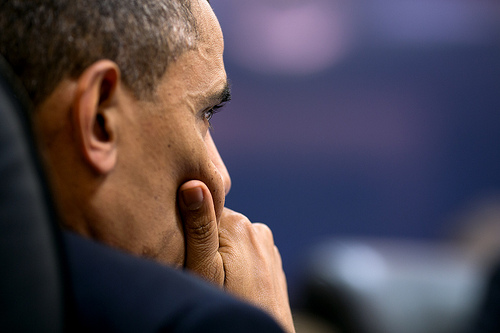 The US administration has, at long last, crossed the Rubicon of authorizing lethal assistance to selected units of Syria’s armed opposition. When Julius Caesar actually crossed the river he proceeded rapidly to mission accomplishment in accordance with a sound strategy: he wanted to get to Rome. Although the administration’s crossing is significant, welcome, and long overdue, it is far from certain whether this particular legion will move smartly toward an objective or simply mill around on the river bank.

The administration has known for weeks that the Syrian regime used chemical munitions as part of its no-limits survival campaign. The question for senior American officials was what to do about it; how to translate presidential rhetoric about red lines and game changers into action. A desultory interagency discussion of options suddenly gathered critical momentum on Saturday, June 8, 2013, when opposition General Selim Idris told US officials by telephone that Lebanese Hezbollah fighters, fresh from a victory in the crossroads Syrian town of al-Qusayr, were massing near Aleppo; that the tempo of regime military air operations was increasing dramatically, and rebel units desperately needed arms and ammunition.

Faced with the prospect of significant regime military gains in the run-up to a possible peace conference in Geneva, the administration felt obliged to make a decision and elected to reveal what had long been known about chemical weapons. One partial sentence in a White House announcement released last night encapsulates, without further elaboration, the nature of the key decision: President Barack Obama "also authorized the expansion of our assistance to the Supreme Military Council (SMC), and we will be consulting with Congress on these matter in the coming weeks."

Some of the blanks have obligingly been filled in by spinners and leakers, although all that is clear at this point is that the administration has decided to participate in the arming of Free Syrian Army elements designated by General Idris. Given the regime’s use of chemical weapons and Obama’s prior warnings concerning its inadmissibility, this is the minimal response conceivable. Indeed, if it is true (as unofficially indicated) that supplies may be restricted to small arms and ammunition and may be weeks away from delivery, there may be considerably less to this initiative than meets the eye.

The items needed by those resisting the regime and its foreign fighters need not come from American stocks. Yet if there is not a major supply effort being coordinated right now by the United States, something is seriously amiss. This matter has been under discussion for weeks. Taking two months to deliver rations and medical kits promised by the secretary of state in February 2013 was embarrassing but understandable, given the last-minute interagency discussion and decision to authorize the announcement. Idris and his soldiers need a critical transfusion now: not weeks from now.

Reporters have also been advised that a limited, southern Syria no-fly zone is under study, presumably because US arming and training activities will be mounted mainly from Jordan. Consideration is also reportedly being given to bombing regime military airfields so as to slow down Iranian resupply operations. No doubt there are many potential military options in various stages of planning, and perhaps this is the key to understanding what the administration has actually decided: to authorize a US role in the arming of selected Free Syrian Army elements through General Idris, while clinging to the balance of its "all options are on the table" formulation that has been in play for many months.

The administration has certainly done the minimum required of it in the light of chemical weapons findings, presidential rhetoric pertaining thereto, and the worsening tactical situation on the ground inside Syria. The question remains: is this enough and is this step taken in the service of clear objectives and a supporting strategy? Clearly the United States should want to end the regime-driven humanitarian crisis destroying Syria and destabilizing the region. Obviously it should work on multiple fronts to facilitate an end to a regime for which no crime is unthinkable, one that has placed its survival in the hands of Iran. Undoubtedly it should work tirelessly to influence the creation of decent governance in post-Assad Syria, featuring consent of the governed, citizenship, inclusiveness, rule of law, and civil society.

A strategy aimed at achieving these objectives would feature several elements: neutralizing the Assad regime’s artillery, aerial, and missile bombardments of populated areas; taking control of the process by which vetted armed rebel units inside Syria get what they need in terms of military equipment, weaponry, and training, working through the SMC whenever possible and ensuring that the SMC gets full credit in all cases; cautiously pursuing the Geneva option so as to circumvent and defeat any Russian attempt to freeze US and Western action by means of a lengthy and inconclusive Syrian peace process; working with the Syrian opposition toward the near-term goal of establishing, on Syrian territory, a governmental alternative to the regime/Syrian Arab Republic Government (SARG), one that the United States and other key Friends of the Syrian People would recognize, support with material and technical assistance, and help defend; and working with NATO to design and prepare to deploy to post-Assad Syria a multinational military stabilization force with peace enforcement authorities and capabilities to work with a new Syrian government to help protect vulnerable populations and neutralize stay-behind undesirable elements, including al-Qaeda-affiliated groups, Iranian security personnel, and Hezbollah fighters.

The key question is whether the Rubicon was crossed for its own sake, perhaps because of inhospitable conditions on the side abandoned, or because it was an obstacle to accomplishing clearly articulated objectives in accordance with a well-defined strategy. Having a table full of options is fine. Knowing what one wants and having a sense of how to get it is even better. While it was a welcome step, it is not clear that the announcement on the evening of June 13, 2013, reflects the product of a disciplined, focused national security apparatus or a hasty crossing necessitated by unexpected high waters.

Frederic C. Hof is a senior fellow with the Rafik Hariri Center for the Middle East. Photo Credit.