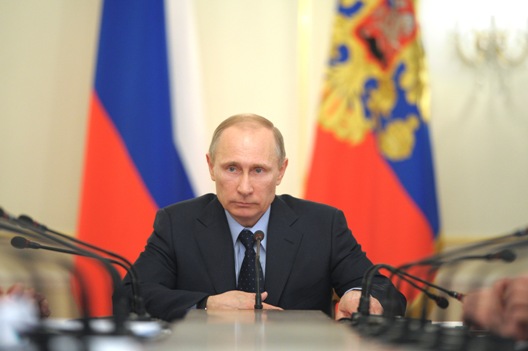 In 1961, a young US president with an active, inquisitive, open, and skeptical mind learned the hard way that the world can be cruel; that behavior regarded in polite society as restrained, rational, and reasonable can be processed by the bullies of the world as weakness to be exploited. Fred Kempe’s Berlin 1961: Kennedy, Khrushchev, and the Most Dangerous Place on Earth should be required reading for anyone serving as or yearning to be President of the United States. The Soviet Union’s move on Berlin some fifty-three years ago finds its parallel today in Russia’s aggression against Ukraine. Once again a brainy, cool, and conciliatory US president finds himself cornered by a crude bully. Berlin 1961 was a turning point in the real world education of John F. Kennedy. Ukraine 2014 may play the same role for President Barack Obama.

Was Vladimir Putin emboldened to intervene militarily in Ukraine by the perception of US weakness in Syria? He is not saying and it is impossible to know. What we do know is that Russia and Iran have worked hard to keep Bashar al-Assad in power, at least in a key part of Syria. We know that the Russia of Vladimir Putin has been offended not the least by its client’s unceasing, relentless, and heartless campaign of war crimes and crimes against humanity. Indeed, Russia has contributed virtually nothing even to mitigate the human costs of its client’s crime wave. We know that Moscow offered a chemical weapons agreement to a US president eager to avoid military strikes in response to an unspeakable atrocity, and the offer was seized with alacrity. We know that Russia, notwithstanding the baseless hopes of some, delivered absolutely nothing of value to the Geneva II negotiations process. As US diplomats scrambled to put together lists of names for a transitional governing authority, Russia cynically delivered arms to its client.

Russia, in short, has not camouflaged its intentions with respect to Syria. With Iran doing the heavy lifting, Vladimir Putin has seen the Syrian crisis as a useful way to make a point he deems essential in the context of Russia’s supposed revival as a great power: when Russia backs a client, that client—no matter his defects and depredation—survives. Yes, Foreign Minister Sergei Lavrov is a skilled and clever diplomat, someone easily capable of gulling the credulous into believing that Russia can be and wishes to be of actual assistance in attaining a just, sustainable, and peaceful political settlement to a horrific crisis. Yet in reality he has bought valuable time for his client—with the invaluable assistance of Iran—to consolidate his position and continue the reign of terror. The combination of the chemical weapons agreement and the Geneva II mirage was a diplomatic tour de force.

Surely Moscow has taken note of the disparity between American rhetoric and action in the case of Syria. Telling Assad to step aside, recognizing the Syrian National Coalition as the legitimate representative of the Syrian people, and drawing a red line on the use of chemical weaponry all involved presidential statements unaccompanied by appropriate action. The step aside dictum of August 2011 was neutralized a year later by a decision not to arm and equip nationalist rebels in a meaningful way. The legitimate representative verbiage was filler for a conference, not the starting pistol for creation of an alternate government in Syria. The red line was crossed by a murderous regime at least a dozen times before it did something too big to be swept under the rug. And then there was the sad spectacle of a clarion call for humanitarian military action by the secretary of state followed by an agonizing back-down ended only by Russia’s tossing of a lifeline and the president’s grasping of it. Even now the Assad regime plays with the timing and content of the chemical weapons agreement, and does so with shameless, confident impunity.

Equally instructive to Moscow has been the manner in which the president and other senior officials have characterized the nature of the crisis in Syria. Russia is arming the Assad regime and Iran is providing it with foreign fighters for one purpose precisely: to enable their client to win a military victory. When US officials—echoed by Western European counterparts—incessantly chant that there is no military solution to the Syrian crisis, who are they trying to convince? What is the point of the incantation? For those who aim for a military victory—which they may well define as the preservation of the Assad regime in that part of Syria they deem to be important—it is profoundly reassuring to know that the West will do nothing substantial to arm, train, and equip nationalist forces and will thereby leave vulnerable Syrian populations defenseless in the face of their client’s strategy of mass terror.

Again, it may not be the case that Putin’s lunge for Crimea and his designs on Ukraine more generally have been inspired by conclusions he has drawn in the context of Syria. Indeed, he might well be doing what he is doing in Ukraine now even if there had been an operational connection between American rhetoric and action in Syria. Perhaps the most that can be said with confidence is that surely there has been nothing—absolutely nothing—in America’s Syria crisis performance that would give Mr. Putin pause as he calculates the efficacy of military intervention in Europe.

No reasonable person who experienced the Cold War in its various manifestations longs for a return to that era. And even during that long, twilight struggle there were times when Washington and Moscow were able diplomatically to mitigate the threat of nuclear exchanges and dampen regional conflicts. By the same token, however, it may not be useful for American leaders to think and to say that the twenty-first century marks a radical departure from everything preceding it in terms of international relations, and to make statements aimed at assuring the bullies of this world that their interests will be respected and that they should not consider the United States to be a competitor, much less an adversary.

Vladimir Putin and the clique running Russia constitute a threat to the peace. Acceptance of this fact does not mandate American military intervention in Ukraine, boots on the ground in Syria, or unilateralism of any kind. Indeed, the importance of reinvigorating NATO and the Atlantic alliance is manifest. Putin and his colleagues consider the collapse of the Soviet Union to have been tragic; an understandable belief by graduates of a corrupt, exploitative system who continue to exploit for personal gain and who long to restore Russia to superpower status. Their actions beyond the borders of the Russian Federation are consistent with their Soviet pedigree.

The Obama administration has an opportunity now—perhaps through the medium of a Syria Study Group—to reexamine the basics of its Syria policy without the illusion of Putin’s Russia pulling its chestnuts from the fire. More broadly, however, the Ukrainian crisis offers a decent, thoughtful, and conciliatory US president an opportunity to see the twenty-first century as it really is: no different from the twentieth, the nineteenth, or the countless centuries preceding them in terms of truly bad and truly dangerous people inclined to interpret restraint as weakness, and willing to use military force to challenge international norms and achieve unworthy objectives. As JFK discovered in 1961, sweet reason does not trump brute force.

Image: Russian President Vladimir Putin chairs a Russian government meeting in the Novo-Ogaryovo residence outside Moscow March 5, 2014. Putin said on Wednesday he did not want political tension to detract from economic cooperation with Russia's "traditional partners", signalling he hopes to avoid spillover from a bitter dispute with the West over Ukraine. (Photo: REUTERS/Alexei Druzhinin/RIA Novosti/Kremlin)