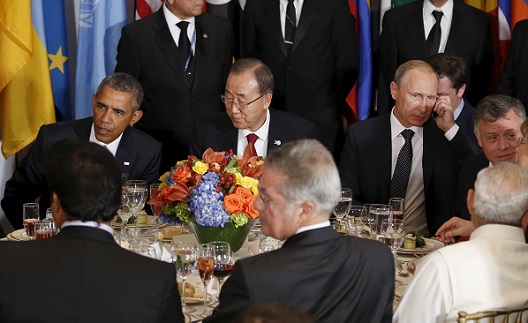 Fans of television interviewer Charlie Rose have long known not to be surprised when Mr. Rose manages, in a flawlessly professional manner, to elicit intelligence on the essence of his guest’s character. He did it again in his recent interview of Russian President Vladimir Putin. Consider the following exchange:

Charlie Rose: “I come back to the problem that many people look at. And they believe that Assad helps ISIS. That his reprehensible conduct against the Syrian people using barrel bombs and worse is a recruiting tool for ISIS and that if he was removed, transitioned, at some point, it would be better in the fight against ISIS, al-Nusra and others.”

President Putin: “Well, speaking in a professional language of intelligence services I can tell you that this kind of assessment is an ‘active measure’ by enemies of Assad. It is anti-Syrian propaganda.”

In fairness to Putin, it is not clear what aspect of the “assessment” he was deeming an “active measure”: data concerning the existence and use of barrel bombs (denied altogether by his client, Bashar al-Assad); the role of barrel bombing and other regime collective punishment atrocities as recruiting assets for the Islamic State (ISIL or ISIS); or the suggestion that a transition away from brutal, corrupt, and incompetent family rule is essential to win the battle against violent extremism in Syria.

Active measure means something quite specific to Putin as a former KGB operative. In a 2000 CNN interview with retired KGB Maj. Gen. Oleg Kalugin, he described active measures as “the heart and soul of Soviet intelligence… Not intelligence collection, but subversion: active measures to weaken the West, to drive wedges in the Western community alliances of all sorts, particularly NATO, to sow discord among allies, to weaken the United States in the eyes of the people of Europe, Asia, Africa, Latin America, and thus to prepare ground in case the war really occurs.”

Presumably, Putin will not deny the existence of barrel bombing (unlike his client). Russia has, after all, voted “yes” to United Nations Security Council Resolution 2139, which among other things, “Demands that all parties immediately cease all attacks against civilians, as well as the indiscriminate employment of weapons in populated areas, including shelling and aerial bombardment, such as the use of barrel bombs.” That which Putin seems to find objectionable is the use to which his client’s war crimes are being put in a political sense: as an argument for political transition away from a regime that has alienated millions of Syrians and has made vast tracts of the country safe for ISIL.

By declining to refute Charlie Rose’s point and instead labeling criticism of his client’s conduct as a politically motivated intelligence manipulation, Putin confirmed another facet of what he would dismiss as an active measure: that he has no problem at all with the barrel bombing of civilian residential neighborhoods. No doubt, he appreciates the strategic aim of civilian terror: to prevent the rise of any non-ISIL governance alternative to the Assad regime. He would not likely deny, at least privately, the recruiting use to which ISIL puts regime depredations. With ISIL serving as his client’s ticket back to polite society, how could he object?

This is more than unfortunate. When Assad oversaw the chemical attack on August 21, 2013 that resulted in the deaths of some 1,400 Syrian civilians, Putin scrambled to preempt the all-but-inevitable US military response by facilitating an agreement to remove much of the regime’s chemical warfare capability. He did so while denying his client had done anything. Were he faced with a similar prospect—limited military countermeasures to protect Syrian civilians from barrel bombs—he and his Iranian partners might prevail on their client to stop voluntarily, thereby savings lives and perhaps stemming refugee flows. But he faces no such prospect. He is therefore free to facilitate war crimes while dismissing objections to them as “active measure” manipulation.

Vladimir Putin knows exactly what he is doing. He sees a refugee crisis affecting Western Europe, an ill-conceived train-and-equip initiative dissolving into fiasco, and a Washington-Ankara “ISIL-free zone” in northern Syria going nowhere. He sees an opportunity to rehabilitate his client in the name of fighting ISIL. His Iranian partner has delivered Iraq to an “intelligence sharing” venture involving Moscow, Tehran, and Assad—a move unlikely to produce anything new in the way of intelligence. Its purpose is to put meat on the bones of Putin’s assertion that only through existing governments, including the Damascus-based Assad family business, can ISIL be fought.

Putin will push until he hits resistance. Only when he understands that the West—or at least the United States—will take limited military countermeasures to protect Syrian civilians from Assad’s ISIL-promoting atrocities will he take a step back. He probably thinks he has nothing to worry about on that score. He may well be correct. He seems to regard the “active measures” allegedly aimed at his client with a mixture of contempt and humor.