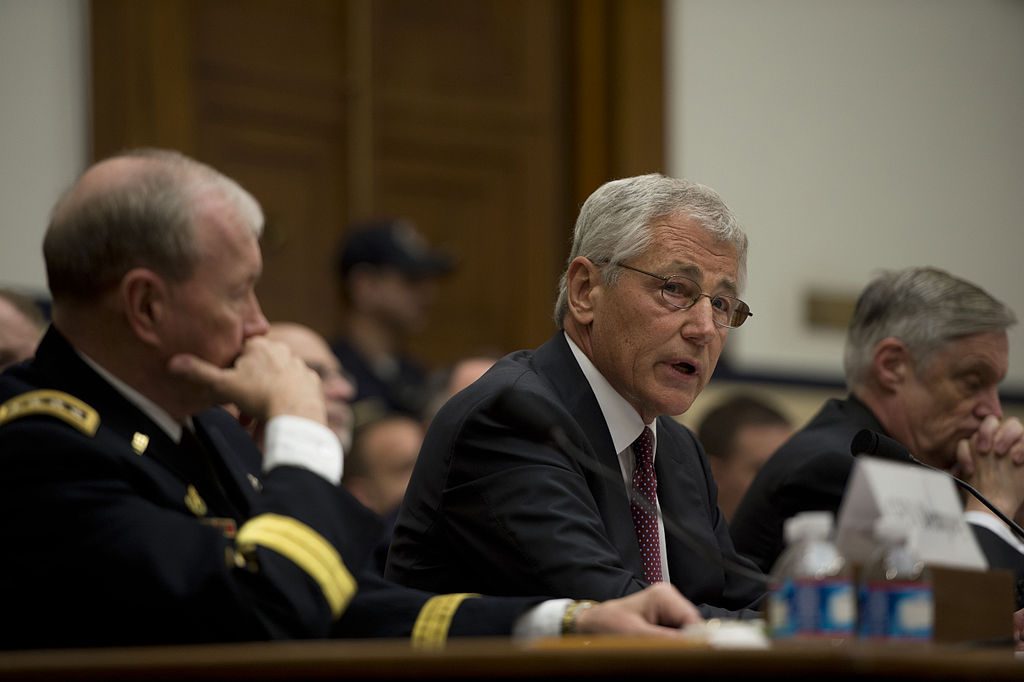 Recent testimony by US Secretary of Defense Chuck Hagel and Chairman of the Joint Chiefs of Staff General Martin Dempsey illustrated quite nicely one outcome of a troubled interagency national security system: US senators seemed to be more perplexed about American policy toward Syria after the hearing than they were before.

It would be tempting to skewer the Pentagon chiefs over Senate Armed Services Committee testimony that reflected anything but clarity and purpose: a temptation well worth resisting. True, US Secretary of State John Kerry did much better in defining US policy and the nature of the Syria problem in parallel testimony before the Senate Foreign Relations Committee. Yet a Pentagon reflecting confusion is a Pentagon in need of clear guidance from the commander in chief, US President Barack Obama.

The central purpose of the defense secretary and the chairman was to pour cold water on the idea of military intervention in Syria. Leaving aside the fact that the theme itself is sweet music to the ears of Syrian President Bashar al-Assad, the arguments advanced by the two were unclear and unconvincing. No doubt this is attributable in part to a national security system that still resists setting clear objectives and thinking strategically, leaving senior officials stranded somewhere in between defending the indefensible and just making things up. Partly it reflects reluctance on the part of legislative and executive branch seniors alike to define what they are talking about.

US military intervention in Syria could take many different forms. Indeed, one end of the spectrum has been breached. By providing rations and medical kits to soldiers who both eat and bleed, and who need food and bandages to fight and win, the Obama administration has already intervened militarily in Syria. Indeed, over the weekend Kerry announced a doubling of nonlethal assistance, all to be very helpfully funneled through the opposition’s Supreme Military Council, which is working to keep the Syrian revolution in the hands of Syrian nationalists as opposed to jihadists lured to Syria by Assad’s sectarian strategy.

A next stop along the spectrum might be arming and training rebel forces. Dempsey said he would support arming the resistance, “if we could clearly identify the right people.” This was a curious statement. Have the right people not been identified to receive the kinds of nonlethal assistance that keep soldiers alive and on the march? Or is the United States feeding the Nusra Front and binding the wounds of Ahrar Esh-Sham (a loosely-organized Salafist group established in late 2011)? Press reports suggest the United States is already training armed rebels. If true, do we not know who we are training? Indeed, if true another milestone of American military intervention in the Syrian conflict has been reached. In his parallel testimony Kerry stated the obvious: of course the United States knows who it is supporting. Perhaps Dempsey’s central point—qualified only by the end-use reservation—was that he still disagrees with the president on the question of arming the rebels.

A third (or fourth if training has begun) point along the military intervention spectrum might involve the elimination of regime military air and missile assets on the ground by stand-off weaponry, something the chairman suggested was doable. A half-step beyond would be to aim for the same result, but by employing manned aircraft inside Syrian airspace instead. Either step would produce the result aimed for by a no-fly zone.

A fourth and rather complicated way station toward deeper military commitment would involve a conventional no-fly zone, either by persuading NATO to convert the Patriot batteries now serving as part of Turkey’s air defenses to another purpose entirely, or by suppressing Syria’s air defenses through sustained bombing and then maintaining a 24/7 combat air patrol over or adjacent to Syrian skies.

A fifth form of US military intervention could entail the insertion of ground forces. In Syria, there is no point even to consider this option. To the extent it is being mooted (as Dempsey indicated) in the context of securing loose chemical and biological stocks, it should be reconsidered. Would it not be possible to train and fund others to accomplish this task? It seems remarkable that relatively noninvasive steps that could solve specific problems and perhaps even demoralize the regime seem beyond the pale, while the one thing well worth avoiding seems to get active consideration. No American boots should encounter Syrian soil, period: a proposition worth rethinking only under the most permissive of conditions.

All five of the above stages were conflated during much of the Hagel-Dempsey testimony, thereby enabling the two witnesses to say some remarkable things. According to the secretary, military intervention would “hinder humanitarian operations,” “embroil the United States in a significant, lengthy, and uncertain military commitment,” strain key partnerships because “no international or regional consensus” exists, and drag the United States “into a broader regional conflict or a proxy war.” What makes this kind of argumentation remotely possible is conflation: making the stand-off removal of Assad’s air and missile assets the same thing as the 82nd Airborne Division floating down into central Damascus. In this testimony terms such as “military intervention” and “use of force” simply went undefined.

Dempsey, for example, offered the following: “The use of force, especially in circumstances where ethnic and religious factors dominate, is unlikely to produce predictable outcomes…unintended consequences are the rule with military interventions of this sort…I do not see that the introduction of military force would produce the outcome that we seek.”  Fine: how precisely would force be used? Military interventions of what nature exactly? No refinement beyond the general proposition was offered.

Suppose, for example, the president were to conclude that regime air and missile terror attacks against defenseless civilians must stop. Suppose elements of the US Navy and Air Force were to destroy the forces implementing Assad’s terror campaign: a campaign targeting all categories of noncombatants with fine impartiality, killing thousands while sending tens of thousands fleeing for their lives. Here is one fearless prediction: Syrian fixed and rotary winged aircraft and Scud missiles will no longer be in the business of killing, maiming, terrorizing, and stampeding civilians. Is this an outcome worth seeking? Are there issues of ethnicity and sect that would lower the predictability of the outcome?

Dempsey then alluded to the supposed inevitability of escalation, and noted that 90 percent of the deaths in Syria are caused by artillery fire, as if to say, “as soon as I’m done with the air and missile forces you’ll want me to go after the artillery; and once I’m finished with the cannons and their crews you’ll ask me to occupy the whole country.” This, of course, is the familiar slippery slope argument: do anything at all and you are committed to doing everything. It may be that the chairman simply wants to protect US armed forces from the consequences of a national security apparatus he does not fully trust. Surely he also has his eyes on Afghanistan and Iran-related requirements. Yet something must be asserted in plain language: in setting an objective and defining a strategy, limits can be set and enforced. In the example cited above, regime military air and missile assets can be erased. Yes, regime artillery will be a continuing factor. We can tell the Free Syrian Army where it is located. And if a demonstration of American lethality somehow inspires a regime shorn of aircraft and missiles to secure the military victory that has eluded it to date, Dempsey’s point about unintended consequences will have been sustained.

George Orwell noted, “In our time political speech and writing are largely the defense of the indefensible.”  Two superb public servants recently gave the Senate Armed Services Committee a fine example of what Orwell had in mind.