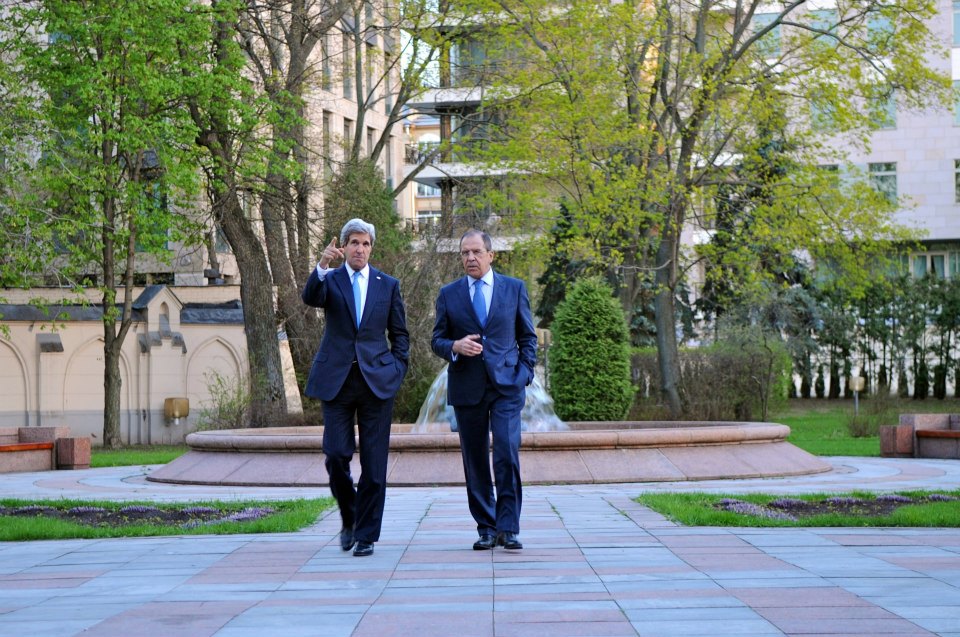 US Secretary of State John Kerry’s visit to Moscow produced a surprising result: a US-Russian agreement to convene an international conference as soon as this month, one that would “bring representatives of the [Syrian] government and the opposition together” to determine how to implement the Syrian political transition agreement reached at Geneva on June 30, 2012 by the five permanent members of the United Nations Security Council. What was particularly surprising—and pleasantly so if true—was Kerry’s observation that Washington and Moscow have a “very similar” understanding of what was actually agreed nearly a year ago in Geneva.

Yet this initiative will go nowhere unless the regime of Syrian President Bashar al-Assad stops killing and terrorizing civilians residing beyond its jurisdiction. It can and should stop these atrocities immediately if it has any interest at all in a negotiated political transition.

As noted in a previous Viewpoint article, last year’s Geneva agreement aimed for one specific result: a transitional governing mechanism formed by mutual consent in negotiations between the Syrian government and the Syrian opposition; a new government that would exercise full executive powers. Thanks to the mutual consent clause the only way Assad or members of his regime (meaning the family and its enforcers) could participate in Syria’s new government would be if the opposition agreed to their participation. The chances of such agreement? Zero.

Still, last year’s Geneva Final Communiqué did not demand that Assad step down as president of Syria as a precondition for negotiations. Neither did it single out the identity of anyone whose participation in the future governance of Syria was deemed inadmissible. The composition of a transitional unity government would be exclusively the province of Syrian negotiators. In the months following the Geneva agreement this point was sometimes garbled by White House spokespeople, who perhaps saw the virtual certainty of regime change at the end of the negotiating process as a mandate for Assad to step aside in advance of the proceedings.

In his press conference with Russian Foreign Minister Sergei Lavrov, Kerry referred to this matter in the context of “very similar” Washington-Moscow views of what the Geneva agreement says and means, noting “there’s actually more agreement even though our position has been that it’s impossible for me as an individual to understand how Syria could possibly be governed” by those who have committed outrages against the Syrian people. Kerry is right: there is no way the regime can survive a negotiating process based on mutual consent. Still, there is no precondition referring to Assad or his status.

Is it accurate then to deem the Kerry-Lavrov conference understanding a breakthrough? Clearly it is way too premature to regard it as such. Indeed, the obstacles seem daunting.

It is one thing for the Syrian Opposition Coalition to declare its readiness for a negotiated settlement (as it recently did in Istanbul), but something else entirely to form a negotiating team enjoying legitimacy in the eyes of armed and unarmed Syrian nationalists opposing the regime. The opposition of the Nusra Front and other jihadists to a negotiated political transition, presumably one that would preserve the Syrian state and much of its governing institutions, can be taken for granted. But the real challenge for the mainstream, nationalist opposition will be to build a team and agree on negotiating objectives that will pass muster with those of their fellow citizens who have borne the brunt of the regime’s murderous assaults inside Syria. Had the mainstream opposition already formed a functioning government on Syrian territory the task would have been infinitely easier. Now it must exercise effective leadership from Cairo: far from an ideal situation. With strong American support it should establish itself as a government on liberated Syrian soil quickly.

If the burden on the United States and other members of the Friends of the Syrian People group is heavy in terms of helping the mainstream, nationalist opposition field a legitimate and effective negotiating team, Russia’s task in getting its client to the table will be even heavier.

Assad has put himself in the hands of Iran and Hezbollah. The upside for the regime is that these foreign fighters are producing decent tactical results. The downside is that they would not be amused were Syrian government negotiators permitted to follow the Geneva formula to its logical end. It is only through the perpetuation of the Assad regime that Iran can reliably sustain Hezbollah in Lebanon. As for the regime itself, there is no evidence that the ruling family has tired of inflicting itself upon the country. Yet even if Assad were to decide that only complete political transition in accordance with the terms of Geneva could save Syria, he would still have to deal with Iranians and their Lebanese followers currently fighting and dying to prop up his regime for their ends. For the moment, however, it appears that Assad thinks he is winning. He may well thank Russian visitors for their interest in world peace and tell them to get lost. This assumes, of course, that Moscow will make a genuine effort to deliver the regime to its own transition: hardly a safe assumption.

For the Kerry-Lavrov agreement to result in a breakthrough two things must happen inside Syria. First, Assad’s calculation with regard to a negotiated political transition must change fundamentally. This is the bedrock premise of the strategy Kerry has persuaded the US administration to adopt. Second, the regime’s terror campaign against civilians must end. There is simply no way negotiations can start or proceed in good faith as long as regime artillery, aircraft, and missiles slaughter noncombatants in their homes and as long as regime operatives conduct massacres against defenseless civilians. No one expects the regime to lay down its arms and apologize to one and all for its lawlessness. But its strategy of acting in tandem with jihadists to make this a war of sectarian terror must be abandoned if negotiations are to begin and succeed. There is no evidence that Assad wishes to end his deadly dance with al-Qaeda: he sees it as a vital ingredient of his eventual political salvation. He desperately wants the Nusra Front and other jihadist elements to be seen as the sum total of those opposing him, and he is acting quite deliberately and cynically to bring it about, jeopardizing the stability of the entire region in the process.

It is for this reason that US administration planning to throw a kinetic spanner into Assad’s killing machine must in no way be slowed down or sidetracked by the Kerry-Lavrov understanding. There is no problem with US President Barack Obama wanting a negotiated end to the Syrian nightmare. There is nothing wrong with seeking Russian assistance in making it happen. And yes, there is nothing risk-free about using military means to cripple or at least hinder the regime’s ability to kill, maim, terrorize, and stampede tens of thousands of people with relative ease. Those whose reluctance to act is summarized by the words “first tell me how this will end” might do well to take into account the reality staring us in the face right now: to paraphrase John Kerry in Moscow, a Syria in danger of breaking apart, replete with sectarian slaughter and cleansing, destabilizing the region, and offending the conscience of mankind. This is the reality we face as long as the Assad regime has the tools and the intent to do its worst with minimal effort.

Kerry deserves credit for trying to revive the prospect of a peaceful, stable, and managed political transition in Syria. The Syrian opposition should applaud the effort and cooperate fully with it. Yet for this initiative to go anywhere, the Assad regime must show evidence of a changed calculation. It should take no more than a day or two to see if the terror attacks and massacres have stopped. If the regime decides, at long last, to become Syrian and leave the sectarianism to the Nusra Front and like-minded primitives, Kerry may yet raise Geneva from the dead. If he sets Syria on the path to a negotiated settlement, 23 million Syrians and many others will be in his debt. But the odds against him are very, very long.

Frederic C. Hof is a senior fellow of the Rafik Hariri Center for the Middle East at the Atlantic Council and the former special advisor for transition in Syria at the US Department of State. Photo credit.