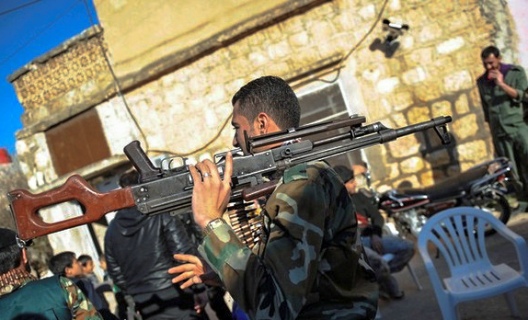 The prevailing attitude toward Geneva inside Syria underscores a central reality of the conference and one that could be easily overshadowed by the frantic diplomacy of recent weeks: even if the talks could miraculously produce their goal of forming transitional government, another miracle altogether would be required in order to implement any settlement on the ground. In the far more likely event that the talks fail, Western-backed moderates who endorsed the talks—specifically the SNC and the Free Syrian Army (FSA)’s Supreme Military Council (SMC)—will be stripped of what little legitimacy they retain inside Syria.

The first three days of the Geneva II talks have elicited skepticism and sometimes vitriol from citizens and armed groups inside Syria, who fear that the opposition Syrian National Coalition (SNC) will compromise the revolution’s goals while receiving little in return. “The Coalition is a tool, nothing more,” said one twenty-five year-old Christian activist from Damascus. “It belongs to and is funded by Saudi Arabia.” When asked what he expected to emerge from Geneva II, he responded: “Arrangements for Geneva III.”

Influential armed factions inside Syria have been similarly blunt in dismissing the conference. Zahran Aloush, the military chief of the Islamic Front—a coalition of seven hardline Islamist groups, and Syria’s most powerful rebel formation—earlier this month went as far as threatening to place Geneva’s participants on a “wanted list” for targeting. Hassan Abboud, another Islamic Front leader, on Thursday night likened SNC head Ahmed Jarba to the British politician credited with gifting the land of Palestine to the state of Israel: “Jarba negotiating at Geneva is like Arthur Balfour—giving away what doesn’t belong to him.”

The armed opposition’s most detailed renunciation of Geneva came Monday, with the release of a joint statement from the Islamic Front and two other armed coalitions, Jaysh al-Mujahideen and the Islamic Union of Soldiers of the Levant. The statement insists that “the Syrian people will not be satisfied by any one group attending Geneva II on their behalf, bringing with them a series of concessions and retreats rather than defending our legitimate human rights and demands,” alluding to the Syrian National Coalition. (The translated statement is available here.)

Despite this widespread animus, Salim Idriss, head of the Western-backed SMC, has endorsed the talks, provided that the opposition delegation “adhere to the goals of Syrian revolution, chief among them expelling Assad and his clique.” It remains to be seen, however, just how meaningful Idriss’s buy-in will be. FSA fighters have been increasingly marginalized on the ground, with the Islamic Front emerging as the dominant power; the Islamic Front’s seizure in December of the Bab al-Hawa border crossing and FSA storehouses starkly illustrated the extent to which the new Islamist coalition can impose its will on weaker, more moderate groups.

Washington halted its flow of nonlethal aid to moderate rebels following the Bab al-Hawa incident, but has reportedly sought to bolster moderate groups fighting to evict the al-Qaeda affiliated Islamic State of Iraq and a-Sham (ISIS) from northern Syria by providing them with nonlethal aid and millions of dollars in cash. The United States even supported an increase in the flow of weapons from Saudi Arabia and Qatar.

While this aid could conceivably empower FSA-aligned groups to reestablish themselves among Syria’s armed opposition, it will not rise to the level required to shift the balance of power among Syria’s rebels. What is more, the current levels of cooperation between FSA groups and other, less moderate formations—among them the Islamic Front and, to a lesser extent, Jabhat a-Nusra—mean that this aid is unlikely to remain solely in the hands of those groups for which it was intended. It remains doubtful, therefore, that the SMC could wield the clout necessary to translate any decisions taken in Switzerland onto the ground in Syria; a more likely scenario would be for the group’s endorsement to further erode its long-waning legitimacy within Syria.

Of course, any discussion of implementing Geneva II requires a certain suspension of disbelief, relying as it does on the vanishingly remote possibility that an agreement could emerge from a peace conference whose basic premise—the establishment of a transitional government based on mutual consent—is explicitly rejected by one of the two protagonists. Assad himself recently derided the notion of sharing power with the opposition as “a good joke.”

Yet popular resentment toward Geneva will be no less relevant in the likely event that the talks fail. Hardline groups like the Islamic Front will be vindicated, and the Western-backed parties that have staked their dwindling credibility on the conference will be further marginalized.

In view of these dynamics, Geneva II’s architects must proceed based on a clear-eyed assessment both of their waning ability to influence dynamics among Syria’s armed opposition and of the conference’s infinitesimal chances for achieving its ultimate goal of a forming transitional governing body. Washington and its allies should set their sights on more attainable short-term goals, including the establishment humanitarian corridors into blockaded areas and the implementation local ceasefires in those areas where opposition forces are willing to abide by them.

Although some have made the case that Geneva II must remain focused squarely on the goal of removing Assad from power, lest the conference lose sight of its purpose and further legitimize the Syrian regime, a more immediate concern is that the conference’s failure to realize this central goal will undermine the prospects for future diplomacy. If, however, Geneva can register some limited but concrete achievements that alleviate the suffering of Syrians’ on the ground, it could lay the groundwork for greater popular backing of diplomatic initiatives down the road (not to mention the immediate humanitarian benefits).

That said, even limited concessions will be difficult to extract, particularly with Iran absent from the conference and likely to play a spoiler role. At the very least, however, the recent revelations regarding the regime’s practices in Syria—chief among them the leaked report detailing photographs that reveal the regime’s systematic torture and execution of some 11,000 detainees—should provide the Coalition and its backers with some amount of leverage vis-à-vis the Syrian government and Russia.

It may ultimately prove the case that diplomacy will remain fruitless unless it is backed by the threat of force, as in the case of the chemical weapons deal and as Ambassador Frederic Hof has suggested. This, of course, is another discussion entirely—one that would require a departure from Washington’s single-minded focus on brokering a political solution to what remains a decidedly military affair.