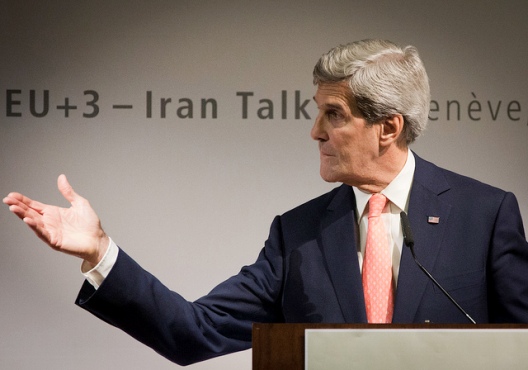 The recent furor over the aborted United Nations invitation of Iran to the Geneva 2 conference on Syria, convening today in Montreux, Switzerland, provided a comic opera distraction from a central reality: the role of Iran in the survival of Syria’s Assad regime is absolutely vital. For reasons of its own national security objectives and priorities, Iran has no interest whatsoever in facilitating the political transition mission of Geneva 2. Yet it may find putting pressure on the Assad regime to avoid war crimes and crimes against humanity to be in its national interest.

Iran is the 800 pound gorilla in Syria. Lebanese and Iraqi foreign fighters brought to Syria by Iran turned the tide of battle in the regime’s favor in 2013. Officers and soldiers of the Iranian Revolutionary Guard Corps and its elite Quds Force have provided expert operational advice to regime security forces and, with the aid of the foreign fighters Iran has introduced, have helped the regime build Syrian paramilitary forces that have relieved pressure on regular forces stretched thin. Iran’s air and ground military logistical bridge to the regime over and through Iraq has been essential. In assuming the centrality of Moscow to the issue of political transition in Syria, the United States has relentlessly pursued a peripheral player. The correct address for matters involving the survival of the Assad regime is Tehran.

Recent discussions with private, prominent Iranians close to President Rohani and Foreign Minister Zarif reflect confidence that Iran has prevailed in Syria, and pride that their country has projected its power and defended its interests in a very systematic, competent manner. These Iranians have no illusions about the statesmanship of Bashar al-Assad: they see him as a useful tool, not a worthy leader or a close friend. They do not boast about having bested the United States. They see Saudi Arabia as their enemy and perceive that the Islamic Republic’s traditional key adversaries (Israel and the United States) have not played much of a role affecting matters inside Syria.

From Iran’s national security perspective the threat of an Israeli aerial campaign against its nuclear facilities is paramount. Iran’s first line of defense is its Hezbollah missile and rocket deterrent and retaliatory force in southern Lebanon. Keeping that force in a high state of operational readiness is essential for Iran. Tehran very much wants Israel to count on missiles and rockets impacting on Israeli towns, cities, and military facilities from nearby Lebanon if Israeli bombs start falling in Iran. Tehran sees the Assad regime as essential to maintaining the requisite readiness level of its Lebanese deterrent force. Iran sees any replacement of the regime as inferior to the real thing. Tehran believes that no one other than Bashar al-Assad can be counted on to subordinate Syria totally to Iran in this connection; no one else would so enthusiastically and reliably put Syria at Iran’s disposal for the transfer of weaponry and military equipment to Hezbollah in Lebanon.

If these prominent Iranians are accurate in their appraisal of Bashar al-Assad’s place in the constellation of Iranian national security interests, one may conclude that Tehran will be an implacable foe of political transition in Syria for at least as long as it perceives a palpable military threat from Israel. It is not that Tehran has a sentimental or affectionate attachment to Assad. This is business. Business is being conducted in a hard-headed, unapologetic, no nonsense manner. No doubt Iran wishes Bashar al-Assad had better leadership and political-diplomatic skills. No doubt Tehran wishes it had a Syrian junior partner less addicted to war crimes and crimes against humanity. But Iran’s cold calculation is that nothing improves on the Assad regime when it comes to keeping its strategic forces in Lebanon fit to fight, and nothing improves on Bashar al-Assad himself as the embodiment of the legitimacy the regime enjoys among its Syrian supporters.

Would Tehran’s attitude toward a Syrian political transition change were the threat of Israeli military strikes to evaporate in the wake of a permanent nuclear agreement, one deemed attractive by Israel? Surely Iran would want to maintain a strong position in Syria anyway; surely it would want Damascus to remain a reliable ally. Tehran would certainly continue to support Hezbollah politically even under the rosy scenarios of gradual Israeli-Iranian detente and a relaxation of Lebanon-Israel tensions. Yet absent the clear and present danger of crippling Israeli air strikes dictating support for the political survival of otherwise corruptly inept clan rule in Syria, Iran might come to see its interests in Syria better protected by more decent, modern governance in Syria.

Again, it is far from certain that Iran would become a force for political transition in Syria even in the unlikely event of Iranian-Israeli detente. What seems to be certain is that it will, without reservation, support the survival of the Assad regime so long as it perceives the threat from Israel as real and even imminent. Assuming, therefore, that it would take months for any permanent nuclear agreement to be finalized and additional time for Tehran to evaluate Israel’s reaction to it, is there anything at all Iran can do to mitigate the worst aspects of its client’s impact on Syria and the surrounding neighborhood? Would it have any reason at all for wishing to do so?

Senior Iranian non-governmental contacts have indicated interest in the idea that their government might play a role in facilitating desperately needed humanitarian relief, including aid for civilians subjected to relentless regime artillery and air strikes and starvation-by-siege operations. Clearly these interlocutors were uncomfortable with the Syrian regime’s tactics. Yet among themselves there were differing perspectives about the military necessity of shelling and bombing residential areas thought to contain rebel fighters. There were also reservations articulated about the practical aspects of compelling changes in regime behavior and the details of actual arrangements on the ground that would implement (for example) unhindered United Nations humanitarian access to suffering populations. Indeed, distrust of the United Nations was evident. Yet these Iranian contacts acknowledged that what is happening in Syria is catastrophic and uncivilized, an outlook perhaps enhanced by recent photographic evidence seeming to document the regime’s brutal mistreatment and murder of prisoners. They expressed interest in the possibility of official Iran-United States discussions aimed at bringing relief.

None of this is to suggest the discovery of a diplomatic silver bullet that could end the worst and most gratuitous aspects of Syria’s unspeakable agony. Yet is there a possibility worth exploring at official Iranian-American levels? Surely there is. Tehran believes it is in the driver’s seat in Syria. Its likely default option with regard to the humanitarian abomination would be to do nothing about it. After all, its junior partner is serving Iran’s transcendent, Hezbollah-related national security purpose. Why rock the boat? If Tehran truly saw something repulsive in the behavior of the Assad regime, why would discussions with the United States be necessary to motivate action? Surely Iranian advisors on the ground in Syria are intimately aware of regime practices. Yet direct communication between US and Iranian officials on the humanitarian abomination in Syria would appear to be justified.

Perhaps the United States and Iran should both consider the potential impact of ongoing regime atrocities in Syria on other aspects of their emerging bilateral relationship. For example: is it literally impossible that the Assad regime might behave so grotesquely so as to revive the credible threat of US military strikes in response to undisguised, world-opinion-be-damned barbarism? Is there literally nothing, short of chemical atrocities, that would motivate the current US president to revisit that which he abandoned in September 2013 in return for a chemical weapons agreement? What if, during the course of 2014, President Barack Obama feels compelled by Assad regime depredations to neutralize regime artillery, aircraft, missile, and rocket assets in response to something so horrible and so visible that it meets his criteria for military action? Is it certain that he will continue to avert his gaze under all circumstances? And if he strikes, what would be the effect on, for example, nuclear talks?

No doubt Tehran’s calculation with regard to pressuring its client to quit human rights worst practices and stop producing genocidal-like effects will be affected by several considerations. In Iran’s view, does Assad’s political survival depend on prosecuting a campaign of mass terror? Is the nuclear initiative serious and worth protecting from potential Syria spillover? Beyond the saving of lives and the reduction of human misery, is there anything to be gained by reining-in a murderous client and undertaking discussions with the United States to that end?

For Washington there are questions as well. Will the prospect of a nuclear agreement with Iran now join with the chemical weapons agreement as a self-imposed bar to reacting militarily in response to particularly horrible Assad regime atrocities? If the Obama administration believes Iran would terminate nuclear discussions in the wake of American strikes, what does that suggest about Tehran’s actual interest in a nuclear deal? If Iran proves willing to continue tolerating regime atrocities as a cost of doing business in Syria, what would that suggest about the prospect for reaching any kind of sustainable accommodation with Tehran on nuclear matters or any other issue?

If recent conversations with senior, non-governmental Iranians accurately reflect the consensus views of important Iranian officials, civilian and military, then there would appear to be scope for official Iranian-US contacts on Syria’s humanitarian catastrophe. Iran’s view is that it has won the battle for the survival of the Assad regime. If the Islamic Republic is interested in saving lives that would otherwise be extinguished needlessly, it has the capacity to do so. Even devoid of humanitarian sentiments, however, Tehran might do well to consider the negative implications of its client’s behavior on the full range of Iranian national security interests.