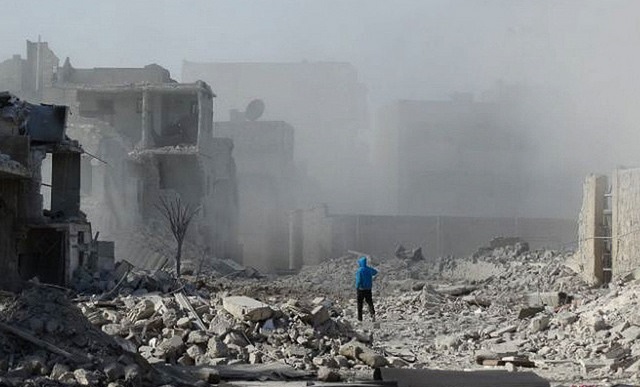 The complexity of Syria’s ongoing crisis and confusion over what to do about it should not obscure the choice facing the United States, its allies and its partners.

Washington can either accede to an Iranian-orchestrated military victory for Bashar Assad’s regime in western Syria and to the rise of Al-Qaeda-affiliated gangs elsewhere, or help Syrians undo that victory, neutralize Al-Qaeda and shape Syria’s political future. The illusory option of seeking a negotiated political compromise died in January in Geneva. It died precisely because the Syrian regime believed it had prevailed militarily thanks to Iran and Russia. For diplomacy ever to have a chance that belief must be undone.

Iran’s aim is to secure its client in that part of Syria that matters to Tehran: areas close to Lebanon and adjoining the Mediterranean Sea. Iran considers Hezbollah’s missile and rocket forces in Lebanon as its first line of confrontation against Israel, and it sees Assad as the essential cog in its efforts to keep Hezbollah’s strategic forces fit to fight. For Tehran Assad is irreplaceable. He has, over the years, proven his willingness to subordinate Syria to Iran on Hezbollah. Nothing, from Iran’s perspective, improves on the real thing.

Iran has moved effectively to rescue Assad from military defeat. It brought thousands of Hezbollah fighters from Lebanon to relieve Assad’s tired armed forces. It also brought militiamen from Iraq and Afghanistan. Iran’s own Qods Force has played key advisory and training roles, organizing Syrian militias to take over checkpoints and local security. Russian arms resupplies have helped sustain the regime’s artillery, aerial, rocket and missile fires on densely populated areas. Yet Iran’s assistance to the regime has been literally life-saving.

Only recently have Iranian officials spoken publicly about the results of their efforts to save Assad. With evident pride two claims are being made: Iran has secured a military victory in Syria; and Iran’s western border now touches the Mediterranean. Both claims may entail some exaggeration. Yet they reflect Tehran’s total confidence that there is nothing on the horizon that will challenge Iran’s objective of keeping its Syrian vassal ensconced in that part of Syria essential to its ability to menace Israel through Hezbollah from close range.

Iran’s investment in Assad has been enormously expensive, leading some to hope that Tehran might be interested in helping to facilitate a genuine political compromise in Syria. This is illusory. Iran has a vital national security interest in keeping Assad in his seat. That which does not interest Tehran as much is eastern Syria, where Kurds, a motley variety of well-financed Islamist extremists, and marginally effective armed Syrian nationalists vie for power and influence. As long as Tehran has (at least) the passive cooperation of Iraq in moving men, arms and equipment into Syria, and secure routes to the west, it cares not what happens in eastern Syria.

Eastern Syria has, however, attracted the attention of the U.S., its European allies and Syria’s neighbors. It is a vacuum that has attracted Al-Qaeda and others: people (including Western volunteers) interested in imposing barbaric governance on Syrians and terror operations beyond Syria.

Clearly the division of Syria between two sets of transnational terrorists using Islam to justify murder and mayhem – Iran, Hezbollah and others on one side, and Al-Qaeda mixed in with others on the other – poses a national security threat to the U.S., its allies, and all of Syria’s neighbors. One would think that the functional equivalent of doing nothing – trying to contain the uncontainable, calling for negotiations, preaching about the irrelevance of military solutions – would be unacceptable. Yet it has summarized Western policy to date.

The alternative is to try, even at this late date, to build a militarily capable force of Syrian nationalists to defend populations vulnerable to the depredations of both extremes; a force able to attack and defend in two directions. There are reports of American efforts to that end. But are they sizeable enough to make a substantial difference? Can there be an effort of sufficient size without the U.S. Defense Department taking charge? And if it does take charge, will those states asked to host a large, overt, and unapologetic arm-train-equip operation get from Washington the assurances they need that any terrorist or conventional military operations mounted against them from Syria will receive a devastating American military response?

The issues are tough. Yet the choice is clear: Accede to the division of Syria by terrorists, or make a meaningful effort empowering Syrians willing to fight for an independent Syria. Anything less than the latter will amount to adoption of the former.

Frederic C. Hof, a senior fellow at the Atlantic Council’s Rafik Hariri Center for the Middle East, was Secretary of State Hillary Clinton’s special adviser for Syria. He wrote this commentary for THE DAILY STAR, originally published May 31, 2014.