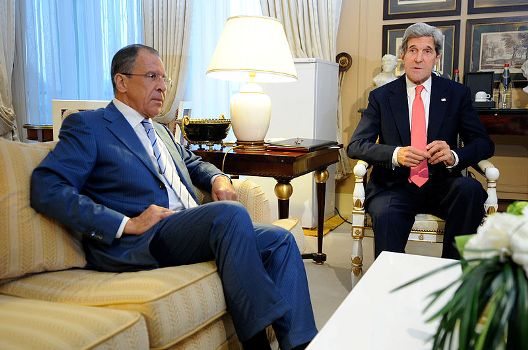 January 22, the latest in a long string of dates penciled-in for Geneva II, is six weeks from today. Hotel rooms are being booked in Montreux, Russian and Iranian ministers are meeting to plot their game plan, and the opposition Syrian National Council has agreed—under great duress and with several preconditions—to attend the peace talks.

Now that the Obama administration apparently has got the conference for which it lobbied so strenuously, what will they do with it? What should Secretary Kerry press for?

The top line priority for the United States is the removal of President Bashar al-Assad from power. This is the right goal, but a nonstarter as a negotiating position at this point. Assad, currently enjoying military supremacy, dependable material support from Russia and Iran, and militia support from Iraq and Lebanon, will not likely negotiate himself out of power (especially as the US position at the table is no longer backed by the credible threat of force). The Syrian minister of information, laudable for his concision if little else, said as much last week. “If anyone thinks we are going to Geneva II to hand over the keys to Damascus, then he might as well not go.”

If Kerry confines himself to the stated agenda of complete political transition—barely more than a fantasy in the near- and mid-term—the conference presents numerous risks for the United States and its friends. Indeed, given Moscow’s unflinching support for the Assad regime, their eagerness to move forward with the talks should give us pause. Most likely, the Syrians and Russians will gladly use the event as part of a long, drawn-out process of empty talk and as a platform to demonstrate their ostensible good faith in participation. Assad can position himself as the indispensible steward of the peace process, just as he did the chemical weapons agreement. They hope to kick the can down the road, and at the same time count on the opposition showcasing themselves as a fractured, ineffectual, unserious lot—hardly a viable alternative. Kerry risks confirming the suspicion of his skeptics: that the United States is interested merely to be seen as trying to do something, without any real strategy for success.

But there is an alternative tack. Kerry should take the opportunity presented by Geneva II to pivot and make humanitarian access the emphasis of his diplomacy. Realistically, Kerry cannot altogether abandon the agreed agenda of the conference, and he should debate in good faith a complete political transition in Damascus. But when Plan A hits the inevitable impasse he should waste no time to direct all of his energies to Plan B: unfettered humanitarian access. The move makes good sense, first and foremost for the millions of Syrians facing dire hardship, but second, for the standing of the Syrian opposition, and third, for US diplomatic tactics vis-à-vis Assad and his allies:

The humanitarian assistance situation is complex, but the starting point is straightforward: Damascus must allow unfettered cross-line and cross-border access for all international humanitarian relief agencies.

If Kerry adopts this line, unfortunately his hand will strengthen through 2014, as the war shows no indication of slowing. UN-Arab League envoy Lakhdar Brahimi has spoken of state collapse in Syria and warned of a Somalia on the Mediterranean. Increasingly, humanitarian agencies, attempting to convey the magnitude of suffering in Syria, are speaking of a Rwanda on the Mediterranean. These alarms will only amplify in the coming months as thousands suffer due to harsh winter conditions, spreading illness, malnutrition, and population displacement. Honest observers can disagree about the merits of the convening peace talks at this moment, but all should agree that if talks do proceed Kerry should take the opportunity presented by Geneva II to place the humanitarian crisis center stage and create the conditions for international action.

Matthew Hall is an assistant director with the Rafik Hariri Center for the Middle East.