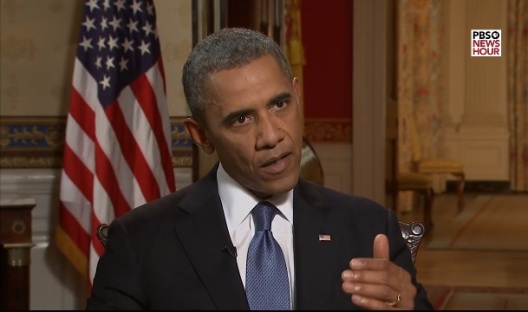 President Barack Obama sat for a PBS interview on the evening of August 28, 2013 and spoke at some length about how he is processing the situation in Syria in the wake of the previous week’s massive regime chemical attack on Syrian civilians. He argued, in essence, that the killing of tens of thousands of Syrians through the Assad regime’s use of conventional munitions does not engage US interests sufficiently so as to justify a humanitarian military response. Instead it is the regime’s use of chemical weapons, which have killed a handful in relation to the overall body count, that President Obama says may merit a “shot across the bow saying, stop doing this.”

The president argued, “We cannot see a breach of the nonproliferation norm that allows, potentially, chemical weapons to fall into the hands of all kinds of folks.” Why? Because chemical weapons are “different, and we want to make sure they are not loose in a way that could ultimately affect our security.” Put differently, President Obama said, “there is a prospect, a possibility, in which chemical weapons that can have devastating effects could be directed at us.”

By making the basis of potential American military action—the “shot across the bow”—one of nonproliferation, the president avoided having to make explicit reference to the 800 pound gorilla lurking in the Oval Office: the assault on US credibility conveyed by last week’s chemical attack. The president seems deliberately to have conflated two related, but separate issues—the use of chemical weapons versus the proliferation of those weapons—to evade the central issue. In principle—and perhaps in practice—the Syrian regime is quite capable of doing two things simultaneously: terrorizing and killing Syrians with chemical weapons and maintaining tight control over the stockpile. Use of chemical weapons in no way implies proliferation.

What threat exactly is posed to Americans in a scenario where the regime conducts a chemical campaign but controls its own arsenal? The president suggested that “by using chemical weapons on a large [emphasis added] scale against your own people… [y]ou are not only breaking international norms and standards of decency, but you’re also creating a situation where US national interests are affected, and this needs to stop.” Have not international norms and standards of decency been consistently violated by a regime neck-deep into war crimes and crimes against humanity? Is the use of a conventionally armed Scud missile against innocent civilians any less reprehensible, any less an affront (given the equities of American allies and friends in the region) to American interests, any less something that “needs to stop?” Were international laws and conventions not being shredded by the Assad regime long before it resorted to chemicals? Is the president suggesting that somehow the regime’s use of chemical weapons implies moving them into range of American cities?

Referring to past rhetorical interventions, President Obama recalled having said that “if the Assad regime used chemical weapons on his own people, that that would change some of our calculations.” In fact he called it, just over a year ago, a red line; one whose crossing would be a game changer. That line has been all-but-erased by a regime emboldened to the point where it felt free to make a frontal assault on US credibility for the edification of American allies and friends around the world. The recent powerful statement of Secretary of State John Kerry, one seeming to presage a strong military response, has been subsequently qualified by Secretary of Defense Chuck Hagel in a BBC interview and now by the president. Indeed, the president hints at a possible “shot across the bow” which is, after all, a cannon ball that flies through the air before striking water, hitting nothing at all between the muzzle and the deep blue sea.

Ideally the prospect of an intense aerial assault on regime delivery systems (artillery, aircraft, missiles, rockets, support systems) used to kill and terrify the multitudes, through ordnance both chemical and conventional in nature, would persuade Russia and the regime to institute a unilateral ceasefire, call for UN observers, and implement Kofi Annan’s six-point deescalatory plan. As unlikely as it is that something so sensible would come to pass, it would—if Moscow and its client had any sense, any humanity at all—create a basis for Geneva 2 where none currently exists. In his PBS interview, however, the president hinted—accurately or not, intentionally or not—that whatever is coming would fall well short of something to be feared.

No doubt the Assad regime and its allies have had some uncomfortable moments over the past few days. Having made the point that US warnings about red lines and game changers can in fact be ignored, the regime may well decide to avoid using chemical weapons from here on out in its relentless campaign of mass terror. To the extent that American security is somehow enhanced by the regime’s exclusive reliance on conventional high explosives to maim, slaughter, stampede, and terrorize its own people, the administration will no doubt claim credit for something or other. It will also likely persist in its view that mass murder in a country surrounded by American allies and friends, while (in the words of the president) “tragic,” merits no humanitarian military response: it “would not help the situation on the ground.” It remains to be seen just how a “shot across the bow” will be better than something real, if indeed President Obama is to be taken literally.