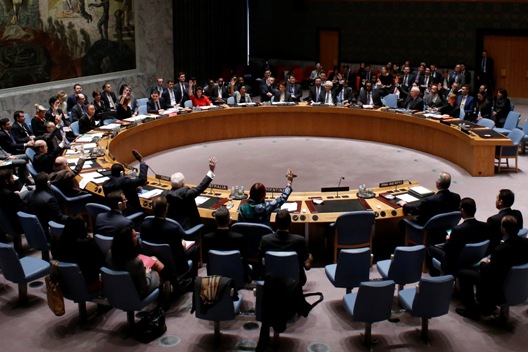 On February 22, 2014 the United Nations Security Council unanimously adopted Resolution 2139, calling on all Syrian parties to cease attacks against civilians, lift sieges on populated areas, allow the delivery of humanitarian assistance, cease depriving civilians of food and medicine, enable the evacuation of civilians desiring to be evacuated, respect the principle of medical neutrality, and promptly permit unhindered humanitarian access for UN agencies and its partners. The Council also condemned terrorist attacks by al-Qaeda and related groups, called for the implementation of the 2012 Geneva Communiqué, and expressed its intent to take “further steps” in the event of non-compliance, asking the Secretary-General to report to the Council every thirty days. The absence of an enforcement mechanism avoided a veto by Russia and China. Indeed, the Russian permanent representative to the Security Council underscored after the vote that there was no “automaticity” to undertaking sanctions, that opposition activities to undermine humanitarian operations must be swiftly and firmly condemned, and that the resolution was approved only after attempts to carry out regime change had proven untenable. Moscow’s complicity in Assad regime war crimes and crimes against humanity may well therefore, in light of permanent representative Vitaly Churkin’s explanation of his vote, continue unabated.

Although Resolution 2139 anticipates reports from Ban Ki-moon every thirty days, the key questions addressed by the Council—attacks on civilians, sieges on populated areas, and unhindered humanitarian access for the United Nations and its partners—will be answered one way or another during the thirty-day period that commenced with the resolution’s passage. By March 24 or so it will be clear whether or not attacks on civilians have ceased, sieges lifted, and United Nations humanitarian personnel going where they want to go in Syria. In all of these cases it will be the performance (or lack thereof) of the Assad regime that determines whether or not there is substantial compliance with the will of the United Nations Security Council.

It follows, therefore, that the key clause of paragraph 13—”those who have committed or are otherwise responsible for such violations and abuses in Syria must be brought to justice”—surely applies to Bashar al-Assad and to key civilian officials and military officers who have implemented and otherwise facilitated a comprehensive campaign of war crimes and crimes against humanity. Yes, criminals operating under the banners of “al-Qaeda, its affiliates and other terrorist groups” must likewise be brought to justice. Yet even though Resolution 2139 contains no explicit recommendation concerning the International Criminal Court, senior officials and officers serving the Assad-Makhluf clan should be on notice: they are part and parcel of a criminal enterprise, and should take steps now to separate themselves from it.

As for the criminality of “al-Qaeda, its affiliates and other terrorist groups,” there is likewise no doubt. Resolution 2139 calls upon “the Syrian authorities and opposition groups to commit to combating and defeating” these terrorists. If Moscow can actually persuade its client to go after real terrorists instead of the mainstream opposition, it would be both welcome and surprising. The resolution “urges the opposition groups to maintain their rejection of these organizations and individuals which are responsible for serious violations of international humanitarian law in opposition-held areas,” thereby clearly establishing a distinction between regime opposition and terrorists—one the regime and Moscow have tried from the beginning to blur and erase.

Resolution 2139, containing as it does specific demands and strong recommendations for ending the premier (to date) humanitarian abomination of the 21st century, is long overdue. Yet it will not enforce itself. Moscow’s material support for a Syrian client neck-deep in war crimes and crimes against humanity makes it complicit in the crime wave that has swept over Syria and the countries adjoining it. Ambassador Churkin’s post-vote remarks do not indicate a change in Russia’s position, even though the resolution itself will not be welcomed in Damascus. It is unlikely that Moscow will support “further steps” if its client demonstrates obduracy. Any attempt by that part of the international community truly offended and shocked by Syria’s humanitarian catastrophe to remove from the hands of the Assad regime its instruments of mass murder and terror will most likely have to made without the endorsement of the United Nations Security Council.