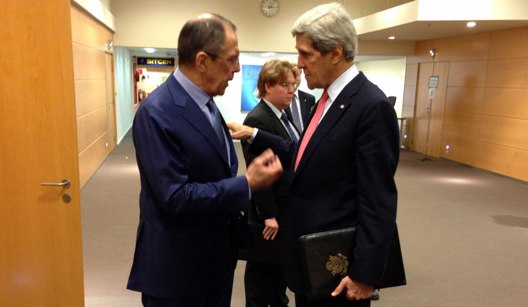 President Barack Obama’s preferred end-state for the Syrian crisis begins with the creation of a transitional governing body peopled on the basis of mutual consent, in negotiations between delegations representing the Syrian Arab Republic Government (SARG) and Syrians rejecting the governing legitimacy of the SARG and the regime that sits atop it. That transitional governing body, exercising full executive power in accordance with human rights standards, would then chart a political course for Syria toward democracy and pluralism. As it does so, it would keep in place—to the extent possible consistent with the human rights mandate—existing civilian and military institutions of the Syrian state.

One would think that President Vladimir Putin would agree with every word of the foregoing. It reflects, after all, the formula for Syrian political transition set forth in the June 30, 2012 Geneva Final Communique: a document agreed to without reservation by the Russian Federation.

Yet does he? Does Mr. Putin actually share common ground with his American counterpart? The evidence to date suggests he may not. Still, the hypothesis that Russia rejects Mr. Obama’s Geneva recipe for saving Syria merits testing. The test is not far off.

Negotiations that produced the Geneva Final Communique centered (and nearly foundered) on the issue of what to do about Bashar al-Assad and his regime. The Assad regime, certainly in the view of the United States, Great Britain, and France (the P3), was defined as a ruling clan and a coterie of military, intelligence, police, and civilian auxiliary enforcers ruling Syria without accountability as the clan’s personal property through techniques of intimidation and terror that even eastern bloc services during the communist era had regarded with envy. In this P3 perspective, the SARG was an administrative arm of feudal clan rule. There may have been honorable and efficient SARG officials, but they exercised no executive power. That was the exclusive province of the regime.

Quite naturally the P3 took the view that regime participation in a transitional governing body was inadmissible: a conclusion that did not necessarily apply to law-abiding officials serving in the SARG. Two United Nations Security Council resolutions had already defined the promised land of Syrian political transition as a democratic, pluralistic system. No one could, with a straight face, argue that a continued role for the Assad-Makhluf clan and its cadre of torturers, assassins, and midnight door-knockers could play a role in creating a system so antithetical to its own modus operandi and survival. Indeed, a continuing role would inject the essence of instability into Syria’s transition. And yet there was resistance on the part of Russia and China (the P2) to saying, in plain language, that which must have been obvious even to them.

In the end, the language adopted (thanks in large measure to the skilled diplomacy of Special Envoy Kofi Annan and his team) buttressed the P3 position while not dismissing the stand of the P2. The mutual consent language meant that Assad regime personnel could be part of the transitional governing body only if the opposition agreed (a highly unlikely eventuality). By the same token, the SARG would be able to veto participation of people it deemed especially objectionable. The full executive power clause indicated P5 consensus on the point that the regime, if excluded from the transitional governing body, would retain no residual governing authority.

Still, elements of the Syrian opposition objected loudly and indignantly, saying that the agreed document had not explicitly, by name, excluded Bashar al-Assad, the ruling family, and its enforcers (AKA the regime) from Syria’s future governance. This outcry was consistent with the hope of some exiles, in mid-2012, that others would do the heavy lifting of installing them in power. What Geneva gave them instead was responsibility; a role in creating a negotiated outcome. As such it was not entirely welcomed.

The dispute over the regime’s future (or lack thereof) that had animated the June 2012 Geneva P5 discussions did not, however, end with the signing of the Final Communique. The P3 (especially the United States), resting its case on the logic of the agreed language, loudly proclaimed that Geneva mandated the removal of the regime; the sooner the better. Russia (with China as a largely silent partner) cited the absence of the name Assad from the document as preserving the hypothetical possibility that a negotiated outcome—one that would, after all, be entirely Syrian in content and composition—could produce an ongoing role for Mr. Assad and his entourage.

Both sides were technically correct. The P3 assessed as zero the possibility that the regime could pass muster with the mutual consent clause, much less play a role in facilitating the Syrian end-state (democracy and pluralism) mandated by the United Nations and upheld by the Final Communique. The P2 did not initially argue the point. Russia (with China’s assent) merely pointed out that Syrians themselves—not Western logic—would determine the outcome. That outcome could, at least hypothetically, include Assad and company, subject to the agreement of the opposition.

In subsequent talks orchestrated by Kofi Annan’s successor (Lakhdar Brahimi), however, Russia reportedly went a step farther by suggesting that the mutual consent and full executive powers clauses applied not to President Assad and his security services, but to the SARG: the ersatz prime minister and his Potemkin cabinet. Put differently, the regime itself would not be the subject of negotiations, a point recently reinforced by the SARG foreign minister.

Moscow’s objective, obviously, was to make the Geneva political transition process all about the creation of a national unity government: a prime minister and a council of ministers, leaving Assad and company untouched and in place. The United States pointed out the obvious: the SARG has no executive power; all of it rests with Assad and his regime. Political transition would be devoid of meaning if Syria’s political center of gravity were excluded from the process. Evidently that was precisely Moscow’s objective.

Whether or not the Assad exemption remains Russian policy, its very tabling indicated that Presidents Putin and Obama were not on the same page or in the same book as to Geneva’s meaning and mission. Whether or not they are now depends not on what Moscow says about the desirability of Geneva 2, but what it does to make it produce a real transition from murderous feudalism to something civilized and decent.

One view of Russia’s position holds that Mr. Putin already has the entirety of what he wants for the time being: a chemical weapons agreement with the United States—one endorsed by the United Nations—that eliminates the possibility of American military strikes, accords to Assad the status of essential party to a long-term contract, and enables the regime to pursue its survival strategy of mass terror provided none of it involves chemicals; a strategy that has the additional benefit of inconveniencing and even imperiling American allies and friends in the region while showcasing the resurrection of Russia as a player of great consequence on the world stage.

This view holds that President Putin wishes, in the end, to make the following point: “Russia stands by its business associates, even the war criminals among them. When Russia commits itself to a partner, that party survives. Compare and contrast this achievement with the performance of others.” This would be a variation of the Godfather 2 line about Hyman Roth always making money for his partners. Is this in fact Moscow’s game? Is there a respectable alternate hypothesis? Perhaps there is.

Is it beyond belief that Mr. Putin actually sees the Assad regime as absolute poison for Russian interests in the region and beyond: a particularly noisome family enterprise that has actively encouraged an al-Qaeda presence in Syria, replete with foreign fighters, so as to crowd out a legitimate nationalist opposition in an attempt to make the regime the fire brigade to be paid for saving the building it has set alight? Russian protestations to the effect that they have no particular affection for Bashar al-Assad are undoubtedly sincere. Moscow would agree, on the basis of decades of hard experience dealing with the regime, that Mr. Assad and his late father have streets named after them all around the world: “one way.”

It is arguable that President Putin sincerely believes Russia was duped in the case of Libya and that Barack Obama is, notwithstanding the occasional indication to the contrary, hell-bent on using American military power to effect regime changes all over the planet. Finally, it is not necessarily foolish to posit that Vladimir Putin wants to play a central role in a genuine Syrian political transition, but one entailing provisions providing a gentle safe exit for Mr. Assad, his clan, and his enablers.

Secretary of State John Kerry, as he probes the feasibility of a November Geneva 2 conference, will put these hypotheses to the test. The test will revolve around Russia’s readiness to facilitate a conference worth convening.

Is Russia willing to make it clear to Bashar al-Assad that it wants to see a Syrian delegation at Geneva prepared and authorized to discuss a genuine, complete political transition in accordance with the literal Geneva formula? Is Moscow willing to spell out consequences if Assad upholds the stated view of his foreign minister that his status is not up for discussion; that Assad will rule Syria (or at least part of it) irrespective of what happens at Geneva?

Is Russia willing to make a productive Geneva conference possible by telling Assad that terror attacks on populations he does not physically control must stop forthwith? Is Moscow willing to spell out security and arms-transfer consequences if Assad merely thanks Russia for its interest in Syrian affairs and sends his interlocutor packing? Would Russia then implement those consequences? Would it really consider empowering Lakhdar Brahimi in this manner, turning off the spigot until Brahimi reports that he is getting full cooperation?

Is Russia taking into account the totality of its relationship with the United States and the inevitability of bilateral interactions extending far beyond the life of the Obama administration? Is it willing to work with the United States to produce a result in Syria reflecting the aims of Geneva, one that by definition would eliminate Islamist extremists and a clan-based regime whose survival strategy and operational excesses have attracted to Syria foreign fighters subsidized by private Gulf money?

These are questions for which Russia alone has answers. The United States will compel nothing, but will watch carefully. If Mr. Putin decides he has already obtained all that he needs from the Syrian situation, fine. There will be American presidents—perhaps even the incumbent—who will draw the proper conclusions and act accordingly in ways far transcending the crisis in Syria. Who knows, there may already be a modern day George Kennan drawing those conclusions and charting a way forward.