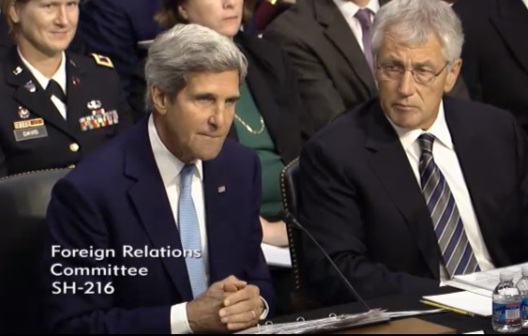 Washington’s on the move—sort of. The Assad regime used biological and chemical weapons (BCWs) to kill thousands of people in rebel-held areas around Damascus on August 21. Having resisting the impulse to intervene for more than two years, the Obama administration has now committed itself to act—again, sort of.  Morally, of course, Washington’s missed the mark; mass murder is mass murder. The regime has killed far more people through purportedly civilized means: missiles, mortars, bombs, bullets, knives, rope, and so on. (Moreover, the Assad regime is chiefly responsible for creating Syria’s catastrophe.)

Even so, Washington had repeatedly—and waveringly—set red lines on the use of BCWs. Because the regime has crossed these lines, having now just flagrantly and brutally disregarded them, Washington believes it must respond with force.

But Washington is not running—and should not run—on Twitter Time: To act, at the very least, it must concurrently assess available intelligence, assemble coalitions, justify action, prepare to execute effectively, and manage its message. On the one hand, Washington has performed admirably in assessing its intelligence, justifying its actions, and preparing to strike in Syria. On the other hand, the clock did not start two weeks ago. To its utter embarrassment and with real consequences in Syria and beyond, it has performed terribly in assembling coalitions and managing its message.

Washington has performed remarkably in assessing available information. Within a week of the attack, Washington had assessed with high confidence that the Assad regime used BCWs to kill hundreds, perhaps thousands, of people. Relying on “multiple streams” of human, signals, and geospatial intelligence—that’s people, phones, and photos—the US intelligence community refrained from “confirming” (or “slam dunking”) its findings.

The facts are clear. Washington has assessed the relevant chain of custody, delivery methods, targeted and originating areas, imagery, and certain intercepts, among other information. To be sure, doubts will linger—and would have lingered no matter what. But an administration that has resisted intervening in Syria probably would not fabricate facts compelling it to act. Nor would it hurriedly run with others’ facts. What’s more, in the shadow of Iraq, the US intelligence community, top diplomats, and senior policymakers have an elevated interest in carefully parsing through the information and not rubberstamping political conclusions. Call it a conclusion: The Assad regime gassed its people.

The Obama administration has unsurprisingly sought to build domestic and international coalitions to support prospective strikes in Syria. But it has scrambled to compensate for a failure to plan ahead, probing for possibilities instead of prodding towards a policy.

At present, domestic politics don’t support adventurism abroad. Since 9/11, the United States has fought four overt wars—sorry, “armed hostilities”—in the Middle East: Afghanistan/Pakistan, Iraq, Yemen, and Libya. With fatigue having long since set in, the Obama administration must also contend with fiscal challenges, resource constraints, ongoing realignment, and forthcoming mid-term elections. In terms of policy, bipartisan support—especially express congressional authorization—would allow Washington to plan for contingencies or prolonged campaigns more comfortably. In terms of politics, bipartisan support would allow the Obama administration to wage war while ensuring that legislators put their name on Syria too.

Internationally, Washington needs a coalition to share costs, broaden legitimacy, open legal doors unavailable to a unilateral actor, and counteract diplomatic noise from Russia, China, Iran, and other stalwarts of the international community. Absent collective action under a UN Security Council mandate, a coalition of the Arab League, NATO, and a collection of like-minded states—perhaps backed by the UN General Assembly—would be ideal.

Sure, prudence demands that the Obama administration eschew its significant constitutional and legislative leeway to use military force outside of the United States and its territories. Congress needs time; the world needs time. But President Obama’s team knows this better than most—and are perhaps glad they have a few days to make up for lost time.

Lawfare: Justifying Action under the US Constitution and International Law

Washington has done well to justify its actions on the podium, but full legal justifications will depend on how events unfold in the coming weeks. Among other things, it must account for available facts, desired actions, and prospective coalitions. As noted, the facts are clear: The Assad regime gassed its own people. Barring operational surprises, which are unlikely to appear in public briefs, the military options are clear too: Tomahawk strikes, aerial sorties, and cyber-attacks against a relatively limited set of targets. Thus, while legal eagles will diverge as Americans and Brits already have, their parameters are set.

Coalitions may present a challenge. Domestically, for instance, the Obama administration would be able to justify its actions differently under broad or limited legislative authorization, tacit support, silence, or dissent. Under international law, Washington’s legal justifications will depend heavily on the sort of coalitions it forms. Doubtlessly refining briefs for each scenario, the lawyers will wait—along with Washington, it seems, and the world.

Whatever its other shortcomings, Washington has rapidly positioned itself to strike. While existing US forces in the region may have permitted punitive strikes against the Assad regime, the United States has, at the very least, increased its options. Now, alongside Patriot missile batteries in Turkey and Jordan, hundreds of planes and an untold number of drones in the area, and hackers on stand-by, the United States has deployed at least six ships—destroyers and amphibious transport vessels—to fly the flag in the Eastern Mediterranean.

To strike in Syria, the United States must prepare to execute in prime time. Striking forcefully enough to punish and deter Assad and his allies, and—as far as the Obama administration is concerned—must calibrate its strike to avoid toppling the Assad regime, triggering retaliation in the region, or compelling escalation within Syria. Moreover, the United States will look to avoid civilian casualties, minimize collateral damage, and prepare for further action.

Washington has utterly mismanaged its message on Syria. Of course, notwithstanding failures to plan effectively, Washington needs time to act. Fine… But if that’s true, then the Obama administration—or perhaps the President—seriously mismanaged the message.

Initially, as statements trickled out from senior administration officials like US Ambassador to the United Nations Samantha Power and US Secretary of Defense Chuck Hagel, the Obama team seemed to be on track. Paving the way for the president, officials spoke in ascending order of rank, with increasing gravitas, with more convincing rhetoric, and in more formal settings. Continuing to crescendo, US Secretary of State John Kerry then beat the drums of war.

But by mid-week, President Obama—the Communicator-in-Chief, the Professor of the United States—emerged in a series of interviews, statements, and speeches. With his team moving in one direction, he moved in another. He announced that he was considering his options, that he had not decided whether to strike, that he believed the menace should be punished, that the military was ready, that he would calibrate strikes, and that he believed he should order strikes, but that he was referring the question to Congress.

Even before the President declared that he would seek congressional authorization, he and his team misconceived, over-communicated, and then miscommunicated his message throughout the week leading up to Labor Day. Even if Tomahawks were cruising towards Assad regime targets right now, the President telegraphed his intent and effectively explained deterrence away before then deferring to Congress. Ultimately, whether the President chooses to punish or cripple the Assad regime, he’ll have squandered time, money, and patience for the illusion of clean hands.

And he’ll have lost policy somewhere between politics, process, and the podium.

Anthony Elghossain is an attorney at a global law firm based in Washington, DC. He writes the Diaspora Diaries at NOW. Follow him @aelghossain