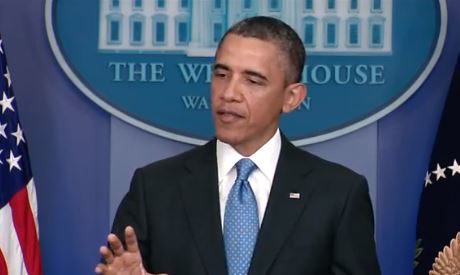 The real significance of Syria’s likely crossing of US President Barack Obama’s chemical weapons red line may be that it will focus the administration’s attention on here-and-now Syria policy options as it has not been focused heretofore. As the president said in his April 30 press conference, regime culpability in using chemical weapons would force him “to rethink the range of options available to us.”

By employing the red line rhetoric in the first place, the president probably decided in his own mind that there were conceivable circumstances in which he would do that which he has earnestly wished to avoid: employ military force of some kind against the regime of Syrian President Bashar al-Assad. Otherwise the rhetoric itself would be the kind of bluff the president has said he will not make. Now it is incumbent on the interagency national security system to produce options and recommendations for presidential consideration and eventual decision, even as facts related to strong allegations of chemical use are being sorted out.

The White House acknowledged in an April 25 letter to US Senators Carl Levin and John McCain that the US intelligence community believes “with varying degrees of confidence” that the Syrian regime has used the chemical agent sarin as a weapon “on a small scale in Syria.”  The letter reiterated the president’s warning that the use of chemical weapons (or their transfer to terrorist groups) would be “a red line for the United States of America.”  The potential consequences of the red line being defied makes it, in the view of the administration, mandatory that the United States “fully investigate any and all evidence of chemical weapons use within Syria.” According to the White House letter, “That is why we are currently pressing for a comprehensive United Nations investigation that can credibly evaluate the evidence and establish what took place.”

Critics immediately concluded that the administration was trying to blur or even erase the red line by consigning the matter to the United Nations, that it was ignoring its own intelligence community and those of the United Kingdom and Israel, and trying to evade the consequences of strong presidential rhetoric—an evasion that would severely damage the credibility of the United States. It is premature to come to such a damning conclusion; indeed, the administration may well have something entirely different in mind.

Nowhere does the letter say that the United Nations will be the final judge and jury in this matter. The fact that the United States is “currently [emphasis added] pressing” Syria to admit UN investigators implies only that the pressing may not be permanent. Syria has already rejected the investigation, and might continue to do so. Even if the regime were to give UN personnel free rein to investigate all reported chemical weapons usage, it is quite possible that investigators will not be able to reach firm conclusions. The passage ignored by some critics may be instructive in this regard: “We are also working with our friends and allies, and the Syrian opposition, to procure, share and evaluate additional information associated with reports of the use of chemical weapons so that we can establish the facts.”  The objective, Obama said in his April 30 press conference, is “to make sure I’ve got the facts.”

If one assumes that (at the very least) a stronger circumstantial case of regime chemical weapons use emerges from a multifaceted investigation, how might the administration react?  The only clue revealed by the president in his news conference had to do with avoiding “rushing to judgment” in a way that would prevent the United States from mobilizing “the international community to support what we do.”  Although the “international community” need not necessarily include all five permanent members of the UN Security Council joining together in support of a tough UN resolution, no doubt the president envisions doing something that he could explain and justify to the widest possible spectrum of international actors. Indeed, were the administration to conclude that the Syrian regime did use chemical weapons, it might first offer the Assad regime an opportunity to rid itself of all of the materials in question by means of an internationally supervised process. The regime’s refusal to take the requisite steps would enable the administration to make a strong case internationally for punitive military actions; actions that need not be authorized by a UN Security Council resolution.

Yet the administration should also be examining military options (lethal assistance to the opposition, removal of regime military air and missile assets, no-fly zones, etc.) independently of the chemical weapons question. There is a danger to be avoided: making any and all prospective US military actions concerning Syria dependent on chemical weapons use findings. In the time it will take the United States to gather relevant evidence, examine it, deliberate, and come to a defensible factual judgment concerning chemical weapons, the regime’s terror campaign of employing conventional weaponry against civilian populations will kill many, maim many others, and send many more racing for international borders and internal refuge. Although the red line rhetoric combined with analytical conclusions reached by the intelligence community will no doubt drive an interagency process producing options and (ultimately) decisions, the president should not volunteer to have his hands tied by the chemical red line. It seems reasonable to expect that, at the least, a strong circumstantial case of regime chemical use will be built (if it does not already exist). Yet the president himself has held open the possibility that the facts he is seeking may not, in the end, substantiate that which other intelligence services and elements of his own believe to be true. At the same time, the Assad regime is a palpable threat to the peace of the region whether or not it used sarin gas against its own people.

The president says he remains committed to the quest for a negotiated end to the Syrian nightmare, one consistent with what was agreed by the five permanent members of the UN Security Council on June 30, 2012, in Geneva. US Secretary of State John Kerry will likely be discussing this subject with his Russian counterpart in Moscow in the near future, but it is unlikely that Russian President Vladimir Putin will cooperate with the Obama administration in this matter.

The best steps the United States can take to facilitate the negotiations it desires are to help the opposition form a coherent, effective government in liberated parts of Syria, and to help that government defend itself and alter the military situation on the ground to the disadvantage of the regime and its allies. It is hard to imagine anything short of these steps actually changing Assad’s calculation with respect to peaceful transition talks. If these steps are taken, however, the United States can realistically continue to pursue a negotiated political transition consistent with the Geneva agreement, one that would produce a new Syrian government on the basis of mutual consent by regime and opposition negotiators; one that would relieve the regime of all executive powers, making Assad either a private citizen or a president in name only. These too are steps that should be pursued vigorously irrespective of the outcome of the chemical weapons inquiry.

The chemical red line issue is too important to be deemed a distraction. It is not, however, the sum total of the threat to the peace posed by a reckless regime consciously turning Syria into a sectarian free-for-all to the peril of the Syrian people and their neighbors. While a clear finding of regime chemical weapons use will oblige the president to take harsh steps designed as much to preserve his credibility as to punish the regime, the sum total of the regime’s survival strategy may require him to act in ways he has sincerely wished to avoid—even if a conclusive chemical weapons case cannot be made.

Frederic C. Hof is a senior fellow of the Rafik Hariri Center for the Middle East at the Atlantic Council and the former special advisor for transition in Syria at the US Department of State. Photo credit.