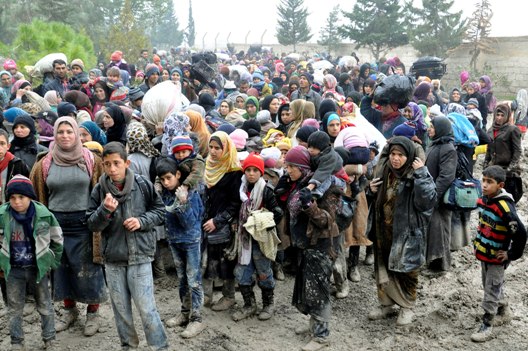 US policy toward Syria is stalled in a cul-de-sac. It occupies the strategic low ground between an August 2011 presidential call for Bashar al-Assad to step aside, the June 2014 eruption of the Assad-conjured Islamic State (ISIS or ISIL) into Iraq from Syria, and the administration’s resolute reluctance to act in accordance with a fundamental fact: ISIL will be defeated neither in Iraq nor in Syria so long as Assad family-rule remains in place. ISIL is, in large measure, the monster created by a viciously sectarian survival strategy featuring mass murder, one pursued by the Assad regime since March 2011. Yet the administration, eager to accommodate that regime’s strongest supporters (Iran and Russia), reportedly perceives value in Assad staying on for a while. How else to explain tepid support for those fighting both ISIL and the regime? How else to justify flirting with a Russian diplomatic initiative designed to fragment and destroy the nationalist opposition to Assad and ISIL?

This is not to say that the dream of Assad regime apologists—active, conscious collaboration between the regime and the United States against ISIL—is about to come true. Far from it. President Barack Obama has labeled Bashar al-Assad a mass murderer. As recently as January 15, US Permanent Representative to the United Nations Samantha Power noted, “Assad, those around him, and any individuals overseeing or complicit in the commission of serious crimes in Syria must know that they will be ultimately held accountable. That is why the United States is actively supporting the collection and preservation of evidence to support future justice processes in a variety of jurisdictions for war crimes and other human rights violations, including those involving sexual and gender-based violence.”

Therefore, it is not as if President Obama rejects the notion that Bashar al-Assad has a date with the hangman. It is not as if his administration sees utility in throwing in with ISIL’s number one recruiting asset. It is not even as if anyone in the administration sees genuine merit in prolonging the tenure of a regime, which, according to Ambassador Power’s January 12 remarks at the University of Louisville in Kentucky, has (along with ISIL) “produced the worst humanitarian disaster in a generation. More than 12 million Syrians—a population nearly three times the population of the entire state of Kentucky—currently need humanitarian aid to survive. Five million of those in need are children. Five million kids. Yet the Assad regime continues to use the suffering of civilians as a cynical tactic of war, cutting off entire communities from food, water, and medicine simply because they live in cities or neighborhoods controlled by opposition groups.”

No one, not even regime apologists, can argue convincingly that this civilian-centric policy of mass murder and mass terror provides stability in an otherwise chaotic country. Those in the administration who background journalists on the supposed dangers of Assad departing too quickly are in full alibi mode.

The problem is not that the administration sees merit in Bashar al-Assad: the problem is that Iran and Russia do. This is why the administration does not draw an operational link between what it knows about the Assad regime’s role in making Syria safe for ISIL and the mission to degrade and ultimately destroy the self-styled “caliphate.” This is why the president adopts an “ISIL first” approach to the collapse of Syria and Iraq and an “Iraq first” approach to ISIL, even though the Syria-Iraq border is gone and Iraq was nearly drowned by a tidal wave of fighters originating in Syria. This is why the United States is reluctant even to gather and analyze ISIL-related targeting intelligence from anti-Assad nationalist rebels inside Syria. To decry the destabilizing, ISIL-facilitating brutality of the Assad regime is one thing. To do anything at all about it is something else entirely. The gap between talk and action is impressive.

That the world’s sole superpower finds itself bound—though not gagged—with respect to murder and mayhem in Syria seems to have much to do with Iran. It is understandable that President Obama wants to achieve with Tehran an agreement that would prevent it from fielding nuclear weapons. It is defensible for him to think (or at least hope) that such an agreement would empower “Iranian moderates” to reorient politically one of the world’s great civilizations. It is arguable that strong measures against the Assad regime—whose continued existence is vital to Tehran—could derail the nuclear talks, dislodge the diplomatic jewel from the legacy crown, and encourage Iranian-backed militiamen in Iraq to attack US forces. The reported written assurance by President Obama to Iran’s Supreme Leader last October that Assad was not the target of American military operations in Syria is at least consistent with these beliefs.

One may argue that US immobility in the face of Iranian (and Russian) abetted mass murder in Syria is not the way to persuade the Supreme Leader (or Russia’s Putin) that the United States is a serious adversary and a worthy interlocutor. One may argue that the last thing in the world one would deploy in a negotiation would be a preemptive concession, one guaranteeing the inviolability of the opposite number’s key asset: the asset that facilitates Iran’s penetration into the Arab world and (via its Lebanese militia) its missile threat against Israel. One may argue that the Supreme Leader should be taken literally when he describes the United States as a permanent enemy of the Islamic Revolution, one to be confronted even if a nuclear agreement is achieved.

One may, in short, waste one’s time. President Obama has no illusions about the merits of the Assad regime. Yet it seems unlikely that he will abandon any of the bedrock beliefs that have created an unbridgeable chasm between the way the administration talks about Syria and the way it acts—or more precisely, fails to act.

Is there anything the administration can do to mitigate Syria’s unspeakable suffering while clinging to the essentials of its “avoid the slippery slope, don’t upset Iran” approach to ISIL’s rise amidst a world-class Syrian humanitarian abomination? Perhaps it would consider one or more of the following:

None of these steps—either singly or collectively—will rescue the United States anytime soon from the cul-de-sac it has entered; the diplomatic dead-end in which it has voluntarily resided. If the administration wishes to empower ISIL by looking the other way as the Assad regime—to cite Samantha Power—repeatedly uses chlorine and barrel bombs against civilians while it “continues to systematically use torture as a means of inflicting suffering and extracting information,” then it will continue to look the other way operationally even as Ambassador Power speaks. In so doing, it will earn the respect of no one: surely not the Iranians it wishes so earnestly to reassure.