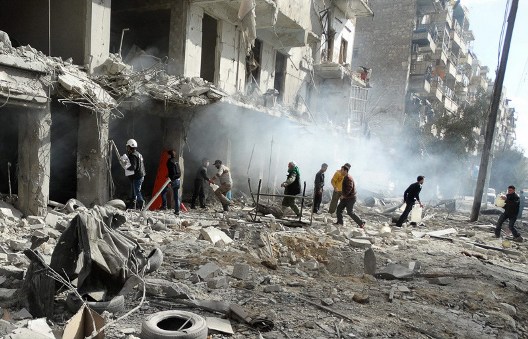 When Bashar al-Assad authorized the shooting of peaceful demonstrators in Deraa three years ago, no one foresaw the destruction of Syria, and no one could have imagined the enormity of human suffering and political instability that would flow from such a craven and stupid decision. The citizens of Deraa had handed Assad the opportunity to be President of Syria in fact as well as in title. Yet his contempt for them overruled their hope in him. Cries for justice, dignity, and protection were met with bullets, incarceration, and torture. Three years later, he who would offer himself in a sham election for yet another term as president of the republic has yet to utter a word of regret over what has happened to his country and its people. The reason for this is simple: there is no regret. From the standpoint of the Assad regime most of Syria’s people are animals to be herded, beaten, starved, and slaughtered.

The Obama administration has been understandably leery of overextension, chasing crises, and sliding down a slippery slope into the morass of yet another Middle Eastern war. The administration sees Syria as an unspeakable humanitarian calamity and as a threat to regional peace and stability. Yet, it also sees it as a Tar Baby not to be touched; as someone else’s civil war. Regrettably its rhetoric about people stepping aside and red-lines not to be crossed has misled friend and foe alike in ways not advantageous to the United States. It would have been better had President Obama avoided the gap between talk and action. As it is there is nothing about the administration’s Syria performance that heartens allies or gives pause to adversaries. One need not go over the top and blame Barack Obama for what is happening in Ukraine. Still, words matter, and those in government who purport to oversee strategic communication should be more sensitive to this reality than anyone. That they are not is a real liability.

There is talk within the administration of strategic reappraisal in the context of Syria. The reality is that systematic policy reviews are difficult under the most benign of circumstances, but next to impossible in the absence of clear parameters and guidance from the top: what the military might refer to as “the commander’s intent.” In the wake of the failed Geneva II negotiations there has been no shortage of interagency meetings aimed at answering the question “What in the world do we do now?” Sadly these meetings—as they have for nearly three years—are reportedly very long on analysis and very short on decisions or recommendations related to action. In the absence of knowing the commander-in-chief’s overall intent there is no limit to the interagency’s circular pursuit of its own tail.

What is the end-state President Obama desires for Syria? What is his sense of the risks involved for the United States—in conjunction with allies and friends—in bringing about the desired end-state? What factors would he want his interagency national security system to take into account in its planning process, as it shapes options for him to consider? It is simply unproductive to convene meetings and encourage discussion of policy alternatives if there is nothing from the top defining intent and establishing parameters.

The best case for Syria and for the credibility of the United States would be one in which the president upholds the operational relevance and directive nature of his August 2011 step-aside language and permits the interagency national security system to go back to the drawing board in creating options for his consideration. The worst case would be one that continues to permit the strategic communicators to broadcast the inadmissibility of what is happening in Syria, but coupling that message with operational inaction justified by excuses ranging from someone else’s civil war, to the purported failure of mass murder to achieve the definition of genocide, to the all-or-nothing argument that anything with a military dimension amounts or leads to the invasion and occupation of Syria.

A potential third way would be for the administration to cooperate with a comprehensive review of the Syria policy bidding by a non-governmental, bipartisan Syria Study Group modeled on the 2006 Iraq Study Group. The existence of a Syria Study Group would in no way obstruct the ability of the administration to do its own honest reappraisal of US interests, objectives, and strategic options in the context of Syria. Yet a six-month (maximum) reassessment guided by Republican and Democratic co-chairmen resulting in a report reflecting the best expertise extant on US national security policy and the situation in and around Syria can do no harm. Indeed, it can inform a national discussion of how the United States can best mitigate an abomination whose first three years may be only the opening chapter in a multi-volume horror story.

Image: A rescue team arrives at a building following an air strike by Syrian government forces on January 30, 2014 in the northern Syrian city of Aleppo. (Photo: Freedom House/Flickr)